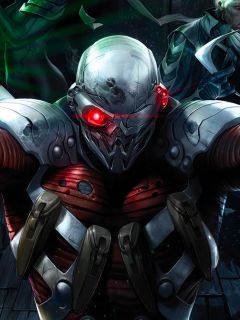 Deadshot is the greatest known mercenary in the world. He's known to never miss and always get the job done, but lately it appears he may be shifting to a more heroic side of the law.

Deadshot is the DCU’s greatest marksman, boasting that he never misses. In his childhood, his mother and father had a deep hatred for each other. His mother went so far as to hire Floyd and his brother to kill their father. While Floyd had no great love for his father either, he did not want his blood soiling his brother's hands, and refused. His brother then accepted to kill their father, and locked Floyd up so he couldn't stop him. Escaping, Floyd took a rifle, went up a tree and aimed towards where his brother was about to kill their father. But the branch broke and his aim was off, killing his idolized brother rather than his hated father. He has lived what he sees as a meaningless lifestyle from then on, accepting hits in hopes that he will one day be killed himself.

While he's not suicidal, he continually dances over that line, never caring whether he lives or dies. This lifestyle has made Deadshot nearly homicidal as well. He first appeared in Gotham City as a new crime fighter, but it was revealed that this was only an elaborate hoax to replace Batman. When this scheme failed, he attempted to head the Gotham underworld, but was exposed and arrested by Batman and Commissioner Gordon.

After he got out of jail, Deadshot became a hired assassin, and has been a great help in the past two Suicide Squads. When he was on hiatus from the squad, his son was raped and killed by a pedophile. Floyd took revenge on the man. Later, his suit was stolen by an airport employee, who began to steal and kill with it. Deadshot killed him, but killing his own image affected him. He didn’t even fix the bullet hole in the costume for a long time. During the Suicide Squad’s last mission, Deadshot was asked by Count Vertigo if he would kill him. Deadshot agreed, and both of them went to a secret location to await Vertigo’s decision. He declined, and Deadshot did not question the decision.

Later, when he was under Neron’s influence, he tried to kill an entire kindergarten class with an explosion, but was stopped by the Justice League. Deadshot was offered North America if he joined the Secret Six, and was threatened that if he didn’t join the team, he would have his daughter’s neighborhood blown up by Mockingbird (Lex Luthor). A stalemate was reached at the end of the series, and Deadshot’s status remained unchanged. He was found in bed with Knockout, but she revealed that she was only using him. During this run, Deadshot was confronted by his teammate Catman, accused of slaughtering the pride of lions he had been living with, planting evidence against the Secret Society of Super Villains in order to force his joining to the Secret Six. Catman eventually forgave Lawton, and they remained something between friends and enemies. This fits with Deadshot's unconscious desire to give other men the place of the brother he killed, be it Catman, Batman or Rick Flagg. All of them, at different points, acted as Deadshot's surrogate brothers of a sort, particularly Catman and Flagg.