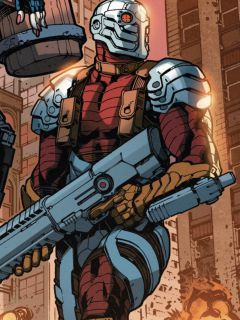 Floyd Lawton, also know as Deadshot, is the “man who never misses” - an assassin with an almost superhuman marksmanship skill. His villainous activities against Batman quickly landed him a spot on the Suicide Squad, where he soon became one of there most effective and notorious members.

According to Deadshot himself, as a child, he lived with his mother, father, and sister. His family was in a constant struggle and was very poor. One night, when his father was informing his mother the good news that he had gotten a job, the two were gunned down by bullets coming from the next room. Along his parents, Floyd’s sister was also killed in the hail of gunfire. After this, Floyd discovered a gun in the next room and began teaching himself to use it. He would eventually become a very skilled marksman and use his skills as a gun for hire.

However, Deadshot’s public origin story actually belonged to Will Evans, a man Lawton shared a prison cell with while serving time.

In actuality Floyd’s family was quite wealthy, with an estate outside Gotham. Their public image hid the fact that his father, George was an abusive drunk. His mother, Genevieve, suffered many beatings from George and took her frustration out on Floyd and his brother Eddie. Despite this, Eddie was a great son, good natured and athletic, often taking beatings meant for Floyd.

Eventually, Genevieve had had enough and encouraged Floyd to shoot his father. Young Floyd scaled a tree and took aim at his father. His nervousness caused him to flinch. The shot missed his father but hit Eddie between the eyes, killing him. Floyd made two promises to himself that night, one never to miss again, two kill his father the next time he saw him.

After years of training, Lawton became so skilled with shooting, he became Deadshot.