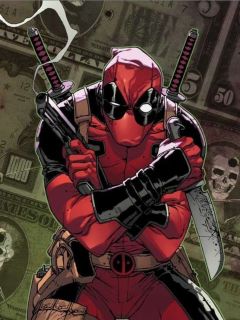 Deadpool possesses a superhuman healing factor derived from that of the mutant Wolverine that allows him to regenerate damaged or destroyed bodily tissue with far greater speed and efficiency than an ordinary human. Deadpool is able to heal injuries such as slashes, puncture wounds, bullet wounds, and severe burns within moments. His healing factor is significantly more powerful than Wolverines as he can regrow missing limbs and organs and has survived blades through his brain on several occasions. His head or any other limb can be reattached using this ability, but has to be placed in the proper place. As Deadpool had cancer at the time of the gene therapy which endowed him with these abilities, it bound to the "healing factor" so that in a sense the cancer is his healing factor, which is why his skin is still horribly scarred. Unlike Wolverine’s natural healing factor, Deadpool’s is mentally driven to a partial extent.

Deadpool's body is highly resistant to most drugs and toxins. For example, it is extremely difficult, though not impossible, for him to become intoxicated (Blind Al made several references to Deadpool being hungover since he once drunkenly spoke to the Telletubbies on the TV he was watching). He can, however, be affected by certain drugs, such as tranquilizers, if he is exposed to a large enough dosage.

The unique regenerative qualities of Deadpool's healing factor also extends to his immune system, rendering him immune to the effects of all known diseases and infections.

Deadpool's healing factor provides him with an extended lifespan by slowing the effects of the aging process to an unknown degree. His life span is extended to such a degree, that an alternate reality version of him was alive and still in business as Deadpool 800 years in the future. Deadpool has established a relationship with the personification of Death and as a result has been cursed by Thanos, to be unable to die.

The healing factor causes his brain cells to be in a constant state of flux and regeneration, rendering him immune to psychics such as Professor X and Emma Frost. Recently Deadpool has not demonstrated this ability. He was able to be telepathically linked to the rest of the X-Force team by Psylocke and has fallen under mind control of Shadow King.

Deadpool possesses great, though not unnatural, physical strength. However, he does have at least the strength of an Olympic level weightlifter. He is capable of lifting at least 420 lbs but no more than 800 lbs.

Deadpool's musculature generates considerably less fatigue toxins than the muscles of an ordinary human being, granting him superhuman levels of stamina in all physical activities. He can physically exert himself at peak capacity for several days before boredom or stress takes over, and could have possibly go on further.

Deadpool's agility, balance, and bodily coordination are enhanced to levels that are beyond the natural physical limits of even the finest human athlete.

His reflexes are similarly enhanced, superior to those of even the finest human athlete.

Deadpool has superhuman speed thanks to Weapon X, but he sometimes relies on his teleportation device.

Deadpool is an extraordinary hand-to-hand combatant and is a master in multiple unarmed combat techniques. He has been shown fighting such amazingly skilled fighters as Wolverine and Taskmaster and even defeating them in hand to hand combat. This shows that Deadpool himself is among the most skilled fighters in the Marvel universe.

He is a master of assassination techniques, espionage methods, covert operations, infiltration methods, escape artistry, marksmanship, and is highly skilled with many bladed weapons (frequently carrying two swords strapped to his back), and a number of other weapons including firearms.

He is fluent in Japanese, German, Spanish, Russian, Pashto, Urdu.

Possibly as a result of his mental state, he is aware that he is fictional and in a comic book.