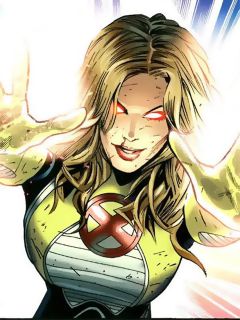 She has the ability to transduce sonic vibrations, which reach her body into various types of light. This ability seems to operate over a great range of frequencies, including the audible spectrum (35 to 16,500 cycles per second), and a great variation of sound pressure levels regardless of the complexity, dissonance, or randomness of the sound. For example, a car crash and a symphonic passage of equal duration will both produce usable music incoming acoustic vibrations. Dazzler, however, does prefer the sound of music, particularly that which is rhythmically sustained. Not only is music more pleasant to her ears, but the steady beat of popular music provides a more constant source of sound to convert. However, she cannot use any sound produced by her own body.

She has the ability to release the absorbed sound in one burst.

Dazzler possesses a body-wide energy field that controls the energy levels of the outer electron shells of her body in such a way as to cause the cascaded release of photons. In effect, this field is lasing, with the apparent efficiency of a laser (99.9%). The released energy is far greater than the incoming kinetic energy and therefore must involve an outside energy source, the nature of which is unknown. Left undirected, the Dazzler’s light will radiate from her body in all directions, producing regular flashes of white light (white light is a mixture of all portions of the visible spectrum). By conscious control over the light she produces, she can control its direction, frequency (color), amplitude (intensity), and duration. Apparently the Dazzler must consciously or subconsciously will the light to leave her body. Otherwise, light would “leak” from her at all times, even when she is asleep or unconscious. She can produce numerous effects with the light she converts from sonic vibrations. She can create very simple patterns out of rays of light like circles, squares, triangles, and stars. She can create a pulse of light on the order of several thousand watts seconds of power, which temporarily blinds people with its brilliance. She has learned to manifest her light as:

By concentrating, Dazzler can generate a coherent beam of light, approximating a laser beam, with which she can cut through virtually anything. The field thus operates in a similar fashion as the process that creates a laser (Light Amplification by Stimulated Emission of Radiation) and apparently has the same efficiency as a laser (99.9 percent). The released energy is far greater than the incoming kinetic energy and therefore must involve another, unknown energy source as well.

She can generate a blast of concussive solid light.

She can cause a bright glow all about her body to create light.

She can generate a pulsating strobe-light effect.

She can create a chaotic cascade of sparkling lights and colors that severely upsets other people’s equilibrium.

With effort, she can even create holograms of human beings and other three-dimensional beings and objects.

She has the ability to gain vertical altitude by direction a quick column of light beneath her.

She has the ability to create a destructive shield of light around herself with laser light that can vaporize small, oncoming projectiles.

Her body, especially her eyes, shields itself against any injurious effects of her light transducing abilities, and against those of bright lights in general

She has the ability to transduce sound also protects her from being deafened by loud noises.

She is presently afflicted with a mysterious resurrection factor which prevents her from being killed by conventional methods.

Dazzler is a highly skilled athlete, and has become a good hand-to-hand combatant thanks to her training with the X-Men.

She is a talented singer, actress, dancer, as well as a highly accomplished roller skater.