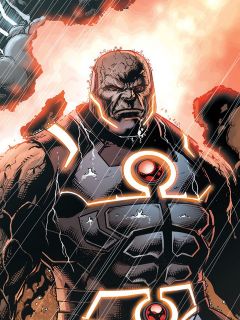 Darkseid is the ruler of the planet Apokolips, a post he obtained after assassinating his mother. He is obsessed with finding the Anti-Life Equation in order to use it to rule the universe. This goal also includes conquering his rival planet, New Genesis, ruled by the Highfather, formerly Izaya the Inheritor. The resulting destructive war is stopped only with a diplomatic exchange of the Highfather's and Darkseid's infant sons. Darkseid's Orion is surrendered to the Highfather while Darkseid receives Scott Free, who will later become the master escape artist Mister Miracle. This turns out to be a setback for Darkseid with his biological son growing up to fiercely value and defend the ideals of New Genesis in opposition to his father.

Darkseid was one of the featured villains in the (non-continuity) crossover of the Teen Titans and Marvel comics' X-Men. Like most crossovers between Marvel and DC, there was a Marvel villain in addition to the DC villain-- in this case, Dark Phoenix.

Darkseid's latest attempt to attack Earth was through the kidnapping of Supergirl. He had hoped that he was able to use Black Kryptonite to brainwash Supergirl, thus, providing him with a leader for his Female Furies, as well as a warrior on par with Superman. However, this plan backfired as Batman and Superman were able to save Supergirl. This set forward a plan of revenge by Darkseid to destroy Supergirl. This also fails as Supergirl is teleported out at the last minute. This sets Superman into a unparalleled fit of rage as he hurls Darkseid into the sun where they attempted to destroy each other. Superman beats him unconscious enough to throw him into the Source Wall. There, Superman declared that, �For years and years you�ve tried to learn the secrets of Ultimate power from the other side. But you will never get the answers�just like the others who are entombed here. This is where you belong. Along with all the other failures in the universe.� The mysterious appearance of the Maximums has been linked to Darkseid. To pay a debt incurred to an alternate reality Darkseid in order to realign the timeline, Superman recently freed Darkseid from his entombment.