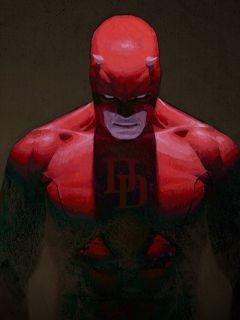 Daredevil's sense of touch is so acute that his finger can feel the faint impressions of ink on a printed page, allowing him to read by touch. The rest of his skin is equally sensitive, enabling him by concentration to feel minute temperature and pressure changes in the atmosphere around him. Even with his senses of smell and hearing blocked, he can feel the presence of a person standing five feet away from him simply by his or her body heat and disturbance of air. A side effect of his sense of touch is Daredevil's ability to manipulate his muscles and internal organs. The sense of touch is not just external, but internal too (central nervous system), thereby giving him the ability to have total body control, increasing his strength and reflexes to near peak human levels and increasing his agility to enhanced human levels.

Daredevil's sense of smell is so acute that he can distinguish between identical twins at twenty feet by minute differences in smell. He can detect odors of an atmospheric concentration of thirty parts per million. Further, his ability to remember smells enables him to identify any person he has spent at least five minutes with by smell alone, no matter how he or she might try to camouflage his or her natural odor. His powers of concentration are such that he can focus upon a single person's smell and follow it through a crowd of people at a distance of fifty feet.

Daredevil's sense of hearing enables him to detect an acoustic pressure change of one decibel at a pressure level of seven decibels (whereas the lowest threshold for average human hearing is twenty decibels.) He can hear a person's heartbeat at a distance of over twenty feet, or people whispering on the other side of a standard soundproofed wall. Through practice, Daredevil is able to control his hearing acuity, mentally blocking out specific sounds like his own breathing and heartbeat, all ambient sounds to a normal human level of perception, or all sounds but a particular sound he is concentrating upon.

Daredevil can tell whether a person is lying by listening to changes in his or her heartbeat (though he can be fooled by a pacemaker or those able to control their own heartbeat.)

Daredevil can identify people by the specific patterns of their heartbeats.

Superhuman Sense of Taste: Daredevil's sense of taste enables him to detect the number of grains of salt on a pretzel. His ability to remember tastes enables him to determine every ingredient of a food or drink he tastes, as long as there are at least twenty milligrams of that substance present.

It is a common misconception that balance isn't a sense, but Daredevil's balance centers give him equilibrium on par with Spider-Man.

Daredevil can also sense the proximity and arrangement of objects about himself. According to one theory, Daredevil's "radar sense" functions via his brain's generation of energy within a certain portion of the electromagnetic spectrum. The signal emanates from sending regions of his brain, after which it travels outward, bounces off objects around him, and returns to receiving regions of his brain. Another theory is that this sense functions more closely to sonar in which Daredevil hears the faint echoes of sounds as they bounce off nearby objects. His sense may operate by a combination of these techniques or by other, unknown means. In any event, via this ability, Daredevil synthesizes a very close analogue of three-dimensional human sight. After he lost the Radar, Matt's instructor Stick retaught him his Radar/Senses through special training. Stick told Matt the radiation gave him a "free ride" but now he must develop it like everyone else. Its resolution is not very fine, probably on the order of several feet at a distance of one hundred feet. By repositioning his head and adding input from his other senses, Daredevil is able to resolve the image of an average flagpole (three-inch cylinder) at a distance of over eighty feet.

Due to Stick's training Daredevil has displayed minor telepathic abilities.

Matt has a high IQ; he's an accomplished strategist as well as an expert in interrogation, disguise, medicine, science and detective work.

Daredevil has shown to be an expert detective using his intellect to figure out complex problems and hyper-senses to find clues and evidence to crime scenes.

With the aide of his hyper-senses Matt is able to track objects and people from miles away with ease.

Matt uses many different interrogation methods to extract information from criminals. His knowledge of criminology and torture is unerring and often overwhelming.

He is a skilled lawyer, specializing in criminal justice.

Daredevil is classed superb-Olympic athlete, gymnast, acrobat, and aerialist due to constant training and exercise. His reflexes and agility are equally remarkable and are on par with the finest human athletes.

Thanks to his martial arts training, Matt is proficient in wielding various different weapons. Since Ninjutsu is the only identified discipline that teaches weapons, it would indicate he is trained in the use of most Japanese-themed melee weaponry.

He is very accurate in throwing most projectile-like weaponry along with his sticks.

Matt is an expert in wielding all types of stick weapons which include staffs, batons, nunchaku, and paired short sticks.

Daredevil has also been trained in the ninja arts by Stick, a master and member of the secret order The Chaste. Nick Fury, former director of S.H.I.E.L.D, commented that there are only a handful of individuals that know what Matt Murdock knows, referring to the Chaste. Stick helped Daredevil control his powers and taught him valuable fighting techniques with stealth, vanishing, to even life-energy(chi/ki)control. Matt is well educated in the functioning of the human body as well as martial arts techniques that target pressure points enabling him to paralyze limbs of an individual's body or the entire body altogether. He's disabled eye sight, speech, induced pain, and even has knowledge of pressure points inducing death. Daredevil's fighting style blends Boxing with Ninjutsu, Judo and Aikijujutsu, but he may have been exposed to additional disciplines to varying degrees by Stick to compliment Matt's strengths as he has been seen employing other sophistocated techniques such as jumping and ground-level kicks and jumping takedowns. His skills have proven sufficient to enable him to defeat or stalemate some of the greatest fighters on Earth. He has fought opponents such as the Black Panther, Taskmaster, Sabretooth, and Wolverine to standstills, even impaling Wolverine with a sword while the mutant was in a feral state due to brainwashing by the terrorists known as Hydra.