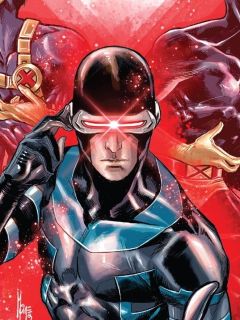 Cyclops possesses the mutant ability to project a powerful beam of concussive, ruby-colored force from his eyes. Cyclops's powers were originally believed to be ambient energies (such as solar radiation, photons, and cosmic rays) absorbed and metabolized by his body into concussive blasts that are released from his eyes. However, the energy supply of his optic blasts are later revealed to originate from a non-Einsteinian universe that opens up whenever he uses his optic blasts.

Cyclops's eyes not only are organs that utilizes the the visible spectrum of light to see the world around it. They are are also inter-dimensional portals between this universe and a non-Einsteinian universe where physical laws as we know them do not pertain. This non-Einsteinian universe is filled with particles that resemble photons, yet they interact with this universe's particles by transferring kinetic energy in the form of gravitons (the particle of gravitation). These particles generate great, directional concussive force when they interact with the objects of this universe.

Cyclops's mind has a particular psionic field that is attuned to the forces that maintain the apertures that have taken the place of his eyes. Because his mind's psionic field envelops his body, it automatically shunts the other-dimensional particles back into their point of origin when they collide with his body. Thus, his body is protected from the effects of the particles, and even the thin membrane of his eyelids is sufficient to block the emission of energy. The synthetic ruby quartz crystal used to fashion the lenses of Cyclops's eyeglasses and visor is resonant to his minds' psionic field and is similarly protected.

The extra dimensional supply of energy for Cyclops's eye-blast is practically infinite. Thus, so long as Cyclops's psionic field is active (which is constant), there is the potential to emit energy. The only limit to the eye-blast is the mental fatigue of focusing constantly. After about 15 minute of constant usage, the psionic field subsides and allows only a slight leakage of energy to pass through the aperture. Cyclops's metabolism will recover sufficiently for him to continue in about an additional 15 minutes.

The maximum force of Cyclops' optic blasts are unknown, but a commonly given description is that he can "punch holes through mountains", and he has been shown to rupture a half-inch thick carbon steel plate. During a particular battle, Scott says that he hit Cain Marko (a.k.a. the Juggernaut) with enough power to split a small planet in half, though he may have been indulging in hyperbole. In the Age of Apocalypse dimension, his beams can cut through Adamantium, a previously indestructible metal. In the mainstream continuity of the Marvel Universe, it has also been implied that Cyclops only utilizes a fraction of the energies at his disposal. During the Civil War: X-Men story arc, Cyclops is controlled by another mutant to use his powers at their full magnitude. When directed at the energy-absorbing mutant Bishop, Cyclops was able to overload Bishop's powers in a matter of seconds. When Iron Man measured Cyclops's power while he was powering Bishop, he found the energy output was well over 2 gigawatts, larger than a large nuclear reactor. It is also stated that Cyclops does not use his powers at such a level due to the preoccupation he has regarding his control (or lack thereof) of his abilities.

Cyclops is seen fighting The Hulk in World War Hulk: X-Men #1 and in issue #2, where he uses a beam blast to stop the Hulk, refusing to let the Hulk take Professor Xavier. While it peels off some of the Hulk's skin, he was able to walk towards Cyclops and clench his entire face, effectively containing the blast.

Cyclops possesses an uncanny sense of trigonometry, in this sense used to describe his observation of objects around himself and the angles found between surfaces of these objects. Cyclops has repeatedly demonstrated the ability to cause his optic blasts to ricochet and/or reflect off those objects in a trajectory to his liking. This is commonly called a "banked shot" when applied to this talent. Cyclops has been observed causing beams to reflect from over a dozen surfaces in the course of one blast, and still hit his intended target accurately. It is his sense of superhumanly enhanced spatial awareness that allows him to perform these feats as well.

Cyclops is resistant to the effects of his own powers. This is linked to him being capable of withstanding his brother's ability with no ill effects. This is a result of their close genetics, a quirk of mutant genetics that is common among siblings.

Cyclops is an expert pilot of fixed-wing aircraft, a skill he appears to have inherited from his father. It has also been implied that his trigonometric sense improves his abilities in the air.

Cyclops has spent most of his superhero career as the leader of either the X-Men or X-Factor and has developed exceptional leadership skills. It is notable that regardless of their general attitude towards him, all of the X-Men tend to obey his orders in battle - because they know that he's usually right.

Cyclops also has extensive training in martial arts and unarmed combat, holding black belts in judo and aikido. His level of skill is sufficient to defeat six normal men with his eyes closed, and he has in the past held his own against such dangerous enemies as Wolverine and Ghost Rider.