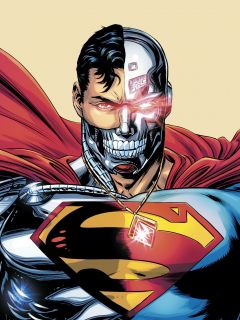 Since he is, at the core, an energy being, Henshaw is extremely difficult to permanently destroy, as he can transfer his electronic consciousness into any nearby machine. The maximum distance range of this transfer is unknown, although Henshaw was able to somehow transmit his mind from the 'Cyborg Superman' body on Earth to the tracking device attached to Doomsday, following Reign of the Supermen.

Cyborg Superman is also immortal, being able to live no matter what happens to his physical body.

He can posses machines and anything even remotely mechanical and is able to control them completely with an ability he calls "technomorphing". Unlike most technopaths, he doesn't just command them, he incorporates them into himself and nearby technology becomes an extension of himself. He can take any machine and, once it's a part of him, he can transform it into anything his mind can imagine, and thanks to time spent traveling across many universes, he can imagine a lot. Among other abilities, Henshaw can animate machines, construct any technological device, control any mechanical system (during Reign of the Superman, the Cyborg briefly 'possessed' Steel's armor) and change the shape of the mechanical components of his 'bodies' (most frequently changing one or both of his hands into various energy weapons).

Thanks to his interactions with Superman's birthing matrix, the Cyborg possesses knowledge of both Superman's Kryptonian genetic code and Kryptonian technology. This information allows the Henshaw to construct bodies with organic portions that are genetically identical to Superman and mechanical components built from Kryptonian alloys. Using Superman's genetic code gives the Cyborg access to all of Superman's powers, including super strength, speed, invulnerability and senses.

In addition, Henshaw's 'Cyborg' body has a number of other mechanical sensors, can interface with any machine and the technological components can transform into a myriad of weapons and tools; since his first appearance as the Cyborg Superman, Henshaw has consistently used some version of that body. The Cyborg has been depicted in some instances using a heat beam only from his mechanical eye and in other instances using beams from both eyes.

Henshaw's cellular structure is more dense, resilient and biologically more effective than human tissue. Strangely enough, he does not seem to possess superhuman strength levels despite his enhanced cellular ability. Without constant exposure to solar energy, his strength seems on par for a human of his height and weight who engages in regular physical activity. He does possess several organs whose functions are not yet disclosed or understood but are believed to be part of and perhaps even the source of his biomatrix force field and reclamation aura. Superman has manifested a wide range of metahuman abilities and is considered to be the most powerful metahuman alive. Henshaw's body also stores energy actively within his bio-cellular matrix as an energy pattern that is linked to his body's electromagnetic field. This energy powers most of Henshaw's electromagnetic capabilities such as flight and heat vision. It also supplements his physical strength by a factor of 12,000 times or so.

Technically, this is the main source of Henshaw's powers. Because Henshaw's powers are greatly due to exposure to Earth's yellow sun, his powers have been affected by extreme absorptions of solar power, whether voluntary or involuntary.

While the exact magnitude of Henshaw's strength is unknown, it is generally accepted that his strength easily surpasses the capacity to lift 100 tons, but how much more is not known exactly.

Henshaw's body is nigh-invulnerable (Has survived high yield nuclear explosions). Henshaw's invulnerability also may not be equal to Superman, as he was shown melting and burning up in Earth's sun during a battle with Superman Red, an exposure which the true Superman has survived repeatedly with no ill effects. However, Henshaw's 'Cyborg' body was able to withstand one attack from Darkseid's Omega Beams, although the assault did cause some damage.

Ability to maintain continuous strenuous physical action for an undefined period. Theoretically, Henshaw has unlimited stamina, nourishment coming from the solar energy his cells process; he does, however, have the psychological need to eat and drink just as humans do, though he receives the majority of his nourishment from the Sun.

Which allows him to maneuver precisely in any direction, as well as hover. The mechanism by which he flies is unknown, but some suggestions have been a field of energy allowing unconscious manipulation of gravity or diffraction/reflection of gravity due to unidentified Kryptonian organs affected by a yellow sun, or psionic manipulation of a personal anti-gravitational aura, which is also caused by his Kryptonian cells and a yellow sun. Superman has been able to fly to the moon in under two minutes.

The ability to move at an incredible speed, like the Flash. This includes running, but flying is less strenuous and more versatile. His top speed seems to be just under the speed of light. Recently, it has been established that he is not as fast as the current incarnation of the Flash, Wally West, who can exceed the speed of light and can time travel under his own power. Henshaw also possesses superhuman reflexes and the ability to move at incredible speeds by sheer force of will. He can also perform complex actions like assembling objects at hundreds of times faster than a normal human.

The ability to "zoom in" his distance to see something at a great distance, without violating the laws of physics. The total telescopic ability is unprecedented, but limited to some extent.

The ability to see through anything except lead. He can see things behind a wall as if the wall were not there, or can "peel back" layer after layer of matter in his mind. Opponents sometimes used lead-lined constructs in an attempt to hide things from Henshaw. Henshaw is able to focus his vision past layers of matter, literally seeing "through" them -- possibly perceiving x-rays, cosmic rays or other forms of energy invisible to normal human vision which pass through Earth's atmosphere (and solid objects) after emission from stars. Since it is passive, this ability would not generate harmful radiation in the same manner as a focused projection of hard X-rays.

The ability to see extremely small objects and images down to the atomic level (normal optical microscopes can only see objects down to the size of chromosomes).

Infrared Vision (he can see in total darkness)

can see well into most of the EM Spectrum. He can see and identify radio/television and any and all broadcast/transmitted frequencies, allowing him to avoid detection through radar or satellite monitoring methods.

The ability to fire beams of intense heat at a target by looking at it with the conscious act of activating this power. Visually, the power is typically depicted as two beams of red light firing from his eyes. These beams can be made invisible, allowing Superman to work undetected. The maximum temperature of his heat vision is said to be around that of a nuclear detonation. The area of effect can be consciously determined by Superman, down to the microscopic level.

The ability to hear any sound at any volume or pitch. The only Earth creature who can detect sounds at the frequency he can is a blue whale (0.01-200,000 Hz). He has shown enough control to block out ambient sounds to focus on a specific source/frequency. Henshaw was able to detect disturbances in the frequency the human brain operates.

Henshaw has shown enhanced intelligence and computational abilities; his mind works sharply and with extreme speed. His analytical powers are impressive — he is able to use his senses to read information directly from machines (and, with careful usage of his heat vision, he can even reprogram machines).