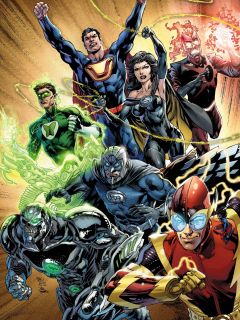 The Outsider was sent to Prime Earth as an emissary, preceding the entire Syndicate. He was responsible for creating the Secret Society of Super-Villains to make way for his masters. Using Pandora's Box, the Outsider opened a portal and lets the Crime Syndicate through. Sea King didn't survive the journey, and they carried an unknown prisoner with them. They declared that this Earth belonged to them.

Sending out a call to the Secret Society and to the world, they began shutting off electronic communications and restarting them under their control. However, their seeming power was hampered by the weakness of their own pride, and they were eventually defeated by the Injustice League. In the end, almost every member of the team died, Owlman got free to lead his criminal empire, and Ultraman and Superwoman were jailed by A.R.G.U.S.

The team was resurrected sometime after the Darkseid War. After the appearance of the Doom Symbol in the sky, they came to know about Perpetua and tried to gain her notice by trying to start a mass-slaughter on their planet. Their plan was successful as Lex Luthor arrived to their homeworld and took them for an audience with her. She agreed to let the CSA serve her, assigning them the duty of leading the humans of Earth 3, who she had turned into Apex Predators. Johnny Quick was vaporized by Perpetua for trying to oppose the idea of the CSA working with her, since he saw her as a great evil threat. When they left, Lex remarked he had watched many of them die and even their homeworld was destroyed, yet they were now alive before him. She in turn stated that the multiverse heals itself and sets back things into the order it thinks is correct.

The Crime Syndicate members however didn't retain memory of their deaths. After Perpetua finished taking over the Multiverse, Earth 0's John Stewart, Superman of Earth 23 and Wonder Woman of Earth 6 struck Earth 3 to destroy the tuning fork powering her with Anti-Crisis Energy. Owlman defeated John Stewart, but didn't kill him since he was seething at the Batman Who Laughs and the other evil Batmen taking over Earth 0, as he believed he was supposed to be the most twisted Batman, and was hesitant about Perpetua remaking the Multiverse. After learning from him that iterations of him had existed and died across realities in past, he decided to betray his team, believing he'll be reborn if he died anyway. As they were fighting their enemies, Owlman used the gun he created at Qward to kill both Ultraman and Superwoman, before blowing up the tuning fork along with himself.