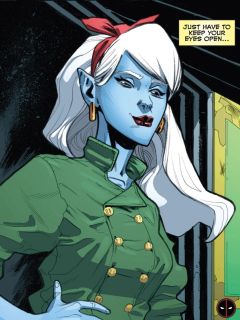 Young mutant shape-shifter Vanessa Carlysle fell deep into a life of prostitution in Boston, Massachusetts where she met and fell in love with mercenary Deadpool (Wade Wilson), before Wilson's later involvement with Weapon X and the subsequent insanity. Vanessa Carlysle was soon saved from Wilson's vengeful employers by Zoe Culloden, a time-traveling agent of Landau, Luckman & Lake who had journeyed into the past to prevent Wilson's eventual self-destruction that lead to him becoming Deadpool. That night, Wilson broke up with Vanessa after learning he had cancer, leaving her heartbroken. Vanessa became a mercenary herself, eventually employed by arms dealer Tolliver, who had her impersonate the mercenary Domino so as to spy on Cable, even joining Cable's new X-Force strike team. As she later explained to the real Domino, the other members were unable to detect a difference because she was able to exactly duplicate Domino's appearance, personality, fingerprints, even DNA. Tolliver ultimately ordered Copycat to bomb X-Force's headquarters, but she had come to care for her teammates, and she stalled until Tolliver dispatched the masked mercenary Deadpool to force her hand. Confronted by X-Force over her betrayal, but still posing as Domino, Copycat helped them fight Tolliver. While Cable discovered the true Domino still alive as Tolliver's prisoner, Copycat was felled by Deadpool, though she managed to escape.

Copycat went into hiding, but was first found by Deadpool, and then Domino. Copycat delayed Domino's intended retribution by helping her locate X-Force, after which she escaped again. Copycat then became involved in the hunt for Tolliver's will, during which she was wounded by Slayback. Her injuries would have proved fatal, but she survived by copying Deadpool's healing factor. Later, Copycat sought to live a peaceful life in San Francisco, California with Garrison Kane, but she soon encountered Deadpool again, an encounter which would have proven fatal had Wolverine not interfered in a timely manner. She was subsequently captured and taken to the Microverse by the emotion-manipulating Psycho-Man, who sought Kane's advanced technology. She was rescued from by Kane, Cable, Domino, and the Microverse's resident heroes, the Microns. Returning to Earth, Copycat finally made peace with Domino.

Seeking revenge on Deadpool, Taskmaster and the Wizard hired Copycat to impersonate the super-strong Titania and gain Deadpool's trust, though he later confessed he had seen through her disguise. Copycat went on to join the subversive Weapon X Project alongside Kane, and was sent to recruit Deadpool into the program. However, her power enhancement by Weapon X began to affect her memory, and she lost track of her mission. Instead, she began seducing Deadpool, but ultimately ended their relationship over his infatuation with Siryn. She would often take the form of other women to surprise him. Deadpool was subsequently recruited by the Weapon X Project to eliminate Copycat, but he refused and tried to warn her. Weapon X then sent Kane to kill both Copycat and Deadpool. Deadpool fought Kane on his own, but Copycat was mortally wounded at the Bronx Zoo in New York City by another Weapon X agent, Sabretooth. She seemingly died in Deadpool's arms.

Revealed to be Alive

However, Deadpool had poured an amount of his blood in Copycat's wounds, which unknown to him healed her. Vanessa then took up the identity of an owner of a chimichanga stand, and later cheated Deadpool out of one of his past marriages.