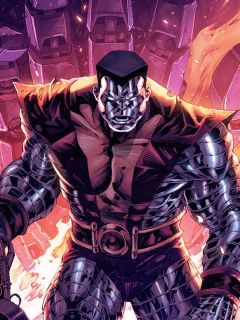 Growing up on his parents' farm, Piotr Rasputin saw his older brother Mikhail become a Cosmonaut. Mikhail was later discovered to be a latent mutant with energy warping powers, and to keep him secret the government faked his death. In later years, Piotr learned that he too was a mutant, and could transform his flesh into steel, but he was content to use his powers to help his fellow farmers. When a transformed Piotr rescued his sister Illyana from a runaway tractor, he was approached by Professor Charles Xavier, who was recruiting mutants for a new team of X-Men to help save his original students from the sentient island Krakoa. Dubbed Colossus by Xavier, Piotr reluctantly joined this new team, which freed the original X-Men and helped defeat Krakoa. After the battle, Piotr remained with the X-Men in America, though he found it difficult to adjust to living in a different culture.

When the X-Men visited the prehistoric Savage Land in Antarctica, Colossus saved some native women from a dinosaur. In return, the two surviving women, Nereel and Shakani, bade him join in a ritual to honor their fallen friend. Said ritual involved the creation of a new life, and though Piotr was initially reluctant, the two women persisted until he surrendered himself to their affections. Later, the X-Men were captured by the assassin Arcade, who brainwashed Colossus into believing he was the Proletarian, workers' hero of communist Russia, and turned him against his teammates. Colossus overcame this conditioning, and the X-Men soon faced the reality-manipulating mutant Proteus, who proved to be vulnerable to metal. Seizing upon this weakness, Colossus plunged his metal fists into the heart of Proteus' energy form, seemingly destroying him and taking Colossus' innocence along with him. Soon after, the X-Men recruited young mutant Kitty Pryde. Despite their initial shyness, a romance blossomed between her and Colossus. Later, Arcade's assistant Miss Locke kidnapped the X-Men's loved ones, including Illyana, to coerce the team into rescuing Arcade from the despotic Doctor Doom. The X-Men rescued them, and Illyana remained with her brother at Xavier's mansion. Eventually, Illyana was trapped in the demon-filled realm Limbo by its then-master, Belasco. She remained his captive for many years, though only moments had elapsed on Earth, and returned as the adolescent sorceress Magik.

Colossus and Kitty grew closer, finally admitting their feelings for one another. Colossus was among the X-Men forced by the godlike Beyonder to fight on his Battleworld. There, he fell in love with the healer Zsaji. After Colossus was killed by a cosmic-powered Doom, Zsaji gave her life to resurrect him. A heartbroken Colossus returned to Earth, ending his relationship with Kitty, though they remained friends. Colossus was later forced to take another life when the Marauders attacked the subterranean Morlocks. To save his teammate Nightcrawler, Colossus killed the Marauder Riptide; however, Riptide's attacks caused Colossus' bio-energy to leak from his metallic form like blood from a flesh wound. The X-Men's then-ally Magneto attempted to heal Colossus with his magnetic powers, but was only able to close the wounds, trapping Colossus in his metal state. Recuperating on Muir Isle, Colossus later rejoined the X-Men in opposing the mystic Adversary in Dallas. When the X-Men returned to the Savage Land after it had been razed by the giant alien Terminus, Colossus was reunited with Nereel. He met her son, Peter, unaware that the boy was the result of his earlier union with Nereel.

After a failed demonic invasion of New York, Illyana regressed in age. Colossus believed she would be safer away from the X-Men and sent her home to Russia while he returned to Australia with the team. Weary of seemingly endless battles, the X-Men entered the Siege Perilous, a mystic gateway that judged all who entered it and sent them to new lives. Colossus emerged virtually amnesiac, establishing a new identity as Peter Nicholas, a building superintendent who became a renowned artist. While in this identity, he would encounter the Morlock ex-leader Callisto, whose appearance was altered into that of a beautiful woman by the skin-controlling Morlock, Masque. His idyllic existence ended when he was possessed by the psychic Shadow King and sent to kill Xavier. He was freed when Xavier erased the Peter Nicholas persona, restoring Colossus' true self, and he rejoined the X-Men. Soon after, the X-Men were pulled into a dimensional void where Colossus was reunited with Mikhail. The X-Men returned to Earth, bringing Mikhail with them; however, Mikhail's sanity had suffered due to his long years of isolation and he snapped, leading the Morlocks in an apparent mass suicide. Unknown to Colossus, Mikhail had actually teleported the Morlocks to an alternate dimension known as "the Hill."

Meanwhile, the Russian government invaded the Rasputin home, killing Colossus' parents and capturing Illyana, whom they sought to genetically accelerate to combat the threat of the mutant Soul Skinner. She was soon rescued by Colossus and came to live with him in America. Eventually, Illyana fell victim to the mutant-killing Legacy Virus, and a disillusioned Colossus abandoned Xavier's dream, joining Magneto's disciples, the Acolytes. Peter would care for the mindwiped Magneto after Professor X avenged Wolverine's injuries at the master of magnetism's hands. After the destruction of Magneto's orbital base Avalon, at the hands of Holocaust, a mutant from a reality where Apocalypse was master of most of the world, Colossus would be reunited with Callisto, who he had feelings from while suffering from amnesia under the influence of the Seige Perilous. Later on, Piotr searched for Kitty, then a member of the British super-team Excalibur. When he found Kitty kissing her then-boyfriend Pete Wisdom, Colossus nearly beat Wisdom to death in a jealous rage. Excalibur took responsibility for Colossus, and he came to accept his role with the team, serving as a valued member until they disbanded, after which Colossus rejoined the X-Men. When Xavier temporarily disbanded the X-Men in an effort to flush out an alien imposter, Colossus and his teammate Marrow set off on vacation, but were instead teleported to the Hill. There, Colossus freed Mikhail from the corrupting influence of a sentient energy being and took him back to Earth. Soon after, during a clash between the X-Men and the forces of Apocalypse, Mikhail used his powers to teleport Apocalypse's Horsemen to parts unknown.

Following the death of renowned geneticist Moira MacTaggart, the X-Men's resident scientist the Beast used her work to create a cure for the Legacy Virus; however, it could not be activated without emulating the manner in which the plague had first been discharged: through the death of an infected mutant. Having stood by, powerless, as his sister succumbed to the virus, Colossus injected himself with the formula. The serum caused his powers to flare, spreading the cure into Earth's atmosphere, claiming his life in the process. Colossus' body was supposedly cremated, and Kitty scattered the ashes over his Russian farmland home; however, his body had secretly been stolen by Ord, an alien who had learned that an Earthly mutant would be responsible for destroying his world. Ord had come to Earth to declare war, but the spy agency S.W.O.R.D., a sub-division of S.H.I.E.L.D. handling extraterrestrial matters, was able to settle diplomatically with him. Ord had Colossus restored to life and imprisoned him for years while experimenting on him. Ultimately, Ord discovered the Legacy Virus cure still in Colossus' system and presented his findings to Benetech geneticist Doctor Kavita Rao, who modified it to create a "cure" for the "mutant condition." Learning of the cure, the X-Men went to Benetech to investigate. There, Kitty found Colossus alive and, after overcoming her initial shock, took him to aid the X-Men against Ord. Defeated, Ord was taken into custody, and Colossus returned home with the X-Men to adjust to his new lease on life.

Soon after, Colossus became involved in a mystery involving the deaths of several of his cousins, all of whom (like himself) were descended from the �doom of Old Russia�, Grigori Rasputin. It was eventually revealed that Grigori was attempting to return through his descendants, and that his old ally Mister Sinister had teamed with Colossus' brother Mikhail to hasten the process. Ultimately, Mikhail sought to protect Colossus by exiling himself to ensure Grigori could never return.