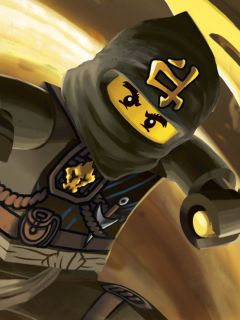 As a child, Cole's father sent him to the Marty Oppenheimer School of Performing Arts hoping that he would follow in his footsteps and become a dancer. Unwilling to do so but reluctant to displease his father, Cole secretly ran away from the school, occasionally writing to his father to claim that he was still following the dancer's path.

Cole began drifting from place to place, always seeking new challenges to test his strength and skill. Soon after his mother died, he attempted to climb the tallest mountain in Ninjago. Upon reaching the top, he found Master Wu sitting there, drinking tea. After telling Wu about his anger towards his father for ignoring him and ignoring the loss of his mother, he is told by Wu that grief is dealt with in many forms, sometimes with singing and dancing, and sometimes by climbing mountains. Cole proceeded to ask Wu why he climbed the mountain, after which he learned that Wu was there to meet him. Learning that he had great potential, he followed the old master to the Monastery of Spinjitzu and began training to become a Ninja.