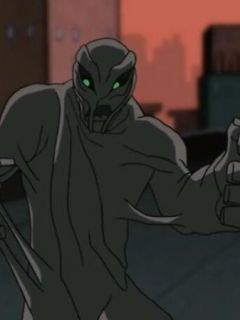 When The Joker tortured him, he forced him to breathe the gaseous remains of the substance Joker Putty that later caused him to turn into Clayface. As Clayface, he wanted to enact revenge on those who had wronged him, starting with Chief Rojas. Despite the combined efforts of Yin and Batman, Ethan showed no remorse or desire to return to his human form and opted to kill his former boss. Through Yin's final pleas, Clayface abandoned his quest for vengeance, then slipped into the sewers. It was this event that caused Ellen Yin to see Batman as a hero, not just some costumed vigilante.

Sometime later, Clayface decided to kill the Joker in a bid of rage, an accomplishment to which he almost succeeded when he disguised himself as an Arkham Asylum caretaker. However, Batman, disguised as an inspector, saved the Joker. He then froze Clayface, though he left an opportunity for the Joker to escape in the inspector disguise. After spending several months in Arkham, Ethan was showing signs of rehabilitation, provided he didn't use his powers as Clayface and remained human. Bruce personally vouched for Ethan at his trial and offered a job at Wayne Enterprises. Despite the gesture, not everyone was as polite or forgiving as Bruce Wayne. Several people, including Ethan's new coworkers constantly saw him as Clayface, not Ethan Bennett. When Joker arrived at Wayne Industries to steal from the vaults, Ethan used his powers to stop said villain. However The Joker's words spoke to Ethan, plus combine with the temptation, Ethan decided to become the criminal Clayface full time. Reluctantly, Batman tossed an ice capsule at his friend, stopping Clayface once again.

The next Halloween, Clayface resurfaced as one of Gotham's most famous urban legends: The Swamp Zombie, Solomon Grundy. According to a local legend, 150 years ago, the founders of Gotham City dumped their construction waste into the lake, polluting it and turning it into the swamp it became known as. Seek revenge, the construction workers used black magic, combined with the rare lunar eclipse of Halloween night, to create the Swamp Zombie that would leave the founders destitute. But Grundy's rage wouldn't stop there, and the legend states that he would return to haunt the descendants of the founders and bring about their ancestor's fate. Using this as a cover, Clayface disguised himself as Grundy and attack the founders, intent on taking their money. As pointed out by Batman, no one would think to look for the look in the swamp, and with everyone looking for Grundy, Clayface would walk away with a fortune. Batman tracked his former friend to the final founding descendant, the owner of the Gotham Wax Museum. The two battled once again, ending with Batman dumping hot wax and encasing Clayface.

Ethan's final appearance had him capturing the Joker in a dog food factory, where he willingly turned himself in. Finally ready to pay for his crimes, a cure was fashioned by siphoning off a sample of the Clayface gene. This sample, however, is stolen by has-been actor, Basil Karlo, who uses it to become an even more powerful Clayface. Ethan uses his powers one last time to stop Karlo, ending with Batman using the cure on the two of them. While the cure finally worked on Ethan, Basil remained Clayface.

In "Artifacts", it is hinted that Ethan becomes the new Chief of Police of Gotham City Police Department in the year 2027.
Superhero Class