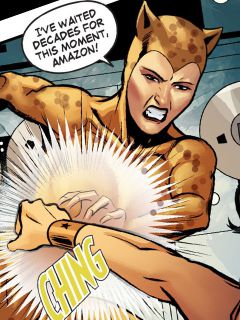 Priscilla Rich was born a debutante some time in the early 1920s. By the time she reached adulthood, Priscilla's life of privilege bred a wealth of insecurity and low self esteem. At some point, Priscilla suffered a psychotic break, and a dual personality developed. Unlike her more reserved self, this second personality was strong and violent. It poisoned Priscilla's mind, eventually turning her into a twisted, malevolent being.

In the Autumn of 1943, Priscilla volunteered as an assistant for the Junior League Committee in Washington, D.C. Working alongside committee chairman Courtley Darling, Rich attended a benefit function to raise funds for women and children suffering in the war overseas. The special guest of honor for the function was the Amazon heroine Wonder Woman. The auditorium guests showered praise upon Wonder Woman, completely ignoring Priscilla's presence altogether. This blow to her ego proved too much for the jealous Priscilla and her dark persona began to show through. One of the performances involved Wonder Woman using her super-powers to escape from being shackled and immersed inside of a sealed tank of water. While the other assistants bound Wonder Woman in chains, Priscilla stole her magic lasso, and secretly tied Wonder Woman's arms and legs, knowing that she could never break the invulnerable lariat. Her hope was that the Amazon would drown during the performance, and Priscilla would gain revenge for being upstaged. Wonder Woman's resourcefulness enabled her to escape however, though she was not exactly sure who was responsible for tying her up with her own lasso.

That night, Priscilla suffered yet another blow to her already bruised ego. She made plans with Courtley Darling for a dinner date, but Courtley broke the date in favor of going to a club with Wonder Woman. This was the final straw for Priscilla's sanity. She returned home and stared into her bedroom mirror. The reflection that stared back at her was a woman dressed in the costume of a cheetah. Priscilla’s second persona urged her to take her cheetah skin rug and fashion a costume from it. She would then become a strong warrior huntress and take revenge against those who wronged her. Priscilla did as instructed, allowing her evil persona to take full control of her. Thus, the Cheetah was born.

Later that evening, the Cheetah broke into Darling's theater office and stole the charity funds from the safe. She then tracked Wonder Woman back to her residence at Diana Prince's apartment. She snuck through the bedroom window while Wonder Woman slept, prepared to drive a dagger into the heroine's chest. She stopped short however, citing that "death is too good for her". Instead, she planted the stolen money beneath Wonder Woman's bed.

The Cheetah survived however and fled to the Pacific where she began a female slave ring. All of the Cheetah's slaves were forced to wear cat-like costumes similar to her own. She sent one of her slaves back to the United States where, under the guise of a blind mind reader, she baited Wonder Woman into a trap in the hopes that Wonder Woman might reveal state secrets to her undercover agent. Wonder Woman discovered the ruse however, and learned that the Cheetah was still alive.

Soon after, the Cheetah took on the alias of Kay Carlton and infiltrated a group of Olympic competitors that had once belonged to Baroness Paula von Gunther's slave ring. As Carlton, she cheated in a series of Olympic games held on Paradise Island defeating many of her Amazon rivals. After the competition, the Cheetah stole Hippolyta's Golden Girdle, taking the Amazon queen captive. She then used the power of the girdle to bolster her own ability to combat Wonder Woman. Wonder Woman defeated the Cheetah and returned the girdle to Hippolyta. She decided to take Cheetah to nearby Reform Island in the hopes of curing her insanity. The process failed however, and the Cheetah soon returned to a life of crime.