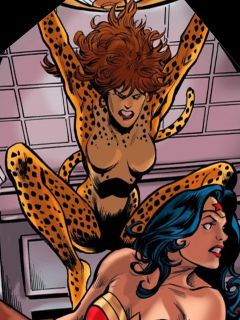 Deborah Domaine was a woman born of wealth and privilege. Growing up in the Chesapeake Bay area, she became very close with her eccentric aunt, an heiress named Priscilla Rich. Even as Debbi grew into adulthood however, she never knew her aunt's most closely guarded secret – that she was once the psychotic villain known as the Cheetah.

Several years later, Debbi became a socially active individual, involving herself in various environmentally conscious initiatives such as the Organization for Ecological Sanity (O.E.S.). She quickly rose to prominence within the O.E.S.'s ranks, and even used her private yacht off of Shore Marina as a de facto headquarters for the group. Debbi would sail about the world, tracking down ecological disasters and raising public awareness concerning dangers to the Earth.

On one such occasion, the O.E.S. discovered an oil tanker that had ruptured and set ablaze. The super-hero known as Wonder Woman responded to the emergency and effectively contained the fire, as well as the tons of oil that had spilled out into the bay. Debbi and her crew met the Amazon and she invited her aboard her yacht to clean up. The two would likely have become friends, had fate intervened.

Shortly after the oil tanker incident, Debbi received a letter from her aunt. Priscilla Rich was dying and wanted to see while she still had a small amount of time available to her. Debbi visited Priscilla's mansion, and the aging heiress struggled to reveal her darkest secret. However, Priscilla died before she could say any more. Reeling from shock, Debbi stumbled backwards into Priscilla's boudoir, overturning a mannequin. Upon the mannequin was the costume of the Cheetah. The mannequin struck her upon the brow, rendering her unconscious.

Meanwhile, the terrorist leader known as Kobra had been looking to acquire fresh new recruits. He sent one of his agents to Chesapeake Bay to enlist the services of the Cheetah. Upon discovering that the Cheetah was dead, the agent instead abducted the unconscious Deborah Domaine.

When Debbi awoke, she found herself a prisoner of Kobra. As he was unable to make use of the original Cheetah, he decided to craft one of his own. He placed Debbi inside of a monitor station, suspended from the ceiling by electric cables. Using a brainwashing technique involving holographic projections, Kobra exposed her to a barrage of violent images of ecological disasters. With every flickering image she was forced to witness, an electric charge was sent coursing through her body. Within a short period of time, the process drove Debbi Domaine irrevocably insane. Kobra outfitted her with a feline costume similar in design to that once worn by her aunt. He further implemented her with a set of chrome-steel claws, and thus the new Cheetah was born.

Deborah Domaine's first foray into crime was on behalf of her new master, Kobra. Under his instruction, she infiltrated the security station at Hampstead Dam in Maryland and sabotaged the controls that operated the spill-gates. The dam burst and water from Chesapeake Bay flooded throughout the small town. The disaster earned the attention of the super-hero, Wonder Woman, who arrived just in time to save as many people from the flood waters as possible.

Cheetah surveyed the damage from her speedboat, and found herself crossing swords with Wonder Woman. The two fought one another, and Diana quickly realized that this new Cheetah was actually the environmental activist that she had met only days before. During the struggle, the Cheetah managed to get the upper hand, and stole from Wonder Woman, her magic lasso. She propelled the heroine into the bay and made her escape.

Cheetah and Wonder Woman fought one another again that very same night. Diana had tracked Debbi to her old O.E.S. yacht, where she quickly recovered her magic lasso. The Cheetah leapt upon her from behind, but Wonder Woman was able to keep her at a safe distance. During their struggle, Debbi's yacht had pulled itself free from its mooring and began drifting out into the bay. It fell into the path of an oncoming ferry, which struck the boat causing it to explode. The blast propelled both combatants into the water, and Cheetah used the fiery blaze as cover to make her escape.

Before long, the Cheetah cut ties with Kobra and joined a more prominent terrorist organization known as the Secret Society of Super-Villains. She worked with the team for a brief time until she was ultimately captured and sent to Arkham Asylum in Gotham City.

The Cheetah eventually escaped from Arkham shortly before the catastrophic event known as the Crisis on Infinite Earths. During the Crisis, she aligned herself with Lex Luthor and several other villains in an effort to save their beleaguered planet from the likes of the Anti-Monitor.
Superhero Class