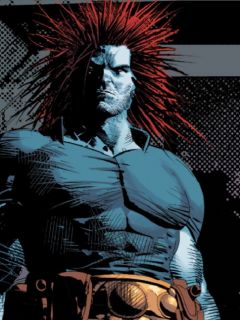 Champion Of The Universe

Champion Of The Universe's History

Like all the Elders of the Universe, the Champion's origin is lost in the early history of the universe. It is known that he is one of the oldest living beings in the universe. Like other Elders, he is the survivor of one of the intelligent races that evolved in one of the first galaxies to form after the “Big Bang”, the cataclysmic event in which the universe was created. Although his race became extinct and even his native galaxy died as the ages passed, the Champion, like the other Elders, lived on, having become virtually immortal. As the relatively few survivors of the earliest period of the universe, the Elders regarded themselves as figuratively being brothers.

The Champion goes from place to place seeking to defeat all he can, challenging them to matches. However, he uses his great power for little more than bullying others around. He has come to rely solely on his physical skills.

Challenging the Champions of Earth

Thanos was able to take the Power Gem from the Champion. Champion later attempted to gain revenge on Thanos but was harmlessly teleported away.

The Champion then joined the other Elders in the Grandmaster's scheme to kill Galactus. The existing universe would collapse, and the Elders would survive the big crunch and the subsequent big bang of a new universe, becoming Galactus-like beings in the new universe. The scheme failed, but the Champion had become one of the threats to the universe he had schemed.

Following the Grandmaster's schemes, the Champion took possession of the Power Gem. He held it for a time until Thanos of Titan came to bargain for it.

Accessing the power of a stolen Cosmic Cube, Thanos summoned a gathering of the astral versions of some cosmic heavyweights, including The Stranger, the In-Betweener and members of the Elders of the Universe. While Thanos briefly taunted them with the powerful item, the Collector coveted it, seeking to broker a trade. Tiring of the general exchange, Thanos turned the Cube on the other entities, seemingly wiping them from existence. They had actually been teleported to the Cancerverse, as the artificial Cosmic Cube wasn't powerful enough to kill them. The Avengers and the Guardians of the Galaxy joined them soon after the Mad Titan tried to kill them as well. The Elders made a deal with the heroes, using a weapon from the Collector's vault, the Avengers weakened Thanos after returning to Earth. The united forces of Earth's heroes proceeded to defeat Thanos, and as part of the deal, the Elders got to decide what to do with him.

The Champion on Skardon battled various heroes with only one rule: no weapons. He, however, was using the Power Gem and defeated Hercules, Beta Ray Bill, Gladiator and Adam Warlock who was disqualified for using the Soul Gem and sent Pip to find others. She-Hulk was brought to the planet to face him. Warlock had been finding contenders for the Champion to battle in the hopes of winning, he mentions a battle in which Champion defeated Drax the Destroyer and Silver Surfer. She-Hulk lost but asked for a rematch in 3 months. She-Hulk underwent extensive training with Gamora. After that time she declared the Power Gem as a weapon, then in a fair fight beats the Champion badly. She is declared the planet's ruler and leaves Warlock and Z9 in charge as she returns home. Angry, he met with her old enemy Titania but she stole the Power Gem after he agreed to train her.

When the Deadpool Corps was chosen to go defeat the Awareness, Champion deemed them unworthy and sought to challenge them. However, he is tricked and left stranded on an empty planet after the Deadpool Corps steals his motorcycle. After being rescued by the Gardener, Champion tracks down Deadpool at a bar and begins to fight, but is eventually convinced to join the team under the name Championpool. He is soon tricked into going to fight on another deserted planet, only to find that there are no warriors to fight and his rocket cycle is without fuel, leaving him stranded.

The Champion took part in a contest of champions between the Elders of the Universe to decide who would keep the Iso-8 that was now abundant after the rebirth of the multiverse, his champions lost and he was eliminated from the contest.

Champion was sent by Thanos' son Thane and Mistress Death to recruit the mad titan's brother Starfox as part of their plan to bring down his father for good as it was found out Thanos was dying.