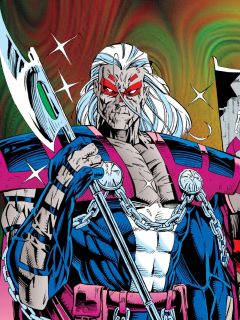 Brought to Earth by the unpredictable hex power of the Scarlet Witch, Century was an amnesiac. After helping Force Works to defeat the extraterrestrial evil called The Scatter, Century was soon inducted onto the team. Century joined Force Works on many adventures and took on all who opposed them such as the Manadrin’s Avatars, and the Black Brigade. As time went on, Century began to regain some of his memories and started to rediscover himself although he could not remember what great purpose he was created for. It wasn’t long, however, that a scoundrel from Century’s past returned to plague him once more. The Broker, a slaver always on the lookout for unique merchandise, once called Century his property and attempted to reclaim him when he traveled to Earth. He ordered his slaves to attack Force Works, but the Broker was eventually defeated by Century, USAgent and PLATO. In the process, Century liberated all of the Broker’s slaves which earned him the nickname Deliverer among the former captives. It was also at that time Century decided to travel back into space, with the Broker as his prisoner, in order to find out more of his past and to return those who the Broker enslaved back to their home worlds. It was only when he left Earth that Century realized he missed Force Works and was in love with the Scarlet Witch.

However, it wasn’t long before things went horribly wrong. Soon after one of the Broker’s Bodyguard Cadre members, Kiwi, was brought back to his home planet, Century was summoned to the bridge of the starship only to be attacked by those he just recently saved. The Broker had used Tyrmean Brain Stem Parasites to once again enslave the crew and even Century as well in order to sell him off to a perspective buyer in need of a dimensional teleporter. The Broker and his slaves took Century to the moon of Memoriam which orbits the long-dead planet of Century’s people, the Hodomur. As they waited planet side for the customer to arrive, the Broker all who were present the reason for Century’s creation. It seems that Century was created to be a tool for vengeance against an evil being called Lore. Lore had visited Century’s home world and laid waste to it, but it was The Scatter who ultimately finished the planet off. Century was to be the Hodomur ultimate warrior, a mixture of 100 of the strongest and most able survivors and was given a 100-year lifespan (how much of it has been spent is unknown to Century) to hunt and finally destroy Lore. It was during that time the Broker found and captured Century and erased his mission of vengeance from his mind so that he would be more subservient. The Broker eventually sold Century to The Scatter so he could track Lore and find all of the injured worlds she left in her wake so that The Scatter could feed off the rest of the planet. Century led The Scatter to many worlds, all of which they destroyed, including the world of Prashard, the home of another of the Broker’s slaves, Skewer. When Skewer heard this, he attacked but was put down by the Broker right before the arrival of Imogen, Century’s new owner.

Teleporting Imogen and her party, a being called Nohm and two Gene-Batch Warclones, to another dimension, Century soon came in contact with a being he recognizes but does not know why.

A woman called Azimuth saved the foreigners from being annihilated by the local inhabitants and transported them to her stronghold. Once there, the true goal of Imogen’s interest in Century was revealed. An ancient artifact of immense power known as The Crucible was shown to the strange visitors, and then Azimuth destroyed the parasite that caused Century to be a slave and gave him back free will. It was at that time Azimuth was going to reveal information about the mysterious Imogen to Century, but was never allowed to do so. Imogen ruthlessly attacked Azimuth, and even though Century rallied to help her, it was too late. Azimuth was left catatonic, and Imogen had possession of The Crucible. Her victory was almost thwarted by the sudden arrival of the Broker who followed her to this strange dimension, so he could possess what Imogen was after and reclaim Century as his own once again. The Broker took three of his slaves with him, including Skewer, into the stronghold but, back on the ship, another slave, Slug, was implementing a plan to stop him. Slug destroyed the control link between Broker and the parasites so that the slaves would be free again even at the cost of his own life. Once the slaves heard the news, they turned on their former master and Skewer drew first blood. The Broker managed to kill two of the others, but it was Century who dealt the final blow when he separated the Broker’s head from his body. In the confusion, Imogen fled with The Crucible and Century never found out what Azimuth was going to tell him. Century and the others left that dimension taking Nohm and one of the Warclones with them. When asked where he wanted to go next, Century claimed he wanted to go back to his home on Earth.

Century made a timely arrival at Force Works headquarters and saved Rachel Carpenter from Cybermancer and a corrupted Iron Man. Century also discovered what Iron Man, along with Immortus (in the guise of Kang), had planned for the Earth and informed his teammates about it right before joining the Avengers at Avengers Mansion. There the Avengers opposed the Anachronauts, and Century used his battle staff, Parallax, to guide a small group of Avengers back in time to enlist the help of a young Tony Stark. After helping the Avengers defeat Immortus, Century returned with the rest of Force Works to their base where the group was attacked by Wonder Man and Ultron of the evil Cybermancer’s time line. Ultimately, Cybermancer, Wonder Man and Ultron all suffered the same fate as their doomed reality despite the offer of help from the Scarlet Witch and, after that episode, Force Works decided to disband. Century decided he would travel the Earth and learn more of his adopted home until an urgent situation in Washington state was displayed on the Force Works Chaos computer. Century joined Force Works on their last mission and it can be assumed that, after the task was complete, Century began exploring his new home.