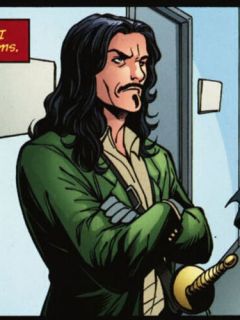 Cavalier was later a part of a group of super villain drinking buddies. They banded together to try and regain their items of power lost in a poker game to Wally Tortolini. He was defeated by Blue Beetle who clothes-lined him in an alleyway.

In recent years, Cavalier was found insane and kept in Arkham Asylum. After the massive escape from Arkham orchestrated by Bane, he escaped from the prison and soon faced Batman, but was defeated with ease.

He later turns up free again as an informant for Black Lightning. According to Black Lightning, the Cavalier is in a closeted gay relationship with Captain Stingaree.Some time later, Drake was badly injured in a massive battle with the Secret Six. The Cavalier's back was broken by Bane and he was presumed to be dead.

Some time later, during a transfer from Arkham, the GCPD vehicle was attacked and the inmates inside were freed. Drake was among them and he was bleeding profusely after the attack. On his escape attempt, he was approached by Leslie Thompkins, who healed his wounds.As a result, Drake started acting as Leslie's bodyguard. He easily prevented a gang fight from breaking out at the clinic that Thompkins had established, and has taken to wearing a nice suit as opposed to his Musketeer costume.

The Cavalier's re-entry into active crime followed, when he was seen attempting multiple small heists around Gotham, only to be foiled each time by Batman or Catwoman. However, those small crimes were merely an attempt to hide his role as the mastermind behind the embezzlement of millions of dollars from the Wayne Enterprises pension fund. Eventually, Batman and Catwoman, working together, were able to follow the money trail to Drake, expose his role in the embezzlement, and return the funds.