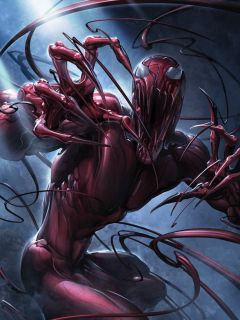 Kasady possesses various superhuman attributes as a result of bonding with the Carnage symbiote. Most of his powers are similar to those possessed by Spider-Man and Venom.

Kasady is superhumanly strong. He has demonstrated to being stronger than Spider-Man and Venom combined and can lift about 50 tons.

Superhuman Speed: Kasady can run and move at speeds superior to those of any normal human being.

Kasady's musculature generates considerably less fatigue toxins during physical activity than the musculature of an ordinary human. He can physically exert himself at peak capacity for about 24 hours before the build up of fatigue toxins in his bloodstream begins to impair him.

Kasady's agility, balance, and bodily coordination are enhanced to levels that are beyond the natural physical limits of even the finest human athlete.

Kasady's reflexes are similarly enhanced and are superior to those of the finest human athlete.

The tissue the symbiote is composed of renders Kasady's body much harder and more resistant to physical injury than the body of an ordinary human. Kasady can withstand high caliber bullets, great impact forces, powerful energy blasts, and falls from great heights without sustaining physical injury.

Despite this, however, it is possible to injure him. Kasady is able to rapidly regenerate damaged bodily tissues much faster and more extensively than an ordinary human. It isn't known, however, if he can fully regenerate severed limbs or missing internal organs. Kasady is also immune to the effects of all Earthly diseases and infections as long as he remains bonded with the symbiote.

Much like Spider-Man, Kasady has the ability to cling to virtually any surface. He can rapidly crawl, walk, or run across even slickened surfaces.

Kasady can project a powerful, organic web-like substance similar to the webbing Spider-Man has. He typically uses this webbing to swing from building to building or as a means of immobilizing someone. The webbing is exceptionally strong, much more so for even the finest human athlete to break.

The symbiote possesses limited shape-shifting abilities in the sense that it can immediately change itself to appear as any type of clothing or garment that Kasady wishes. Kasady can also morph sections of his body, such as his hands or feet, into bladed weaponry such as spikes, blades, or axes. Kasady can also detach these bladed weaponry if he chooses to. For example, he often forms spikes that he expels from his body. The weaponry, however, disintegrates after being separated from his body after a period of about 30 seconds. Kasady can also cause the symbiote to generate tentacle-like appendages from various parts of his body, which he often uses either in combat situations or to restrain someone.