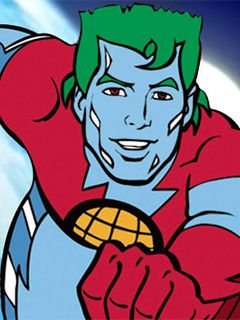 Captain Planet is formed by combining the powers of the rings of the five Planeteers, which represent the four Classical elements: Earth (wielded by Kwame), Fire (Wheeler), Wind (Linka), Water (Gi) - and the additional power of Heart (Ma-Ti) All of these people represent a major ethnicity and each one of them comes from a different continent. Upon his formation, he proclaims, "By your powers combined, I am Captain Planet!"

Captain Planet is the combined and magnified powers of all five of the Planeteers' rings, and stands for all that is good and environmentally-friendly. The Captain is sky-blue skinned, with a grass-green mullet and eyebrows. He wears red shorts, a half-shirt and gauntlets with matching red knee-high boots. His body is composed mainly of a crystal compound.

Captain Planet has a very impressive array of powers: he can fly, has great strength (enough to throw a small asteroid from Earth all the way to Jupiter), the ability to blow hurricane-force winds, telepathy, telekinesis, shapeshifting, matter transmutation, and virtually any other super-power required by the circumstances currently facing him, which, in fact was one of the criticisms against the show (for example, in one episode, it is revealed that Captain Planet has the ability to execute computer programming commands normally associated with anti-virus software). Much like Superman and his kryptonite, however, Captain Planet also possesses weaknesses to pollution, radiation, toxic waste, smog, etc. In one episode, when he meets The Führer, a character based on Hitler, he says that hatred is as polluting anything other pollutant. The powers of the Planeteers' rings are also diminished by excessive pollution in the environment around them. He, like Gaia, is also bound to the physical realm of Earth. While capable of flying into space, his powers -- and even his very existence -- begin to fade the farther away he travels from the planet. Conversely, Captain Planet is often healed from the damage he sustains from pollution by absorbing solar energy, water, or other natural elements. Sometimes, he can intimidate his enemies with insults, as he did with Captain Pollution in one episode.

Captain Planet is an ancient entity, who has served with Gaia for many centuries. While his appearance and certain mannerisms are taken directly from the minds of the Planeteers, he is a sentient being, with his own will. He is also quite aware of current events, even those that occur when he is not active. His modern-day superhero attire and name seem to stem from the modern world, as even Gaia does not give his name in the beginning.

Captain Planet possesses a wry sense of humor and has been known to crack jokes and use puns at times as well.

Though powerful, as in the first episode, when Rigger tries to drill him with a diamond tip drill used for drilling oil, and that only tickled him, he has become depowered at least three times in the series. In one episode, when the powers of Heart and Earth could not return to their rings due to being in outer space; Captain Planet re-forms with only those two rings, effectively leaving him with only the Earth and Heart abilities.

In another episode, when Gaia is taken from Hope Island and transformed into a human being, both Captain Planet and the rings lose their powers, leaving Captain Planet powerless and weak as a normal human. In this story, he is also forced to wear an old hat and coat taken from a dumpster to "blend in" while they search for Gaia.

Also, in one episode, he seems to have been "killed", as Hoggish Greedly is sucking up trees and Captain Planet had turned part of himself into wood and was holding onto a tree. He is pulled into the shredding machine as the tree is pulled in. Mat-Ti screams about feeling pain and the Planteers try to call Captain Planet back, but nothing happens. Later in the show though, they are able to call him for help, but even then he told them that he was not at full strength like normal.