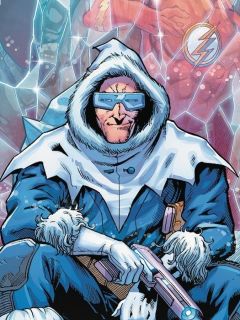 Leonard Snart is the thief Captain Cold, and the on-again off-again leader of the Rogues. While leading the Rogues, Leonard grew increasingly frustrated that their high-tech weaponry was not enough to prevent the Flash from thwarting their every attempt at crime. The Rogues' rule against killing didn't help deal with the problem. After a failed robbery, Leonard angrily pinned the blame on The Trickster, who openly doubted the value of involving Leonard's sister Lisa Snart who was dating Mirror Master. In anger, Leonard fired him, but his frustration and guilt over the issue drove him to drinking. After a sloppy attempt at a robbery from which the other Rogues had to save him, Leonard received an invitation from Dr. Darwin Elias that would make him powerful enough to stop the Flash in his tracks.

The Rogues placed their themed weapons into Elias' genome recoding device, and fused their DNA with the weapons. While Leonard was imbued with the power of Cryokinesis, his sister was not so lucky. She was separated from her body into an astral form. Her real body was left comatose, and afflicted with a malignant brain tumor. Naturally, Leonard blamed himself - as did Lisa's boyfriend Sam, who was trapped within the Mirror World as a result of the experiment. They decided, then, to disband the team.

After the Flash caused an EMP blast that rendered the Gem Cities without power, Leonard learned that the hospital caring for Lisa would not have enough reserve energy to power the laser that could save her from her cancer. Seeking revenge against the Flash, Leonard decided to eschew the Rogues' rules, and kill him. Hoping to get the Flash's attention, Captain Cold froze the river between the Gem Cities, unwittingly endangering the boat on which the Flash's civilian identity was having lunch with his girlfriend Patty and friend Iris in attendance. Cold's attack caused the boat to split in half, separating Iris and three others from the rest of the passengers. In his attempts to save them, the Flash accidentally sent Iris and the others into the Speed Force. In the meantime, Leonard learned that his powers backfired if he got wet, and inadvertently encased himself in ice, from which the Flash extracted him. When he learned of the reason for Captain Cold's attack, the Flash promised to do all he could to help. He created a battery powered by Speed Force energy to power the laser, saving Lisa's life.

Despite that, Lisa was not as grateful as he expected, and went behind his back to reunite the Rogues as their new leader, the Golden Glider. They boxed him out of a train heist, an in anger, Captain Cold turned to the Flash for help in fighting the new Rogues. However, once Leonard came face to face with his sister again, he turned on the Flash, and rejoined the Rogues, just in time to witness the beginning of a gorilla invasion.

Realizing that an invasion of war-like, talking gorillas was not their forté, Captain Cold woke the Flash from unconsciousness, and admitted that despite having only just double-crossed him, the Rogues would have to ally with the Flash to keep their city safe. While the Flash sought out the leader of the gorillas, the Rogues turned to the people, learning that the gorillas were taking them hostage by the bus load. Unwilling to let that stand, they made stopping these kidnappings a priority. Despite bickering between Leonard and Lisa as to who the real leader of the Rogues was, they formed a plan to send the attacking gorillas and their buses into the Mirror World. Unbeknownst to them, that plan resulted in the creation of the Reverse-Flash. Once the Flash had defeated Grodd, the Rogues returned the civilians to their homes.

After yet another heist was thwarted because their plan had put too many lives at risk - and the Rogues' insistence on sparing lives persisted, even under Lisa's leadership - they decided to go to a bar. Leonard, though, felt guilty that while he and the others could still drink, neither Lisa nor Sam Scudder could partake due to her intangibility and his being trapped in another dimension. It had been his fault that they were in that position, and through it, he had lost the trust of his friends, who put Lisa in charge in his stead. The experience, though, led Lisa to decide that she would use her astral powers to pull Sam out of the Mirror World, though it might threaten her own health. Not wanting to lose his sister, Leonard warned her against it. She ignored him, successfully pulling Sam into reality, but causing heart-failure in her real body in the process. In the fallout, the Rogues revealed to Leonard that none of them had ever forgiven him for forcing their powers on them, and he decided that with Lisa so deep in her coma as to be unable to project herself anymore, he would disband the Rogues.

Again, drunkenly attempting to commit the same robbery that they had failed to complete earlier, the Rogues returned to prevent Leonard from getting caught thanks to his foolish behaviour. Finally, he admitted his guilt and apologized, and though they were still angry, the Rogues insisted that they must stick together for Lisa's sake, and that Captain Cold should be their leader if Lisa could not. Leonard's first decision as leader was that they should stay true to the plan of sticking together by breaking the Trickster out of prison. In the process, they received an invitation to the meeting of the Secret Society, and were underwhelmed by it. Upon their return to the Gem Cities, though, they found the place in ruins, and realized they would have to do some good again, if they cared about their home.

With their city practically destroyed by the return of the gorillas, Leonard's main concern was for the safety of his sister. After freeing the police force, proving themselves as anything but killers, they fought their way to the hospital, and discovered that there was no indication that she would recover from her coma any time soon. Unsure of what to do, they found themselves called outside by members of the Crime Syndicate, who were annoyed by their insubordination.

In their fight with Deathstorm, Captain Cold learned that his opponent had the ability to recode DNA, and found his powers removed as the villain separated his DNA from that of his cold gun. Powerless, the Rogues pulled him into the Mirror World, but Sam Scudder's powers were not working properly either, and they were thrown in separate directions. Leonard found himself in another city entirely, and warned the other Rogues that they were to protect Lisa. In the meantime, he would join forces with Lex Luthor, who shared the same goal of undermining the Crime Syndicate's invasion.