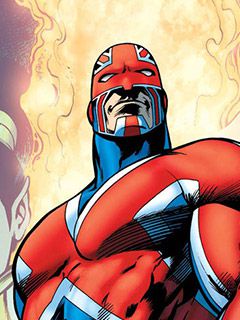 His abilities are powered by interdimensional energies which are concentrated around the British Isles of each reality and also in Otherworld; moving too far away from the field will cause eventual power loss unless a power-enhancing costume is worn. After being lost in the timestream for a while, Brian briefly had precognitive flashes, though these eventually abated. For a time, all of his abilities were localized to Britain; if he went abroad for too long a time without wearing his costume, his powers eventually diminished to nothing. His costume acts as an antenna and battery, allowing him to retain his powers wherever he goes. When he and Meggan destroyed the Otherworld energy matrix at Roma's prompting, however, the energies that allowed him to retain his power within the UK without his costume were dissipated. Hence, to retain his powers anywhere on Earth, he must wear the costume at all times. Recently, Brian has gained the ability to use his powers even without his suit. They are now based on his confidence. With greater confidence comes more power, and he weakens as his confidence does.

Originally, his powers were linked to the Amulet of Right, worn around his neck, and he depended on a mace-like Star Scepter to fly. Later on Merlyn changed his costume just before he entered an alternate Earth (Earth-238), removing the Amulet and the Scepter placing the powers in his new costume. Not long after that he was killed by the Fury and had his body remade by Merlyn, who chose this point to make his powers innate and stronger, with his costume merely serving as a "battery" and amplifier. Currently, Brian's powers are sustained by his own confidence and heritage as the son of a denizen of Otherworld. Thus, the more confident he is, the greater his powers are and vice versa.

While wearing his costume, Braddock's strength is increased to high superhuman levels. At his peak, he's able to lift approximately 90 tons.

Braddock's advanced musculature produces considerably less fatigue toxins during physical activity than the musculature of a normal human. At his peak, he can exert himself physically for about 24 hours before the build up of fatigue toxins in his blood begins to impair him.

While wearing his costume, Braddock's body is surrounded by an invisible force field that renders him highly resistant to physical injury. The field allows him to sustain powerful energy blasts, great impact forces such as bazooka shells or being repeatedly struck by superhumanly strong opponents, temperature extremes, and falls from great heights without being injured. However, repeated impacts from sufficiently powerful forces or weaponry will weaken and, eventually, penetrate the field. The field's density, however, is specially designed to allow oxygen and light to pass through it. This force field is now sustained by his own confidence.

Braddock's agility, balance, and bodily coordination are enhanced to levels that are beyond the natural physical limits of the finest human athlete.

Braddock's reflexes are similarly enhanced and are superior to those of the finest human athlete.

Braddock can purposely draw upon the energies that give him his other powers to temporarily increase the efficiency of his senses, enhancing them to superhuman levels. He can see objects with perfect clarity at much greater distances than a normal human can. His hearing is similarly enhanced, allowing him to hear further than a human and to detect sounds normal humans can't.

Braddock can also channel these energies for the purpose of flying through the air at great speeds. At his peak, he is capable of surpassing the Speed of Sound, 770 miles per hour. The force field that grants him his superhuman durability enables him to withstand the rigors of traveling at such high velocities would have on human tissue without harm, as well as allowing him to breathe normally.

Braddock is a skilled scientist, acrobat and excellent fighter.