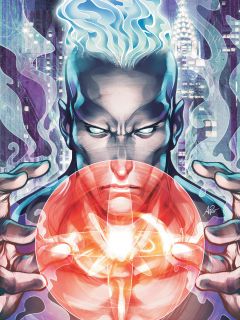 Captain Atom's metallic shell, or "skin," is composed of a portion of the alien being known as Silver Shield, and is called Dilustel. Pieces of the alien's metal body were used in the Captain Atom Project, Project Major Force and similar projects thereafter. Nathaniel is able to coat himself with the metal, either partially or totally. Atom's symbiosis with the metal is such that even partially armored, he is able to access the Quantum Field.

Captain Atom has shown time-traveling capabilities without quantum jumping. Captain Atom through concentration, can travel ahead in time. The process is exhausting and the period he can interact in the future appears to be limited to a few minutes before he returns to the present.

Captain Atom has demonstrated atomic transmutation powers similar to Firestorm, as he was able to turn both Maul and Engineer back to their human forms and once turned Green Arrow's quivers into butterflies. This power can be used instinctively or through concentration.

Captain Atom can also create matter in the same manner he creates energy. In the same way, he can absorb and manipulate matter at a basic level.

Over time if Allen's armored skin were to be ruptured or damaged he would recover at an accelerated rate.

As Captain Atom his strength was such that he was able to go toe to toe with beings such as Superman, Majestic, etc. and hold his own.

He has also shown the ability to telepathically interface with computer networks.

At times, he can use the quantum field to enhance his physical prowess to even greater levels like enhancing and increasing his listening range, augmenting his already impressive levels of strength or even increasing his flight speed to impossibly phenomenal levels.

Captain Atom's metal skin is tied into the Quantum Field, which enables him to absorb and manipulate infinite amounts of energy, for an infinite amount of purposes the amount of which he can do is limited solely by his willpower and imagination. He truly reinforces this fact when he realized that the Quantum Field is completely under his control and he can do anything he wishes. With this realization he tests his powers and by simply thinking of it, he is able to instantly create a replica of our Earth from nothing, complete with life. His power was such that he was able to easily create his own replicas of Superman, Flash, Firestorm and even his own Spectre. His power is such, that he went even further and by simply thinking of it, was able to instantaneously create an entire universe out of nothing, and just as easily destroyed it, but he has never used this level of power again as a result of him mentally limiting himself. Captain Atom's energy absorption power is second to none in the DCU, as he is able to absorb any form of energy and store it in his person. Captain Atom can fire and control energy of any form. He commonly manipulates his energy into force field bubbles, or explosive bombs, but the most common form is a simple blast. Over the years, Captain Atom has become an expert at his energy manipulation and can fire from any point on his body, though he usually uses his hands for ease of aiming. He can fire in multiple directions at once or from every point of his body at once. Several times he has "detonated," releasing a massive amount of energy at once, destroying objects within a certain radius. On more than one occasion, he has used his ability to manipulate all forms of energy to prevent a foe using their own powers, such as the Ray and Firestorm.