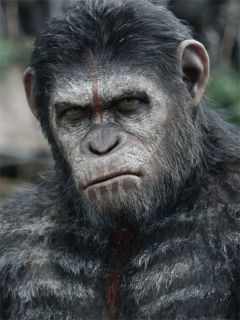 Caesar possessed incredible feats of strength, even for a chimpanzee. He was capable of overpowering several police officers during the battle on the Golden Gate Bridge, he was also stronger than most chimpanzees, most gorillas and any human. He easily overpowered Koba during their first confrontation. Caesar was able to overpower and knock over adult humans effortlessly. He used it to successfully grapple and hold Winter down, an albino gorilla. He even (unknowingly) suffocate the treacherous gorilla to death. He also used his strength to hold back other apes who tried to harm others, even Rocket and Luca.

Like all chimpanzees, Caesar is amazingly fast. After he escaped from the San Bruno Primate Shelter, he was able to get from the facility he was being held at to the Rodman House without being seen or noticed, after Caesar stole the ALZ-113 from his adopted human parents home, at back to the facility without being seen or noticed by any humans, and before sunrise. Caesar was also able to catch a police officer off-guard with his speed and get the drop on Koba while defending his adoptive human father.

Caesar has incredible reflexes, shown in his feats of tree-climbing and how he moved around Will's house as a child, but also during his fight scenes against Rocket, the police officers at the Golden Gate Bridge, a grizzly bear at the ape Hunting Grounds and Koba.

Caesar is shown to have amazing high stamina, he was never shown to be exhausted of running or fighting.

Caesar can endure powerful attacks from other apes and he managed to survive a point-blank bullet that caused him to fall from his home. He was also able to survive what looked like a two-story fall was able to cling to life all the way till the next morning where he would be found and tended to by his human friends.

Caesar learns to defend himself while in captivity due to being continuously picked on by both Rocket and Dodge Landon. He uses these new-found skills to his advantage during the Battle on the Golden Gate Bridge. Caesar was also skilled enough to overpower Koba, a skilled combatant in his own right, on two separate occasions. The first time was when he easily swat him away to protect Will from the enraged bonobo, the second time when both of them use nearby debris as melee weapons, and though the latter put up an incredible fight, Caesar proves to be the superior fighter and easily defeats his rival. Also, during this particular fight, Caesar utilizes psychological warfare, frequently taunting Koba about his betrayal, and how he belonged in a cage. This provoked the ape into attacking him more impulsively and forcing him to lose the fight.

During the battle on the Golden Gate Bridge, Caesar became the first ape to ever ride a horse and was a very skilled rider.

As the son of the late test subject chimpanzee Bright Eyes, Caesar inherited the ALZ-112 through his mother. As he grew older, Caesar's IQ and advanced intelligence had become so high that it outdid that of a human. Because of his intelligence, he was able to teach himself how to defend himself, to pick locks, etc as a way of survival. His intelligence sky-rocketed after being exposed to the ALZ-113 this allowed him to evolve faster than the other apes in the shelter and allowed him to be the first to gain the ability to speak. Caesar was even able to teach himself how to ride a horse during the Battle on the Golden Gate Bridge. Because he inherited his intelligence from his mother, Caesar passed the gene down to his own sons, Blue Eyes, and Milo.

Caesar is a natural-born leader. He has shown this ability on multiple occasions as he was able to bring the isolated Buck (a large gorilla) to his side and use his strength to bring down Rocket, the former alpha of his shelter. Caesar then used his more advanced intelligence to unite all the apes in the shelter to launch a successful escape. This trait is shown again where Caesar had brought countless apes from the Gen-Sys Laboratories and the San Francisco Zoo to build up an ape army which was able to bring the city into complete chaos in mere hours. As the king of the ape colony, Caesar has been able to gain the loyalty of his fellow apes as many of the powerful apes such as Maurice, Rocket, Luca and Ash showed only their faith in him during Koba's usurpation. This is also evident how Koba does not agree with Caesar but simultaneously respects him.

Over the next two years throughout the final human-ape war, Caesar became very proficient in the use of firearms. He shot on a soldier in seconds before he could fire. He also threw a grenade into an oil tank from a distance.

Due to his advanced intelligence and IQ, Caesar is a brilliant tactician. This is proven during the Battle on the Golden Gate Bridge; as he knows that there are police officers on the other side of the Golden Gate Bridge, when he commands the chimpanzees part of his army to climb the bridge, the orangutans to traverse to the bottom of the bridge, the gorillas to push an overturned bus along the bridge, to shield them against police bullets, and when Caesar literally rides a horse to signal his troops to attack, overwhelming the police from all sides and forcing them to retreat. This strategy resulted in Caesar's victory.

Because of his increasing IQ and advanced intelligence from both the ALZ-112 and ALZ-113 drugs, Caesar gained the power of speech, being the first ape to gain this power. This power is later passed on to Caesar's two sons, Blue Eyes, and Milo. In Dawn, Caesar can speak English, almost completely clear, but he cannot form complete sentences.
Superhero Class