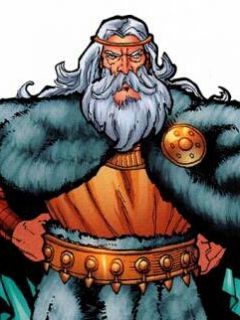 Buri is a member of the extra-dimensional race of beings known as the Asgardians who were worshiped as gods by the ancient Viking and Germanic tribes of Northern Europe. According to Norse myth, after countless centuries of nothingness (save the Well of Life and the unending expanses of frozen ice that were the lands of Mist to the North and lands of Fire to the south) that was the world, Ymir, first of the Ice Giants, emerged from beneath the frigid plane as if by magic. Seconds later, following the birth of Ymir, came the cosmic primeval cow, Audmilla. For ages, Ymir and the magic cow roamed the frozen wastes, Ymir protecting the cow, and the cow nourishing Ymir.

One day the cow found something stirring in the ice. At first the new form was unrecognizable but then "slowly, powerfully, a noble head appeared above the ice... And thus the first of the good Aesir came into being! Look well at him! Look well at the one called Buri! For those who follow him shall be gods!"

Buri grew wise and strong and took a Frost Giantess wife and was succeeded by a son, Bor. Bor in turn took a wife (the giantess Bestla) and fathered four sons: Cul, Odin, Vili, and Ve, the four founding Norse gods - although Cul would be forgotten for a long time.

Buri went into self-imposed exile as a god called Tiwaz. He then discovered Thor after a brutal battle with Hela. He nursed Thor back to health. Tiwaz amused Thor by making icy figures that he animated to life. In friendly matches, Thor wrestled with Tiwaz daily and lost. Once he returned to normal strength, Thor at last beat Tiwaz in a match. He departed Tiwaz's company -- unaware that Tiwaz was in fact Buri.

Hrimhari, Boom Boom, and Warlock were freed by the children ofVolstagg and sent to recruit the aid of Tiwaz. They had nearly reached Tiwaz's dwelling, when they were caught in a net and captured by a Frost Giant serving Hela. Working together, they escaped from the Frost Giant's grasp, and then Tiwaz appeared and imprisoned the Frost Giant in a block of ice. Tiwaz brought them into his cave, warmed them up and advised them on the true extent of Hela's threat.

Tiwaz revealed the location of the Warriors Three and sent Hrimhari and the two New Mutants to free them from Queen Ula and her Savage Swarm. Tiwaz stayed behind and watched them. They managed to free the Warriors Three, though it required Tiwaz's magic to shrink Volstagg so that Warlock could fly him away. Later Tiwaz monitored from his home Karnilla's attempt to revive one of her petrified men. She failed, but Tiwaz concentrated the excess magic from her spell to revive all Stone People of Nornheim