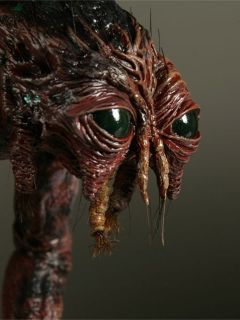 Seth Brundle undergoes eight specific stages in his horrific metamorphosis into Brundlefly. At first just after Seth Brundle merges with the housefly, he appears as a completely normal human. Gradually he begins to develop lesions on his body that sprout large thick insect-like hairs, as well as boil-like growths on his face. Brundle's teeth and fingernails also begin to fall out in this stage.

In the third stage, Brundle's face begins to show noticeable reddish discoloration and grotesque bumps and creases. In the fourth stage, Brundle displays more prevalent facial deformities and his hair begins to fall out. A strange herniated growth appears on his side in this stage.

In the fifth stage which appears only in a deleted scene, Brundle can no longer wear clothes and his body is becoming an infected-looking mess of deteriorated flesh and growths, while a fly limb emerges from the growth on his side. In the sixth stage, Brundle's head has become misshapen and almost all of his hair is gone. His body has also deteriorated even further, as he walks with a hunch and his some of his fingers appear to be partially fused.

In the seventh stage, Brundle completely sheds his deteriorating human skin and becomes Brundlefly. Brundlefly maintains the bipedal stance, relative limb shape and placement, and number of eyes of a human, but possesses an fly-like head and appendages and what appears to be a vestigial fly limb sprouting from its back. In the eighth and final stage, Brundlefly merges with a telepod and has a large hunk of metal embedded in its back, with its entire lower body replaced with a mess of wires and metal.