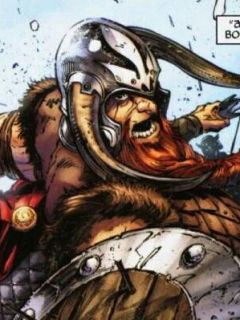 Bor was among the gods that created the universe. He and his wife, Bestla, had a son and called him Odin. Bor taught his son to fight, think, rule and serve, but most importantly, Bor taught Odin how to defend the dreams of his father. What Bor should have educated Odin in is what it meant to have dreams of his own, for when Odin did dream, he dreamt about Earth. He wanted to make a legacy for himself there, so Odin created man. Bor was not pleased with his son's decision, and he unleashed every punishment upon the mortal plane within his power to bring.

One fateful day, during a great war between the Asgardians and the Frost Giants, Odin would have his chance to continue his plans for mankind. Bor was among those fighting but left the main battle to pursue a fleeing giant. Bor stumbled into a trap set for him by a powerful sorcerer who turned Bor into snow. Odin came upon his father as the wind was pulling Bor's form apart, but before he was completely gone, Bor asked his son to find a sorcerer strong enough to restore him. He told Odin his spirit would rest in the snow until he was recalled. Odin told the other Asgardians his father had perished and was proclaimed king the same day. Each winter, Odin could swear he would hear the voice of his father calling to him, but more and more Odin would ignore the voice until he could no longer hear it.

Much later, it was revealed an adult Lokiwas the powerful sorcerer who set the trap for Bor. He, aided by the death goddess, Hela, traveled into the past and instigated the battle between the age-old enemies merely so he could be rid of Bor and ensure his place among the royal family of Asgard. Upon his return to the wintry present, Loki used his magic to restore Bor from the snow. However, he also placed a spell on Bor to alter his perception of the world around him. Humans looked like demons. Vehicles appeared to be giant monsters. Confused by his surroundings and distraught by the realization his son was no more, Bor wasted no time in demolishing everything around him he contributed to Odin's death. Jane Foster sent out a call to Donald Blake informing him of the seriousness of the situation, and soon Thor arrived to quell the disaster.

Bor had never met his grandson, but it wouldn't have mattered for Loki's enchantment extended to Thor's appearance as well. Bor could sense Odin's power within the form of the demon before him, and he assumed this was the monster responsible for killing his son. Bor would soon have his revenge. Striking with a fury only Bor could possess, Thor would have been killed if not for the Odinforce within his body. Thor tried to reason with Bor, but Loki made sure the two could not communicate verbally either. Thor sensed something was wrong and did not want to kill a fellow Asgardian, so he called for help from the Avengers. Unfortunately for him, it was the new team of Avengers led by the Iron Patriot who answered the call. The Patriot ordered his team to take both combatants down, but none could withstand the combined might of Bor and Thor. Bor didn't want to be overwhelmed by superior numbers so he called upon forces potent enough to tear the very world apart. Thor knew if he was to avert this tragedy, he would have to kill his foe. Bor and Thor squared off one final time and charged each other – each one out for blood. The winner was Thor, but a high price was to be paid.

Balder wanted to get to Thor to tell him who he was fighting and to end the battle, but he showed up too late to stop Thor from killing the first King of Asgard. Even as Bor lay dying in the arms of his grandson, he went to Valhalla thinking his body was still in the hands of the enemy. Loki reminded Balder to kill a member of the royal family was punishable by banishment from Asgard forever. Balder had no choice but to uphold the rules of his people, and Thor was cast out. Thor said nothing in his defense except to imply he knew who was behind the fiendish plot, and on the day he would have words with this person – "thunder and fire and darkness shall follow after."