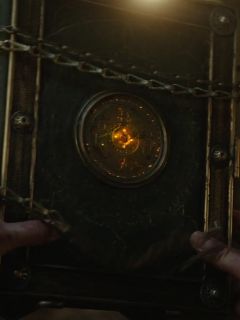 What is Book Of Cagliostro?

History of Book Of Cagliostro

The Book of Cagliostro is an ancient book of spells in the Ancient One's private collection. Its focus on the dark side of mysticism has caused many students to lose their way entirely. The book was studied by Kaecilius to perform a ritual to contact Dormammu and draw energy from the Dark Dimension. Kaecilius began feeling that the Ancient One had failed in her promise to help him find meaning to his wife and son's tragic deaths or found a way to bring them back together. Becoming angrier by this, Kaecilius rebelled against his allies and formed the Zealots to help him perform a certain ritual written in the Book of Cagliostro. Kaecilius and the Zealots went to the Kamar-Taj library with the intent of stealing the book to bring Dormammu to Earth. The Zealots strung up the librarian and Kaecilius beheaded him with his Scythe Daggers before ripping the pages from the Book of Cagliostro, which would allow them to complete their plans. Eventually, Kaecilius deciphered the spell and used it to empower himself and the Zealots, summoning the power from the Dark Dimension and giving them unparalleled control over the Mirror Dimension. The process turned the skin around their eyes dark purple and outlined silver and cracked. Overflowing with these new abilities, Kaecilius began to use the new power to defeat the Masters of the Mystic Arts and destroy the Sanctums to allow Dormammu to come to Earth. Seeking to push his limits, Stephen Strange began tampering with the Eye of Agamotto and the Book of Cagliostro. Using the Eye's power, Strange experimented with its power by making an apple regrow and then rot, and recovering the lost pages stolen by Kaecilius, discovering the Eye gave him control over time itself. Discovering Strange's experiment, Wong and Karl Mordo both warned Strange not to disturb the natural law of the Masters of the Mystic Arts, noting that misuse of items of such incredible power could cause Strange to become trapped in a time loop forever as a result. Strange commented that the book should tell those warnings before the spells themselves. Strange learned from the book that the Ancient One was borrowing power from the Dark Dimension to extend her life. He later used his knowledge of the time loop ability he obtained from the book to defeat Dormammu and get rid of Kaecilius for good.