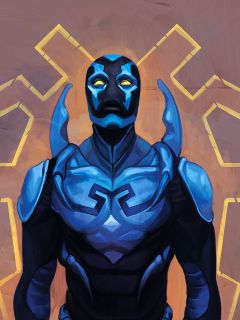 Jaime Reyes was a relatively normal high school student from El Paso, Texas. His father ran a garage, his mother was a paramedic, and his little sister was a brat. Jaime hung out with his two best friends Brenda and Paco, the mediator between the hard-working Brenda and the laid-back Paco. By both Brenda and Paco's accounts, he was a good friend, the kind of person who could let them be themselves, and who could always make things better. Jaime aimed to help his father out at the garage, but Alberto turned him down, not wanting to see his son grow up too fast.

Everything fell apart with the onset of the Infinite Crisis.

Some while before, Ted Kord, the second Blue Beetle, had come into possession of the Blue Beetle Scarab, the artifact which had given Dan Garrett, the first Blue Beetle, his powers. The Scarab had been presumed destroyed early in Ted's superhero career, but it was discovered intact in a pyramid in the Middle East. Ted lost the Scarab on a visit to the Rock of Eternity, home of the wizard Shazam. Shortly afterwards, he met his death at the hands of Maxwell Lord, Black King of Checkmate.

The Rock of Eternity was later destroyed in mystical battle between Shazam and the Spectre, its contents blasted across the world. The Blue Beetle Scarab came down in El Paso, fire and portent in its wake.

Jaime discovered the Scarab on the way home from school with Paco and Brenda, half-buried in a disused lot. He took it home, curious as to what it might be. That night, the Scarab came alive, and grafted itself to the base of Jaime's spine, inducing strange dreams in Jaime.

Booster Gold sought Jaime out, and took him to meet Batman. Booster had been to the future, where he had learned that Batman would seek out Brother Eye and fail - but he had also learned the Blue Beetle Scarab was the one thing capable of seeing Brother Eye.

Jaime went into space with Batman and his team. The Scarab saw where Brother Eye was hidden, and pulled the rogue satellite back into reality. Jaime, together with Black Canary and Green Arrow, destroyed Brother Eye's dimensional stabilizer, preventing it from escaping outside reality again. Once Batman's team had sent Eye plummeting Earthwards, the Scarab shunted Jaime outside dimensions itself, seeking to escape the Green Lanterns on the spaceship.

Unfortunately, the chaos of the dimensional stabilizer's destruction dilated time for Jaime. As far as he knew, he'd only been outside dimensions a couple of minutes; on Earth, however, a whole year had passed.

The next thing Jaime remembered, he had come down in the desert outside El Paso, and Guy Gardner was trying to kill him. Once Guy realized he was fighting a kid, he broke off the fight, but not without promising Jaime he would be back.

Jaime eventually managed to find his way back home, only to discover his year-long absence. In that time, his father had been crippled, forcing him to walk with a cane, Paco had teamed up with a magical metahuman gang called the Posse, and Brenda had been taken in by her aunt after her abusive father died in a DUI.

Jaime's attempts to learn more about the Scarab led him to the Posse - and involved him in their conflict with El Paso's resident crimelord, La Dama, as she sought to bring the magical metas of El Paso under her control. Together, Jaime and the Posse launched a raid on the 'camp' where La Dama was holding her collection of magic-metas, only to find most of them were happy where they were. However, the Posse managed to convince a good half of them that they could return to their ordinary lives, promising the Blue Beetle would defend them. La Dama had no choice but to accept this, or risk facing her guests' 'objections'. Jaime and La Dama made a reluctant truce - both knew the other's secret identity, and could make it public whenever they chose.

Jaime initially believed the Scarab was a mystical artifact, up until Peacemaker arrived, revealing that it was a piece of extraterrestrial technology. Jaime's search for more information took him back to where he'd crash landed in the desert, in an attempt to find out about his missing year. He then headed out on Dan Garrett's trail, looking to find out what the first Blue Beetle had known about the Scarab.

However, it was Jaime's investigation into a cattle mutilation outside El Paso that would provide his biggest lead on the Scarab. His confrontation with the monstrous creation responsible led him to the Reach, the alien civilization who had created the Scarab and left it on Earth.

Jaime discovered that the Reach were galactic conquerors, who planned to add Earth to their list of conquests. Initially, the Scarab had been programmed to be obedient to the Reach, and to subordinate its host's will to them as well. The Reach had intended to present the Scarab's host as Earth's protector, before moving to establish their influence over the planet.

However, during the centuries the Scarab had spent on Earth, it had been infused with magic, the magical 'corruption' preventing the Reach from controlling it. With Jaime's assistance, it had started to develop free will and independence, overriding the Reach's deepest programming.

Nevertheless, the Reach still intended to take over the planet, even without the Scarab to help them. As far as the rest of the world was concerned, the Reach were peaceful 'galactic traders'. Their secret bases and technology were hidden away, out of phase with the rest of the world, and Jaime was the only one who could see them.

Seeing Jaime and the Scarab as the biggest threat to their plans, the Reach attempted to eliminate them through the use of deniable agents, including Earth's supervillains. Jaime, meanwhile, tried to find out what the Reach were up to, and how he could stop them.

Worried that the Scarab might still be a threat, Jaime sought help from the local branch of S.T.A.R. Labs. An encounter with Livewire, who was being assessed there at the time, triggered a strange reaction in both Livewire and the Scarab, resulting in a fight. Superman put a halt to the battle, and helped to reassure Jaime about himself and the Scarab.

Jaime also assisted Traci Thirteen in foiling Eclipso's attempt to kidnap a baby with great magical potential and use it as a new, uncorrupted host. During the course of the adventure, Jaime and Traci developed a romantic interest in each other, and remained in long-distance contact after Eclipso' defeat.

When the Reach recruited Lobo to prevent the launch of a rocket containing anti-Reach technology, Jaime teamed up with the Teen Titans to make sure the rocket lifted off safely. Afterwards, the Titans invited Jaime to Titans Tower, so he could hang out with them, get training, and learn how to fight. Jaime took them up on the invitation - and found himself helping the Titans fight off their future incarnations, the Titans of Tomorrow.
Superhero Class