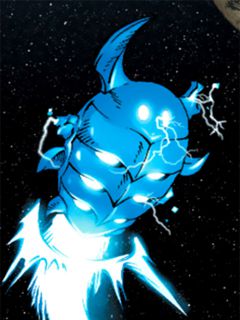 The Reach are a civilization of alien conquerors who take over planets for profit. Millennia ago, they came into conflict with the Green Lantern Corps - and were able to force the Lanterns to a draw.

The Reach and the Corps drew up a treaty, with terms prohibiting the Reach from taking over any more worlds. As a result, the Reach devised more deniable methods of conquest, methods that would enable them to take over a world without anyone realizing until it was too late.

Central to the Reach's plans were the Scarabs, a hive-mind native to Space Sector 2. The Scarabs were living weapons, genetically engineered by the Reach and programmed to be obedient to them. The typical plan was to leave a Scarab and its database on an inhabited world; when that planet reached certain technological milestones, the Scarab would activate and bond to one of the native inhabitants. The Scarab would overwrite the host's personality with the Reach's programming, creating an infiltrator in the Reach's service, armed with the Scarab's vast range of lethal weapons. Millennia ago, the Reach secreted one of the Scarabs on Earth, awaiting the day when it would awaken and summon its masters.

According to legend, the Scarab eventually came into the possession of Pharaoh Kha-Ef-Re, who used its powers to help rule his kingdom, defending his people against evil. What is known for certain is that the Scarab was buried with Kha-Ef-Re when he died, safe inside the Pharaoh's tomb. Over the centuries, thousands died attempting to claim it for their own, but the Scarab remained untouched, resting atop Kha-Ef-Re's sarcophagus.