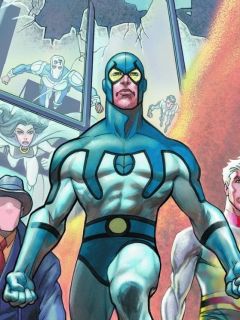 Growing up, Ted was extraordinarily bright. He was good at science, business, and everything else he tried. He considered joining his father's business, Kord Omniversal Research and Development, Inc, of Chicago, but overall, he had no real direction.

When Ted's uncle made an attempt to take over the world, Ted set out to stop him, recruiting the help of his archeology teacher Dan Garrett - the first Blue Beetle, who could call on superhuman powers from an ancient scarab he had found in Bialya. In the course of the adventure, Dan was fatally wounded and asked Ted to carry on the legacy of the Blue Beetle, passing the scarab onto him. However, Ted couldn't get the scarab to work for him, and eventually set it aside, electing to go ahead without it.

Ted trained himself to his physical peak, constructed an aerial vehicle affectionately nicknamed the "Bug", made himself a Blue Beetle costume, and set out to establish his own identity as a superhero, using his wit, agility, and a large number of gadgets to stop evildoers.

After Ted's father lost his wife, he neglected Kord Omniversal, letting it become a shell of its former self. Ted revitalized the company, building it up until it became one of the top R&D companies in the USA, rivaling S.T.A.R. Labs.

During the Crisis on Infinite Earths, Ted was recruited by the Monitor to help fight the Anti-Monitor's shadow-demons. Ted discovered that Dan's scarab was able to utterly destroy the shadow-demons, but was sent back when the Monitor found the scarab couldn't be used as he wished. Ted kept fighting in the Crisis, but lost hold of the scarab in the turmoil, and couldn't find it in the aftermath.

The scarab resurfaced some time after the Crisis, apparently having resurrected Dan Garrett and sent him on a crazed rampage. When Ted confronted Dan and the scarab, the scarab spoke to him, telling Ted it wanted him as its new host, and offering him the use of its powers. Ted refused, and helped Dan break the scarab's control over him, shattering the scarab's physical form and letting Dan die a final death, leaving Ted to grieve for his mentor one final time.

Ted's father eventually recovered enough to take back Kord Omniversal, but the company was devastated by Carapax, one of Ted's villains. Ted left to make his name in the superhero business.

Ted joined the Justice League as it was being reformed in the wake of Operation Humiliation, and often served as the pilot for the League's many vehicles. As part of the JLI, Ted met and befriended Booster Gold. The two had their differences, but served together for many years and had a bond that went beyond their wisecracks and buffoonery.

Ted's mouth and sense of humor often got him into trouble with other members of the League, especially the women. Behind his jokes was a sincerity of heart, the knowledge of his responsibility as the Blue Beetle, and a desire to make the world safer for all.

Following his time on the League, Ted reasserted control of his business from his father, eventually making Kord Omniversal a subsidiary of Wayne Enterprises. He retired from super-heroics for a short time but occasionally helped the Birds of Prey with funding and technology, becoming friends with members of the team. While working with the Birds, Ted discovered that he had a heart condition, limiting the amount of exertion he could manage without endangering his health.

During Identity Crisis Ted led a team in search of Heatwave, one of the initial suspects in the murder of Sue Dibny. Soon afterwards, he came into possession of Dan Garrett's scarab, which Hawkman had rediscovered in a Middle Eastern pyramid, untouched. However, the scarab was inert, as it had been when Ted had first received it from Dan, and did not respond to him.

A little while later, a shipment of Kryptonite was stolen from one of Kord Omniversal's warehouses. Ted's various friends and allies looked into it for a while, but soon returned to their own lives. If that hadn't been enough, Ted was then set upon by a gang of the Madmen.

With Booster's help, Ted set out to investigate the Kryptonite theft. In so doing, he unwittingly ran up against the shadows of the impending Infinite Crisis. During the course of his investigations, he lost the scarab to the wizard Shazam, saw Booster blasted by a bolt of energy from Brother Eye, which landed Booster in hospital, and witnessed the beginning of the Rann-Thanagar War. However, Ted found that no-one else, apart from Wonder Woman, seemed willing or able to hear what he'd discovered about the theft, leaving him to go it alone.

On the trail of his last remaining lead - a bug placed on him by the Madmen - Ted tracked the signal from the bug to Checkmate headquarters in Switzerland, where he discovered a series of files that held the identities, strengths and weakness' of all of Earth's heroes. There, he confronted the mastermind behind Checkmate - its Black King, and Ted's one-time friend, Maxwell Lord, who planned to kill Earth's metahumans using Brother Eye and the OMACs, making the planet safe for humanity. Seizing his opportunity when Checkmate's files were unexpectedly deleted, Ted made a break for it - but was brutally beaten by an OMAC and locked up. After being offered a chance to change sides by Max, he told Max to "rot in hell" and was shot and killed by his former ally.