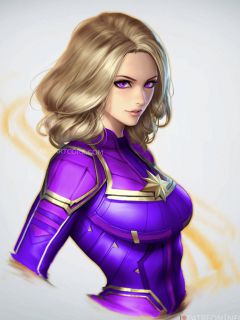 Attack Potency - Multi-City Block level (All adult Deviants are at the very least this strong. Scales to Turboblaze and other peak humans like him) | Planet level (Stated by Alliance Saga Heartstone that she punches much harder than her) | Solar System level (Capable of easily fighting off Titan soldiers, who can easily destroy solar systems. However, she was swiftly overpowered by General Akhan) | At least Multi-Universe level, more than likely Macrocosm level (Could physically contend with Volume III Heartstone and easily draw blood from her. Also able to hold a beam struggle with Volume III Heartstone, though she was clearly inferior) | At least Multi-Universe level, more than likely Macrocosm level (Stronger than as a vampire, due to her powers being unlocked by that transformation and becoming stronger since then)

Stamina - High (Can exert themselves at maximum effort for inhuman levels of time. Takes an abundance of overwhelming force to tire a Deviant, due to their regeneration), Nigh-Infinite with her powers (Capable of maintaining her full speed for hours and hours on end with little strain)

Intelligence - Supergenius (The fifth smartest mortal alive, and the third smartest woman in creation. A rival to Heartstone in intellect, and co-created many of her best inventions and a majority of the tech within Prince Tower. Her brain works far faster than anything or anything in the solar system, and almost everything in creation)