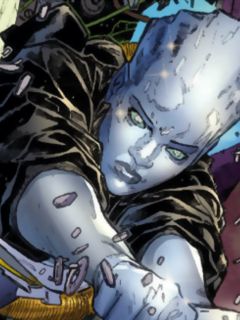 Roxy Washington was born into hip-hop "royalty" as the daughter of Roy "Daddy Libido" Washington and Angel "Sexy Mutha" Depres. Having appeared in her parents' rap videos from a young age, Washington was often targeted by would-be kidnappers and assassins.

Destined to follow in her parents' footsteps, Washington turned her back on that life and enrolled as a student at the Xavier Institute under the tutelage of Gambit. Washington was more concerned with improving herself rather than the escalating human/mutant situation. Her school record showed her to be a good and attentive student with a strong sense of responsibility.

As a member of Gambit's squad, the Chevaliers, Washington was forced to deal with the arrival of newcomer Foxx's infatuation with her teacher, despite being attracted to Foxx herself, until Foxx was revealed to be the shapeshifting Mystique.

Bling! retained her powers after M-Day. She helped Havok's squad during the Sentinels' arrival and Apocalypse's return due to lack of members, particularly Polaris's depowerment, Wolverine's frequent disappearances, and Gambit's betrayal.

Bling! was captured by Belasco in Limbo, alongside most of the other students.

When the X-Men moved to San Francisco and set up a new base in California, Bling! followed. She helped to control rioting surrounding the Proposition X, legislature which was attempting to limit mutant reproduction that was being pushed by Simon Trask and his anti-mutant group, the Humanity Now! Coalition. During the final fight on Utopia, Bling teamed up with Frenzy and Nekra in taking on Ms Marvel (Karla Sofen).

After an attack by Emplate, everybody living on Utopia was warned to stay close together and report anything out of the ordinary. Roxy was greeted by Emplate, who claimed dinner is served.