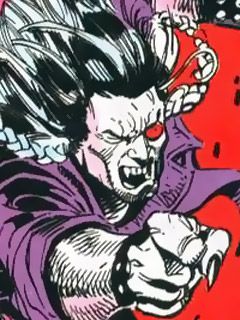 Due to his demonic heritage, Blackout possesses a variety of superhuman powers.

Blackout possesses superhuman strength, one of the more common powers possessed by demons or beings with some degree of demonic heritage. At his peak, Blackout can lift about 2 tons.

Blackout can run and move at speeds that are beyond the natural physical limits of the finest human athlete.

Blackout's advanced musculature produces less fatigue toxins during physical activity than the musculature of a human. At his peak, he can exert himself at peak capacity for several hours before the build up of fatigue toxins in his blood begins to impair him.

Blackout's body was somewhat tougher and more resistant to physical injury than the body of a normal human, possibly a by-product of his superhuman strength. Blackout's body could withstand the rigors of great impact forces. He could withstand impacts, such as falling from several stories or being struck by someone possessing a lower level degree of superhuman strength, that would severely injure or kill a human being.

Blackout's agility, balance, and bodily coordination are enhanced to levels that are beyond the natural physical limits of the finest human athlete.

Blackout's reflexes are similarly enhanced and are superior to those of a normal human.

Blackout, befitting the name he uses, is able to psionically extinguish any natural or artificial light source within his immediate vicinity.Supernatural light sources like Ghost Rider's hellfire are not affected by Blackout's power.

Blackout is a formidable hand to hand combatant and is also experienced in wrestling techniques. He is also a highly trained acrobat, which he uses in combination with his great agility to use a unique freestyle type of fighting that he combines with his more conventional fighting skills.