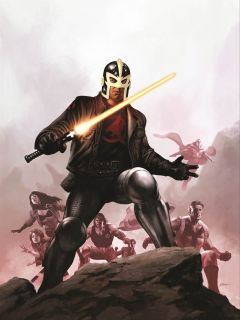 Dane Whitman inherited his uncle Nathan's castle. He was unaware that his uncle had been the villainous Black Knight II until finding notes and inventions. Eventually he came upon the Ebony Blade. Passing its test, Sir Percival explained the history of the blade and its curse. Taking the weapon Dane decided to be a hero, joining the Masters of Evil just as his uncle did, but with the intent of infiltrating them from within. This he did to aid The Avengers, but they did not trust him until he later assisted them against Kang the Conqueror.

Dane later fought alongside the Defenders against the Enchantress, but was apparently turned to stone by her. The Valkyrie took possession of the Knight's Ebony Blade and his winged horse, Aragorn, and Dr Strange took custody of his petrified form but the Defenders later attempted to restore him using the Evil Eye of Avalon. They discovered, however, that Whitman's spirit had been transported back in time to the 12th Century where it now inhabited the body of his own ancestor, Eobar Garrington. Whitman declined to return to the present day with the Defenders, and Valkyrie returned his sword to him; Whitman allowed her to keep the horse. Later, however, he was equipped with a new flying horse-Valinor-and transported (still in Garrington's body) to the present day by the mage Merlyn, to carry out a special mission. Sent to find the amnesiac hero Captain Britain, Whitman then travelled with him to Otherworld to battle the evil Mordred and his master, the demonic Necromon, and save Camelot (at some point during the course of this quest, both heroes were briefly abducted by the Grandmaster to participate in his 'Contest of Champions'). After this mission was concluded, Whitman was returned to the 12th Century, though he did briefly travel forward again to attend Merlyn's funeral. Back in the past, he protected the mystical island of Avalon from the demonic Fomor, until Garrington's body was eventually destroyed during a battle involving the time travelling Avengers. Whitman's spirit returned to his original body, which became flesh and blood again.

Dane served several tours of duty with the Avengers. While a member, his scientific knowledge came to be useful, especially when such minds as Iron Man and Hank Pym were not on the roster. Dane participated in several Avengers events, such as the attack on Avengers Mansion by the Masters of Evil (during which he was captured and beaten by Mister Hyde) and Operation: Galactic Storm, during which he was part of Captain America's team, sent to the Kree Empire. At the end of that mission, Dane was among the Avengers who followed Iron Man to execute the Kree Supreme Intelligence, and was in fact the one who struck the mortal blow.

The curse of the Ebony Blade became too dangerous, and Dane eventually abandoned it choosing to use a technological weapon instead. On a few occasions he needed the help of Doctor Strange and Victoria Bentley to avoid being possessed by its hunger for blood and to reverse being turned into stone. Dane thought he had rid the curse by freeing Sir Percival's spirit.

While Dane would be away with the Avengers, Victoria Bentley retained ownership of the castle so he would not lose it. She could easily watch over the property as it neighbored hers. However, Dane's former squire became possessed by the Ebony Blade and turned into the Bloodwraith. The Bloodwraith accidentally killed Victoria during a duel between the Bloodwraith, Dane & Deadpool.

While an Avenger, Dane was involved in various relationships as time went on. For a time, we was enamored of the Wasp, though nothing ever came of this other than jealousy of Jan's male friends. He was later in a love triangle with Crystal and Sersi. He renounced his feelings for Crystal as she and her estranged husband Quicksilver attempted to reconcile. He agreed to become Sersi's 'Gann Josin', a sort of psychic link between soulmates. After Proctor (an evil alternate version of Dane) was finally defeated, Sersi felt she was too dangerous and must exile herself. Dane went along with her.

The two eventually ended up in the Ultraverse along with several other heroes and villains. Dane even briefly led the Ultraforce. Eventually the two decided to return to Earth-616. However, Sersi's teleportation instead sent them into Earth's past.

While Dane was in the body of his ancestor Eobar Garrington during the Crusades, he met the knight Bennet du Paris, who shortly became Exodus. This explained why Dane felt Exodus was somehow familiar when they 'first' met in Genosha sometime earlier.

Sersi was later able to transport herself and Dane back to the present. Their 'Gann Josin' has apparently been broken and they have gone their separate ways aside from acting as reservist Avengers. Dane joined Luke Cage's Heroes for Hire shortly after his return.

Not long after his return to earth, the Lady of the Lake appeared to Dane, telling him he was destined to become Avalon's champion. She presented him with a new armor as well as the Shield of Night and the Sword of Light. While working with Heroes for Hire Dane came across the High Evolutionary's Knights of Wundagore and agreed to train them. It was at this time that Dane acquired one of their "atomic steeds".

Dane had converted Garrett Castle into a museum. Dane suddenly switched bodies with the original Black Knight, Sir Percy of Scandia. The investigating New Excalibur found an ancient scroll in Percival's tomb showing the team as the saviors of Camelot. Traveling back to the era of King Arthur, Whitman met Percy and helped his ancestor, King Arthur, and Merlin defeat the dragons plaguing the kingdom (revealing the "dragons" to be Makluans in the process) and returned to the present. After assisting Excalibur in tracking down Juggernaut in Korea and returning him to the team, Whitman left in search of his real Ebony Blade.

Recently returned to England, Whitman appeared to be wielding the original Blade again, using it to slaughter invading Skrulls.