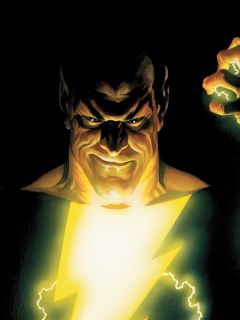 Black Adam is gifted with a panoply of powers that appear to correspond to and match, if not exceed, those of Captain Marvel. Essentially, he is gifted with six attributes of particular gods who are exemplars of them. He is as strong, fast, durable, powerful, knowing, and as possessed of inner strength as six gods who are pinnacles of those qualities. These powers are both magical and divine in nature. They are magical insofar as it was the Wizard Shazam who originally provided the link to the gods who empower Black Adam, but the powers themselves come directly from the six gods who lend their puissance to him. This is a significant distinction insofar as the gods seem to have shown reluctance to abandon their avatar, even when his magical patron would clearly rather have removed his gift. While the wizard was able to initially displace the powers into an amulet, this was clearly not sufficient to keep Adam from eventually reclaiming them. Nor was Shazam apparently able to repeat the feat in the modern age. Captain Marvel, having apparently inherited the wizard Shazam’s power after the Spectre slew him, was roughly rebuked when he sought the gods’ intercession with Black Adam during the events of 52. It took an impressive coalition of magic-users acting in concert with Marvel, and the simultaneous distraction of fighting a large contingent of the world’s heroes, to change the Word and temporarily disempower the violent powerhouse.

The chief distinction between the power of Captain Marvel and that of Black Adam is that Adam’s powers are provided by the Egyptian, rather than the Greek, pantheon. Presumably, the two are nearly equal in power, though it is conceivable that one god might be more potent than another (an interesting note is that Solomon, Achilles, and Hercules - three of Marvel’s patrons, were originally at least half mortal). Aside from the short-lived Black Marvel family, Black Adam does not share his power the way Billy does with Freddy, rendering him much more powerful in most situations. Therefore, any feat demonstrated by Captain Marvel should be at the very least duplicable by Adam. Teth even in mortal form shows remarkable ability to inspire his followers, even to their deaths, and was an able warrior before being given his abilities. Moreover, Adam has had centuries more experience with his powers than most super-beings, and is an accomplished and iron-willed combatant even without his powers. The powers granted to Black Adam are as follows:

(stamina): Nigh-invulnerable, and does not need to eat, sleep, or breathe (can survive unaided in space). Extremely resistant to magical attack, and effectively tireless. Even when a specially prepared bullet made from the Rock of Eternity could puncture him, Adam dug it out with his fingers and healed almost immediately. Has survived the equivalent of a major astronomical event being teleported inside his skull, and Captain Marvel has withstood being literally turned inside out by a spatial tesseract bomb with zero ill effects! Shu is the Egyptian god of the air, whose name means “he who rises up”.

(Horus - speed) - Black Adam can fly, move, and fight at, at least Mach 500 in an atmosphere; and in space, at faster than light speeds. In one account, Adam traveled from the farthest reaches of the cosmos to earth in 5000 years (the universe is 156 billion light years wide). Heru is the Egyptian god of the sky and victory personified.

Amon(strength) - Provides Adam with truly incredible strength. In a strength class with Superman and Captain Marvel, and able to toss one-handed an aircraft carrier (hundreds of thousands of tons) for possibly hundreds of miles. On one occasion, He was successfully able to hold his own against an assemblage of The Justice League, Justice Society, and The Teen Titans, Something neither Superman or Captain Marvel have been able to do. Amon is considered the king of the Egyptian gods, a god of virility and the ‘breath of life’

(Thoth-wisdom) - Access to godly level of knowledge, magical and mundane. Can simply 'know' appropriate knowledge for a situation, and be counseled as to the best course of action. Adam has voiced distrust for the voices of the gods to Captain Marvel. Adam’s gods have also expressed approval for his more brutal actions in "52", which appears to be very different than the stance of Captain Marvel’s patrons. Black Adam’s senses are phenomenally sharp as well, though nowhere near the level of Superman’s. Zehuti, or Thoth, is the Egyptian god of magic and writing, whose magical powers were so great, that those who read the 'Book of Thoth', became the most powerful magician in the world.

(power) - Aton provides the magic lightning that transforms Adam, and Adam can use the lightning bolt as a weapon by dodging it and allowing it to strike an opponent. The power of Aton enables Adam’s flight, enhances his physical abilities and invulnerability, and gives him godly resistance against magical attacks. This power also allows him the power of interdimensional travel. It is feasible that the power of Aton and the wisdom of Zehuti could be used more extensively, if required, but that Adam’s general invincibility makes him favor the direct approach. Aton is the Egyptian god of the solar disk and of creation itself

(courage) - Provides a godly degree of inner strength, including superhuman resistance to psychic manipulation, or any form of mind control. It is worth noting that even in mortal form Teth demonstrates phenomenal determination, mental toughness, and nerves of steel. Mehen, or “one who is coiled” is the serpent god who fought the demon Apep to protect the sun.