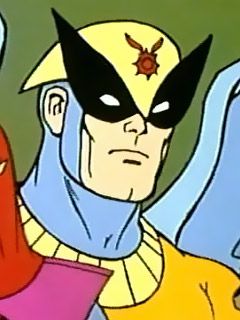 Birdman was the protagonist of one of two superhero series sharing the show "Birdman and the Galaxy Trio". The two series never had crossovers. Birdman was a creation of Alex Toth. The series had 21 episodes, broadcast between September 9, 1967 and September 6, 1969. Each episode had two tales of Birdman and one of the Galaxy Trio.

Toth wrote an elaborate background story for Birdman though it was only briefly and vaguely mentioned in the series. Ray Randall was chosen by the high priest of Ra (Egyptian Sun God) to become an avatar of their deity and become Ra's champion on Earth. He was to "shine the light of justice" on the world by doing heroic acts. His powers were activated when he shouted his own codename, "Birdman". Ray could fly, fire powerful blasts from his hands and form an energy shield for defense. He absorbed solar energy and needed the sunlight to recharge his energy reserves. He would be much weaker during the nighttime and helpless when in locations devoid of sunlight, such as underground caverns and castle dungeons.

He had his homebase built within an inactive volcano and took up work with the Inter-Nation Security, a secret agency. His contact with the agency was Falcon 7, an eye-patch wearing agent. Falcon would update him on assignments and the activities of established foes. The most regularly appearing sidekick of Birdman was Avenger, an eagle. His origin was never elaborated but Avenger had super-powers of his own: human-level intellect, strength sufficient to carry a weakened or knocked out Birdman and flight at high speeds.

At some point Birdman shared some of his powers with a human sidekick, Birdboy. The sole survivor of a ship attacked by pirates, the boy was effectively adopted by Birdman. While the wings of the older hero are natural, the junior one has mechanical wings. A villain hypnotized and mutated a young aerialist to Birdgirl. By the end of her first appearance she had become Birdman's third and last sidekick.

Birdman faced several super villains though most were either one-shot characters or appeared in two episodes. The one constant was the employer of most of them, F.E.A.R. . A secret organizations whose members wore hoods and addressed each other by codenumbers. The leader was Number One.