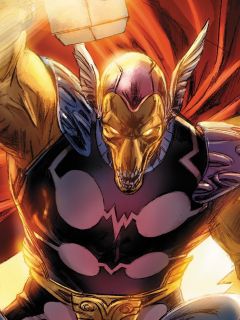 The Burning Galaxy was destroyed through the machinations of Surtur. The surviving Korbinites decided to choose a champion who they would follow to their new home. the Korbinite known as Beta Ray Bill was successful and was transformed into a cybernetic being resembling a fierce creature. The Korbinites then amassed their fleet, put themselves into stasis, and followed Bill's ship, Skuttlebutt. Bill fought legions of demons sent by Surtur.
When the fleet approached the Milky Way galaxy, it was detected by a SHIELD satellite. Nick Fury asked Thor to investigate. Thor was deemed a threat by Skuttlebutt, so Bill fought him. During the battle Thor was separated from Mjolnir and reverted to Donald Blake. Curious, Bill picked up Mjolnir and the hammer deemed him worthy, granting him the power of Thor. Skuttlebutt landed but both were transported to Asgard by Odin. Bill said the hammer should remain his as he had won it fairly.
Odin decreed the two battle in Skartheim to the death to see who would reclaim the hammer. Bill's Korbinite physiology gave him somewhat of an advantage in the lava-filled realm, and he was able to win. However, he refused to take Thor's life. It is thought that Odin chose this location to further test Bill's worthiness and to teach Thor a lesson. Mjolnir was returned to Thor, with Odin ordering the creation of the hammer Stormbreaker for Bill to use. Bill continued to protect his people and assist the Asgardians. He grew particularly close to Sif, who accompanied him to battle Surtur's demons.
At one point, a mysterious disease seemed to kill the Korbinites, but they were able to be revived. Bill spent time in space as part of the Star Masters, and was called to join his fellow hammer wielders Thor, Thunderstrike, and Dargo Ktor to battle as the Thor Corps. His body briefly was reconfigured to use cosmic rather than mystical powers through a special synthesis by Odin and the Silver Surfer.
Bill returned to Asgard during Ragnarock. He fought ferociously, willing to die alongside the Asgardians in the climactic final battle against Surtur's forces. But Thor sent him back to his people, asking him to keep the memory of Asgard alive.
The Korbinites had settled on a new planet, but were in danger due to an approaching foe. Bill was chastised for spending too much time with the Asgardians. His old rival Alpha Ray even attempted to sabotage his efforts to prove he was no longer worthy of being the race's guardian. The foe was actually Galactus, Stormbreaker revealing his familiar humanoid form, with a new herald named Stardust. The planet was lost and some of the fleet was destroyed. Stardust continued to attack Bill as Galactus fed on the planet's energies. During their battle the evil Asteroth was mistakenly freed from its prison by a portal Stardust opened. Asteroth was defeated, and Bill eventually found himself on Earth. He has since bonded with a man named Simon Walters.