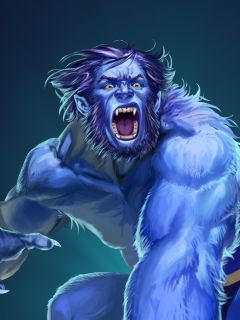 The Beast has always possessed some degree of superhuman strength, the limits of which have varied at times due to subsequent mutation. During his teens, he was able to lift approximately 1 ton. After mutating into his simian form, and after this mutation eventually stabilized, his strength was increased to the point where he could lift about 10 tons, which was sufficient to smash through a brick wall with a single punch and to tie an iron barbell into a knot. Although the Beast has since mutated into a somewhat larger, more feline form his strength still remains at the 10 ton level.

The Beast can run and move at speeds that are slightly beyond the natural physical limits of the finest human athlete. He can run at speeds up to 40 miles an hour over short distances, particularly if he runs on all fours.

The Beast's highly advanced musculature produces less fatigue toxins during physical activity than that of an ordinary human. He can exert himself at peak capacity for several hours before the build up of fatigue toxins in his blood begins to impair him.

The Beast's bodily tissues are harder and more resistant to certain types of injuries than the bodies of normal humans. His physiology can withstand great impact forces, though he can be injured by many types of conventional weapons such as standard firearms and bladed weapons. However, he can withstand physical impacts, such as falling from several stories or being physically struck by many super-humanly strong beings that would either severely injure or kill a normal human with little to no discomfort.

The Beast's agility, balance, and bodily coordination are enhanced to levels that are beyond the natural physical limits of the finest human athlete. Like some of his other powers, his agility has varied at times due to ongoing and subsequent mutations. While in his simian form, he had the agility of a great ape combined with the acrobatic prowess of an Olympic level gymnast. He could walk a tightrope or a slack rope as easily as most people can walk on a sidewalk. He could also walk on his hands for many hours, or perform a complicated sequence of gymnastic stunts such as flips, rolls, and springs. He could easily match or top any Olympic record in gymnastics. Upon mutating into his feline form, his agility remains roughly the same, though it has taken some time for him to become accustomed to the physical changes.

He can perform many tasks with his feet as easily as a human could do with his hands. His manual and pedal dexterity are so great that he can write using both hands at once or tie knots in rope with his toes. Although he can still perform many of these same tasks in his current feline form, his dexterity isn't quite what it once was.

The Beast's metabolism enables him to repair mild to moderate injuries much faster than a normal human. For instance, he can recover from minor ailments, such as a cold, within a few hours. More severe injuries, like broken bones, can heal within a few days, whereas normal humans might take weeks or even months.

Hank possesses enhanced, acute senses that are comparable to those of certain animals, enabling him to see and hear distant objects more clearly than a normal human, and identify and track someone purely by scent. He also possesses cat-like night-vision.

Beast has the ability to secrete pheromones to attract members of both sexes.

The Beast sports retractable, razor sharp claws at the tip of each finger and toe. Their natural edge, coupled with his strength, are sufficient to rend most conventional materials including flesh, wood, stone, and even some types of metals. He also possesses elongated canines that he can use, if he chooses to do so, as effective weapons in close quarter combat situations.

A world-renowned biochemist, Henry McCoy's greatest asset is his keen scientific mind. He possesses a genius-level IQ, with extraordinary expertise in genetics, biochemistry, electronics and other subjects. Beast is also an accomplished keyboard musician.

The hyperactive, bouncing Beast is an excellent hand-to-hand fighter. He gained his initial combat training from Professor Xavier, and then continued his tutelage in combat gymnastics from Captain America. He typically uses a freestyle form of combat, similar to that of Spider-Man, that allows him to make full use of his great strength and agility. During times of anger, however, the Beast is known to resort to brawling and street fighting tactics.