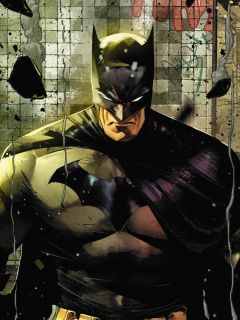 Although he has no superhuman powers, Batman's unstoppable determination and strength of will make him an extremely formidable opponent. This makes him able to function while tolerating massive amounts of physical pain, and also allows him to resist telepathy or mind control. His willpower is strong enough to operate a Green Lantern Ring when necessary.

It is widely known that Batman has the ability to instill fear in others, even the people that know him best are intimidated by him. Even those who aren't afraid of the likes of Superman fear Batman. His ability to inspire great fear made him eligible for induction into the Sinestro Corps, although he was able to fight off the power ring's control.

Batman is adept in interrogation techniques, often using law enforcement methods as well as torture. Several methods seen include hanging a person over the edge of a building by one leg or chaining a person upside down and beating them. He usually just plain uses his frightening appearance to get answers. "Fear is an excellent motivator" he once said.

Through intense training, specialized diet, and biofeedback treatments, The Batman represented the pinnacle of human physical prowess. His physical attributes exceeded that of any Olympic level athlete that has ever completed. Strength, speed, stamina, agility, reflexes and coordination were at peak human perfection. Batman began his physical and mental conditioning when he was 11 and then intense physical training and weight lifting at age 12. He has mastered full body control by the time he was 18. Wayne abstains entirely from drinking alcohol, though he presented Bruce Wayne, his alter ego, as a borderline alcoholic (he created this illusion by drinking ginger ale and pretending it is champagne). Batman's refusal to drink was directly linked to keeping his body in its absolute best. Bruce Wayne, since the age of 15, has created a strict diet to enable his body to develop and operate at its most proficient, along with biofeedback treatments (using portable/non portable machines to stimulate muscles to contraction. Batman has performed amazing physical feats due to his superior physique. He engaged in an intensive regular regimen of rigorous exercise (including aerobics, weight lifting, gymnastics, and simulated combat) to keep himself in peak condition, and has often defeated opponents whose size, strength, or other powers greatly exceeded his own. He has spent his entire life in pursuit of physical perfection and has attained it through constant intensive training and determination.

Through his martial arts training, he has become an expert on virtually all types of weaponry. He is an exceptional swordsman as evident in his fight with Ra's al Ghul, his proficiency in jui jitsu can proclaim his swordsmanship skill. Proficient at knife throwing, Escrima, & melee weapons mastery, having mastered Kobudo. He was trained and became proficient in all arms. He soon learned expanded melee weapon techniques and he has learned expanded weapon/device sciences. He still practices during his combat sessions to keep his skills intact, though he prefers unarmed combat.

Batman is a brilliant, virtually peerless, detective, strategist, scientist, tactician, and commander; he is widely regarded as one of the keenest analytical minds on the planet. Given his lack of superpowers, he often uses cunning and planning to outwit his foes, rather than simply "out-fighting" them.

Batman engages in an intensive exercise regimen, and because of this, his strength, like all other physical attributes, is at the peak of human perfection. He is shown to be able to bench-press at least 1000 lbs.