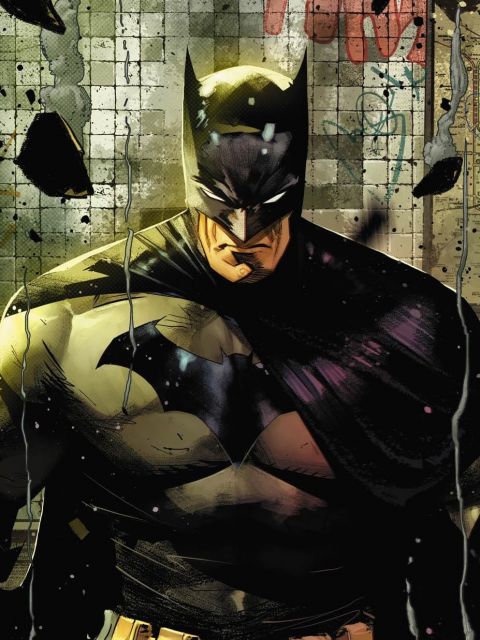 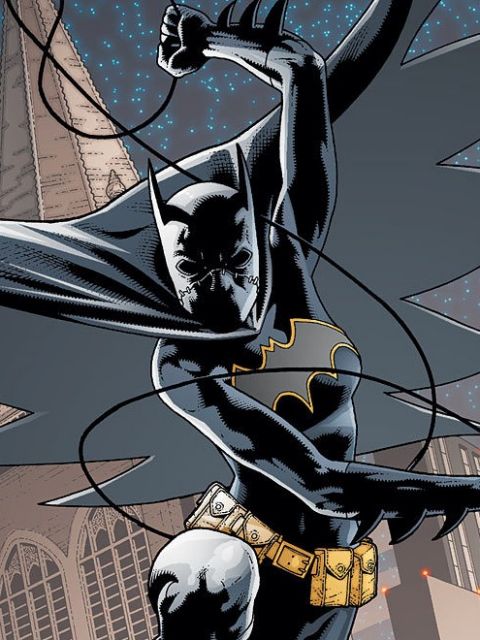 salstyles 1 mo 11 d
Batman vs Batgirl IV #
Batgirl IV batman said himself he would lose in a real fight one on one with her. If he admits that then what else does the public want?

Batman Batman has beaten her before Cass never beaten batman

Batman Cassandra have her body reading but Bruce has physicals on his side, I think experience will play a key role here.
show 22 replies

Batgirl IV You do realize it's been explicitly stated that Batman CANNOT defeat Cass, even on his best day, right?

Batgirl IV Cass has feats beyond Bruce too, so...

And the statements of Cass > Bruce are backed up by feats.
Last edited: 11 mo 23 d ago.

Bodhi 11 mo 23 d
Batman vs Batgirl IV #
Batman He still has his gadgets in this fight ? I'm not knowledgeable on batman sorry
Last edited: 11 mo 23 d ago.

Batgirl IV He does, but so does Cass. And gadgets won't help him much when Cass has beaten people stronger and better at fighting than Batman.

Bodhi 11 mo 23 d
Batman vs Batgirl IV #
Batman She still has to defeat someone as strong and skilled as Batman. Do you think Batman's morals prevent him from winning this fight ?
Last edited: 11 mo 23 d ago.

Batgirl IV Cass is stronger and more skilled than Batman. This is shown numerous times. And Batman's morals won't change anything since Cass has the same morals to an even more extreme, yet she's still portrayed as superior to Batman.

Bodhi 11 mo 23 d
Batman vs Batgirl IV #
Batman The only non-enhanced human stronger than batman is bane. He's stronger, more durable and sporting a superior tactical mind. If Post-crisis feats are allowed he's more skilled, her only advantages are her speed and body reading ability.

Batgirl IV Well, that's false. Because Cass isn't enhanced, yet she consistently beats metahumans and outmatches Deathstroke. Don't make claims like that about characters you aren't knowledgeable about.

Batman literally is not more skilled than her, do you want to see the various scans that prove Cass is superior to him?

Bodhi 11 mo 23 d
Batman vs Batgirl IV #
Batman I don't need to see your scans, I've just read Batgirl Vol 1, 2 and 3 so I know what she's capable of. Her high end feats consist of defeating Rose Wilson and giving Deathstroke a fight, this is good but not nearly enough to beat geared up Batman in an all-out fight. She's inferior to Batman in strength, durability, pain tolerence, skill and her gear is nothing to be proud of. She has a chance against batman because of her body reading ability and speed.
Last edited: 11 mo 23 d ago.

Batgirl IV Yeah that's not even the only things Cass has appeared in. And you aren't even analyzing her feats correctly. Nor have you acknowledged her better feats.

Cass has also defeated Lady Shiva, who Batman himself said he hadn't even beaten. Batman himself also stated that NOBODY was as good of a fighter as Cass, so he is not more skilled than her. You must not have read well if you think Batman is anywhere near her in skill. And again, Deathstroke said Batman at his BEST wouldn't beat Cass.

Plus Batman can't even touch Cass, as he tried and failed. Miserably. A casual and suppressed Cass treated Batman like a joke. 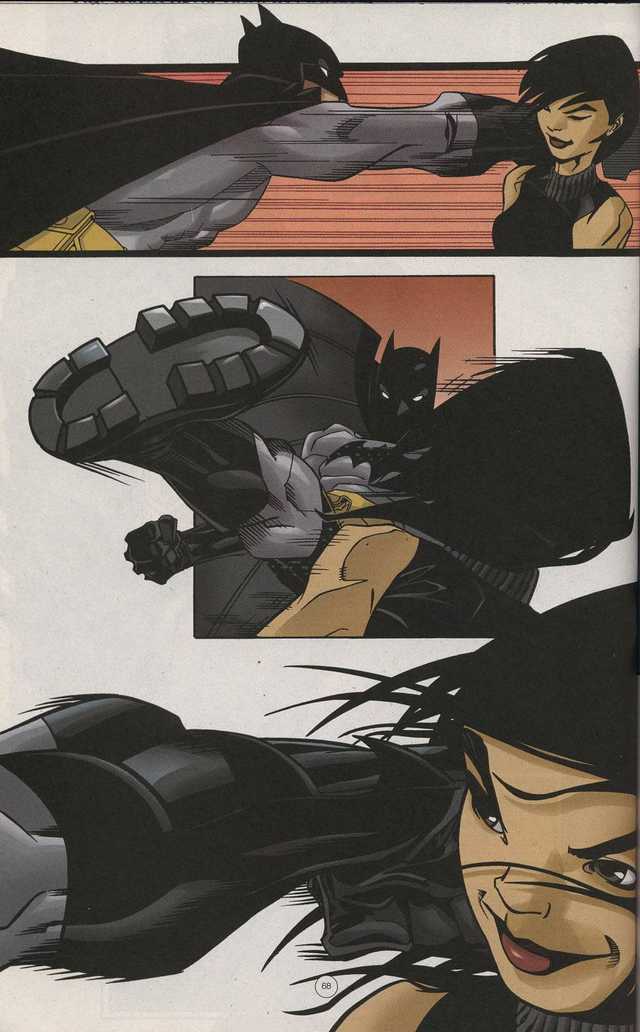 And when not holding back? Batman can't even perceive her movements. 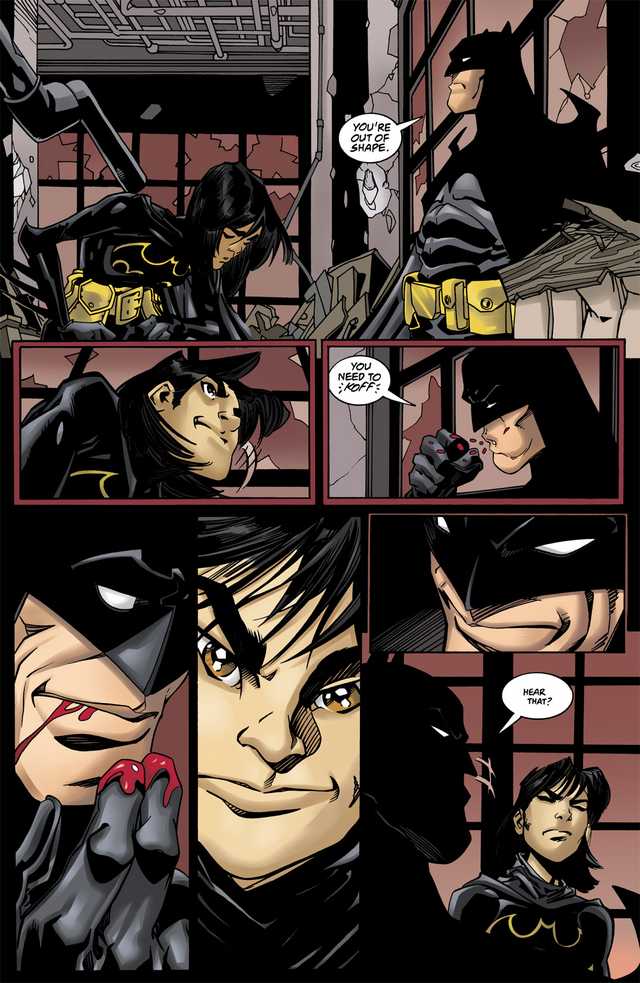 Cass beats Bruce in skill, strength and speed, which is supported by feats. She can just one-shot him like she did to Lady Shiva. 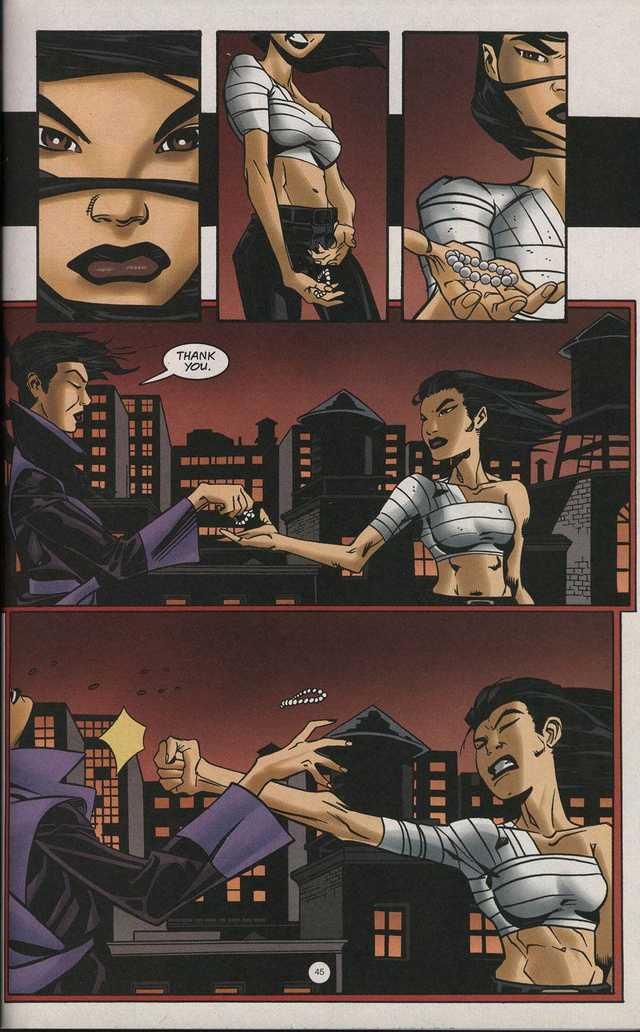 Or she could paralyze him like she did to Oracle.

Not to mention that she'd be learning his weaknesses and movements as the fight went on.

Have I made my point clear, or do you still want to rep Batman? Cause I got more scans.

Batgirl IV Wow, you have one instance while I have multiple. Really shows where the evidence points to...

Especially since you gave no response to any point I made.
Last edited: 11 mo 23 d ago.

Bodhi 11 mo 23 d
Batman vs Batgirl IV #
Batman "Cass beats Bruce in skill, strength and speed, which is supported by feats. She can just one-shot him like she did to Lady Shiva." That alone is laughable, both Batman and Jason freaking Todd one shot Lady Shiva like she's nothing. I can see why Cassandra above is batman in raw speed but not in skill and surely not in strength. 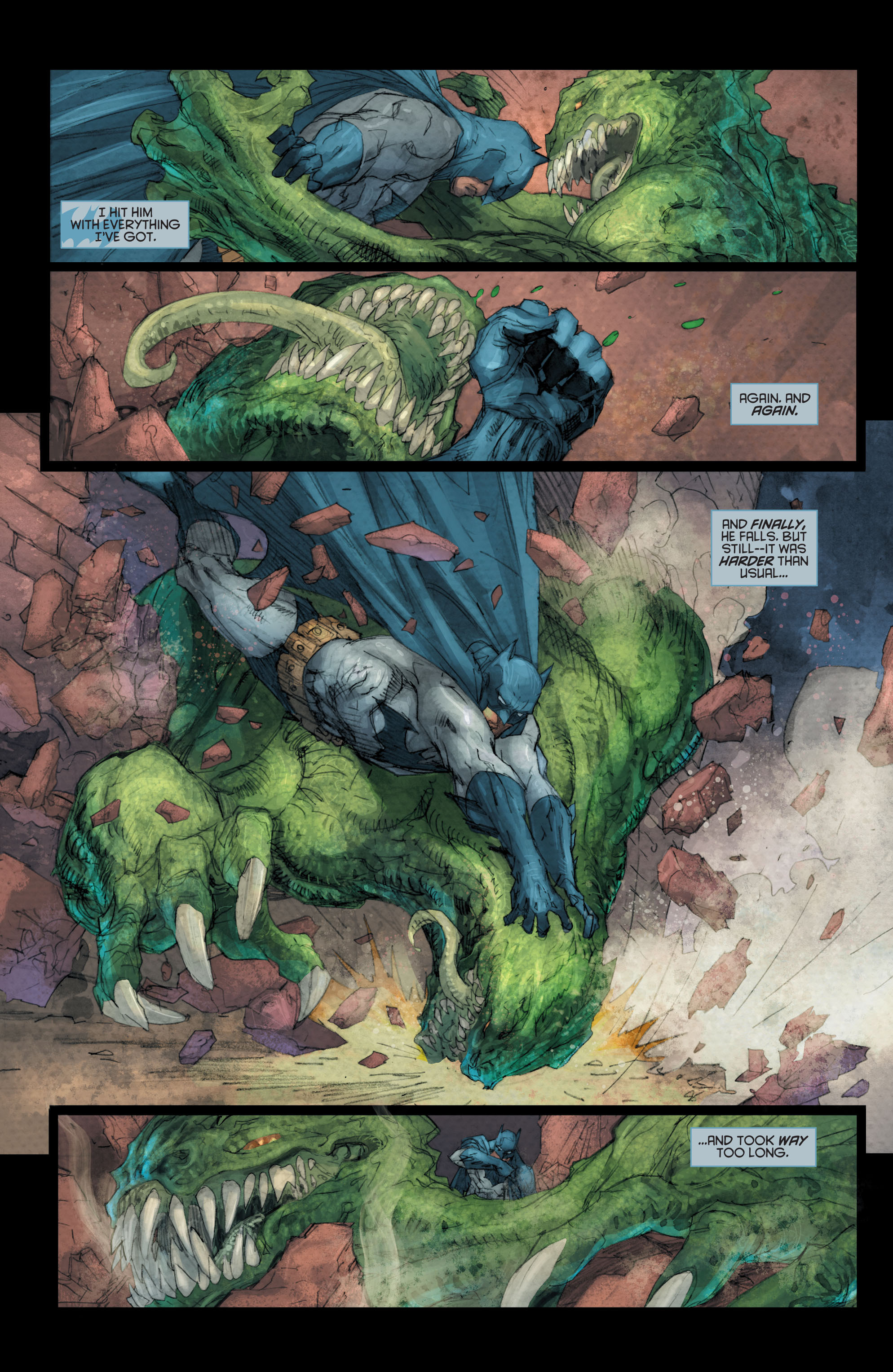 Batman LITERALLY destroyed a brick wall with Post-Hush virus Killer Croc's face. This is a strength feat, he's not sucker-punching someone but wrestling with a monster that laughs at missiles and shred metal like paper.

Here she lost her body reading ability and you can see she's terrible when relying only on her skill.
Last edited: 11 mo 23 d ago.

Batgirl IV Prove both of them have one-shot Lady Shiva. And prove Shiva wasn't holding back, because she holds back against everyone except Richard Dragon and Cass. Also wow, Batman threw Croc through a wall, doing zero damage to him in the process. So impressive... 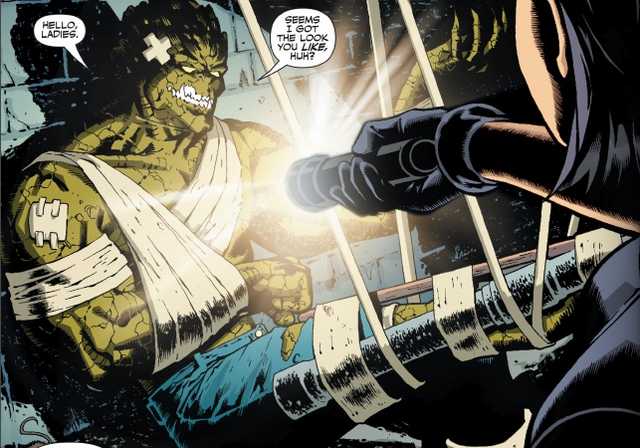 Except it's not because Shiva actually wounded Croc. Extensively. She also did so while holding back, AND while only using one arm. 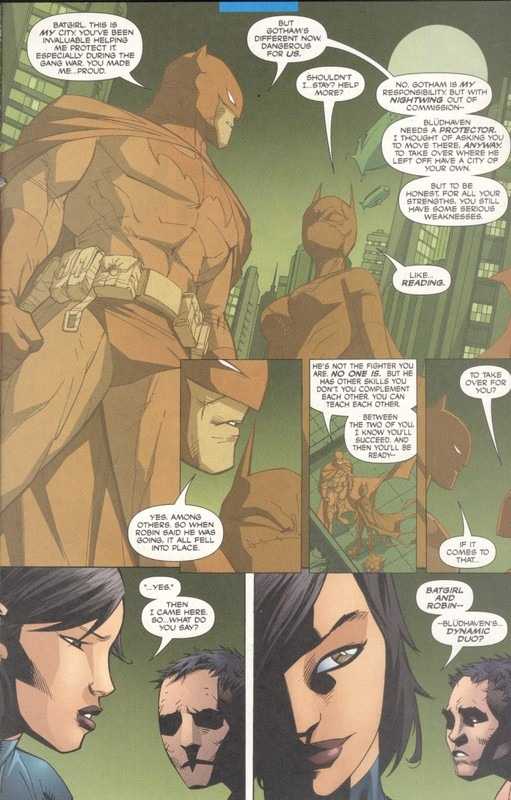 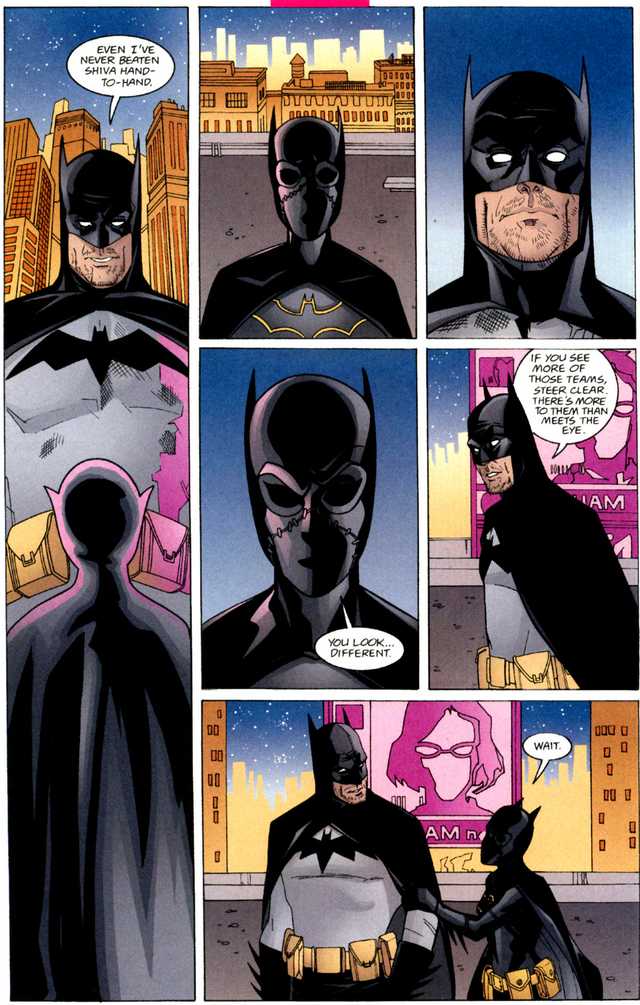 Batman himself disagrees with your assessment.

And guess what, so does Deathstroke!

The man himself explicitly said he'd lose if he and Cass had a REAL fight.
Last edited: 11 mo 23 d ago.

Like father, like son
You misinterpreted my scan, he wrestled with Post-Hush Virus Killer Croc, not base Jobber Killer Croc. And we don't use statements, feats are the real deal (Context > Feats > Writers > Comic Statements)

Batgirl IV Nice try, that was New 52 Shiva that Jason "beat." And even then it doesn't count since Shiva was holding back against Jason, and when she stopped holding back, she bodied Batman with zero difficulty.

Also imma need proof that Batman actually one-shot her and that wasn't just the end of the fight.

And who is "we" here? I can use statements when they're backed up by feats, and the various statements of Cass > Bruce are. Just because you don't use statements doesn't mean I can't, that's not how it works.

And honestly, it just sounds like you just want to ignore that Cass is explicitly said to be Bruce's superior numerous times by Bruce himself.

Also you've still ignored the other points I gave in my prior comment on how Cass will learn Bruce's movements and weaknesses just by watching him and she can simply paralyze him if she wants to.

And also how Bruce can't even perceive her movements when she's going full speed, which means he wouldn't be able to land a blow on her.

Bodhi 11 mo 23 d
Batman vs Batgirl IV #
Batman Sorry I forgot we're on superherodb, not on comicvine where we use feats. Nice try but this is rebirth Shiva and rebirth Batman, therefore that feat is not applicable at all. Here's the rest of Batman vs shiva 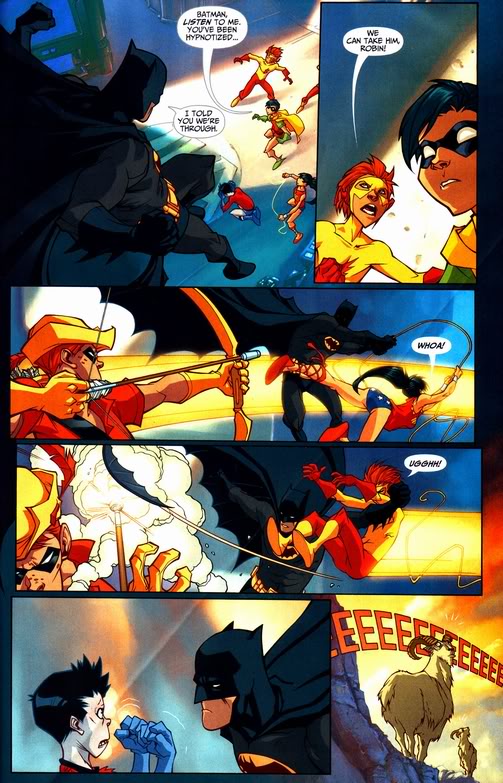 Batgirl IV Literally never said we don't use feats here, mate. And you literally used a scan from the New 52, so...

Do you have the comic that fight was in?

And really? You're using blatant outliers now? Guess I might as well bring in the time Cass bodied Supergirl... And feats disagree, Batman couldn't land a blow on a casual and suppressed Cass, which I showed. He also couldn't even perceive a full speed Cass, which I also showed. So no, he's not gonna land anything.

Bodhi 11 mo 23 d
Batman vs Batgirl IV #
Batman I meant we only use feats but whatever.
The fight is from Superman/Batman #3.
Cassandra fought Supergirl with a sword powered with red sun radiation, hardly a fight if you ask me PLUS she nearly died lmao. Batman won against Shiva so why are saying that Cassandra will dance around him when she failed to blitz her mother ?

Batgirl IV Stop saying "we," as if I have to follow what you do. I've already explained why statements are perfectly fine anyways.

Shiva was mind-controlled, so that feat is completely invalid as Shiva was not at her peak performance. So based on feats and consistent statements, Cass is superior to Bruce in skill, strength and speed.

Supergirl wasn't the reason Cass nearly died, so... and Cass has also been shown numerous times to be above Superboy and she's outmatched Bizzaro Supergirl, so...

I'm saying Cass will dance around him because that's what feats clearly show. Cass already treated Batman like a joke while suppressed and casual, and a full speed Cass was imperceptible by him. Or do I need to send the scans again? Also Cass was holding back against Shiva (a fully powered Shiva) the whole time. In fact, the only time Shiva won was because Cass LET her win.

Bodhi 11 mo 23 d
Batman vs Batgirl IV #
Batman He won when she lost her body reading ability, he doesn't have that luxury anymore

Batman He also won by gadgets once

Batgirl IV Okay guys it's time to Acknowledge how under appreciated Cass is.
show 23 replies

Batman Yeah no ravager and nightwing beat her

Batgirl IV When did Ravenger and Grayson beat her?

Batgirl IV Literally none of those are Ravager winning.
First Scan - Literally just Cass running at Ravager.
Second Scan - Is just Cass jumping over Rose.
Third Scan - Rose kicking Cass through a window once. That's not a win.
Fourth Scan - Cass explicitly stating; "I beat you before. I'm better than you." and then landing a kick in Rose's jaw.
Fifth Scan - Link still doesn't work.
Sixth Scan - Grayson landed one punch. That's not a win.

Batman Grayson did ohko her

Batgirl IV Prove he OHKOed her, and if you're capable of doing that, prove it's consistent. And that Ravager scan doesn't prove anything because again; Cass nearly killed Rose while holding back, and is consistently shown to be above her, Batman, and Deathstroke.

Batgirl IV One
Hit
Knocked
Out

Batman Lol she admitted deathstroke is stronger then her

Batgirl IV Physically stronger. Yet she still outmatched him twice WHILE HOLDING BACK.

Batgirl IV Where's your evidence she was holding back and why would she hold back against Slade a mercenary out for blood?

Batgirl IV Cass literally always holds back. It's been stated by Cass herself, and Batman.

Batgirl IV That's against common thugs but Slade is must stronger, more durable, older, and more ruthless than those thugs.

Batgirl IV Do you have any evidence that Cass would make an exception for Slade? Someone's ruthlessness is irrelevant, Cass still holds back against them, which Batman literally said in that scan.

Batman That is orphan

Batgirl IV No, it's Batgirl. Orphan is New 52 Cassandra Cain, and looks like this. 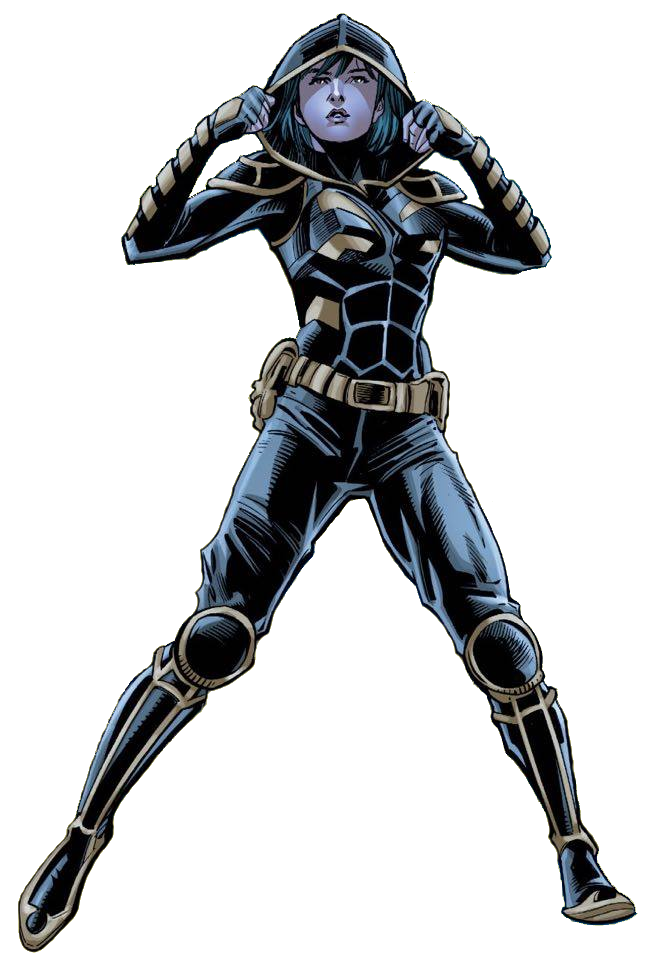 Batman Honestly stumped as to who wins

Batman While Cassandra is the most dangerous batgirl, batman has fought superman and beat him so He'll Beat Cassandra even though it would take Hours
show 9 replies

Batman She is the weakest Batgirl

Batgirl IV Do not listen to Jon, Cass is easily the most skilled and strongest member of the Batfamily. Deathstroke and Batman both stated that Cass would destroy Batman in a fight if she wanted to.

Batgirl IV Also @Blotsky, if you really wanna bring up nonsense like Batman beating Superman, Cass one-shot a monster than was toying with Superboy, and she did so while holding back.

And Superboy has thrown hands with Orion, who is comparable to Superman.

Batgirl IV When did Batman scare the Spectre

Batman He was lying because ravager beated cass @Lordtracer

Batgirl IV Feats disagree. Cass nearly killed Ravager. And she did so while holding back.
https://m.imgur.com/a/20OHY
Last edited: 1 y 27 d ago.

Batgirl IV That link goes literally nowhere. This is what I got when I put it in.

Batgirl IV That's better than what I got.