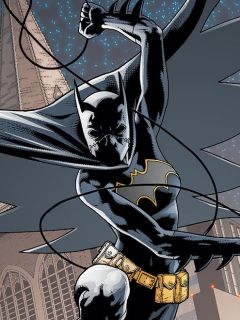 The daughter of David Cain and Sandra Wu-San (Lady Shiva), Cassandra Cain was conceived and trained from birth with the intention of creating the perfect bodyguard for Ra's al Ghul. After many unsuccessful attempts to train children from birth in martial arts to make them inculcate it like a native language (the most successful being The Mad Dog), David Cain, then a member of Ra's League of Assassins, decided the right genes were necessary to create this "One Who Is All". With Ra's go ahead Cain searched for the perfect mother for this child, finding her in the Wu-San sisters of Detroit, who practiced martial arts with each other nearly every moment of their childhood in a type of sister's language. Cain sympathized with the younger sister, Sandra, when he noticed that she held back out of love for Carolyn. To "help" Sandra reach her full potential, Cain murdered Carolyn, then lured Sandra into an ambush by the League of Assassins, where he defeated her. Cain spared Sandra from death on the condition that she bear his child, and leave her for him to raise. Awed by the potential heights she could reach in her physical talents now that Carolyn was gone, Sandra agreed to Cain's bargain in order that she might go on to become the unstoppable force of nature known as Lady Shiva: creator and destroyer. Shiva's hope for her child was that she might one day grow to be the one force that could stop her reign of destruction.

Trained by her father to be the ultimate weapon, Cassandra was not taught to speak. Instead, the parts of her brain normally used for speech were trained so she could read other people's movements and body language and predict, with uncanny accuracy, their next move. This also caused her brain to develop learning functions different from most, a form of dyslexia that hampers her ability to read and write.

When she was 8 years old, Cain decided his experiment had progressed far enough for him to test Cassandra's abilities in the real world, and took her to a hit; the target being Faizul, a 'book man' in Macau. At the time Cassandra had no idea what she was doing and believed it was only a game (an interpretation in keeping with her own reaction to what happened, and matching the interpretation of Alfred Pennyworth, an expert on children who saw a tape of events). After striking a deathblow, she "read" the target as he died, and saw death as he saw it.

In addition to scarring her emotionally, she realized murder, like her father's profession, was wrong, and she ran away from her father.

Cassandra spent the next nine years homeless, beating herself up mentally over what she'd done as she traveled the world. Entering Gotham City at 17 Cassandra came to be one of Oracle's agents in the No Man's Land of Gotham City. After saving Commissioner Gordon's life from her assassin father, she was given the Batgirl costume with the approval of both Batman and Oracle. She became Barbara's ward and in a sense, the Batman's adoptive daughter. As the No Man's Land wore on the new Batgirl was introduced to the rest of the with varying levels of acceptance. Usually going out under the Batman's watchful eye she was finally allowed to go on a solo mission when a petrol station needed guarding against a local gang. Near the end of No Man's Land Batman noticed her death wish and forced her to make a decision between suicidal actions and self preservation. She opted for self preservation.

Despite her notable handicap of being unable to talk, read or write Cassandra did remarkably well. Capable of understanding others' intentions due to her ability to read body language she was a more than capable listener, even if she couldn't reply. It was this trait that made her one of the Batman's most loyal and trusted followers and helped her to survive when the became hunted by the Blood Hawks. Although the fact that she couldn't talk frustrated Barbara Gordon she proved herself useful in other ways during a team up with the spectral vigilante Ghost in hunting down disappearing corpses. The running successes and final understanding of her mission as Batgirl allowed Batman to give her the privilege of running solo in Gotham City on the condition that she faced no 'costumed criminals' (Joker, Bane, Two Face, Penguin, etc)

From going undercover in Madras with Batman to saving local heroes from the mob Cassandra continued to impress as the new Batgirl. Especially when, despite Batman's warnings, she went face to face with a meta-human and won. She even managed to, despite her restriction to Gotham City, make it on the reserve member list of Young Justice.

But Cassandra's career was not the only thing that was growing. In the background a rift between Oracle and Batman was slowly emerging, as was the growing image of Batman as a father figure in Cassandra's eyes but the major development was David Cain's growing longing to have his daughter back.

Batman learned about Cassandra's past when Cain transmitted a tape he had made of Faizul's death to the Batcave, but Batman nevertheless continued to accept Cassandra. Things became more strained when a run-away psychic altered her mind so that she could understand words. As an after effect she lost her ability to read body language and thusly, her ability to fight. After she almost died while trying to protect the psychic from assassins Batman took away her costume and began retraining her.

The training remained ineffective however, perhaps due to Cassandra's dwelling on her lost ability instead of focusing on accumulating more, and Cassandra wanted to roam the streets, with or without the costume.

It was during one of these 'unauthorised' vigilante outings that she encountered her mother. Lady Shiva noted Cassandra's missing skills and offered to train in a way that will allow her to possess them again but in exchange they will fight in one year. A death duel. Cassandra accepted.

Cassandra began training immediately; going after every talented fighter she came across in order to gain more skills she even (after hearing about his notoriousity within the Bat-clan freed the Joker then apprehended him again in order to gauge just how good he was. Batman and Oracle deduced that Cassandra's death wish had not gone away and that it was due to guilt over her murdering Faizul. They began looking into what had brought the death wish back.

Her reckless training was interrupted when an Officer Down was called over the frequencies. Batman's longtime ally and friend, Commisioner Gordon had been shot in cold blood.

It was during yet another training session in the batcave that Cassandra first met her future friend Stephany Brown (The Spoiler).

It wasn't long until Batman gave her a cave of her own to operate from and her training crusade continued as she found even more powerful opponants like Bizzaro Supergirl and Shadow Thief during the Joker's Last Laugh as well as numerous female villians during the aftermath of Our Worlds at War. These activities had not gone unnoticed by Batman and Oracle but despite Oracle's protests Batman allowed Cassandra to continue until the fateful day arrived and Cassandra fought Shiva on the building tops of Gotham City. Shiva won the battle fairly easily, killing Cassandra with a shot to a nerve cluster near the heart but then, within a temple devoted to her, Shiva brought Cassandra back to life and requested another fight. This time, with her death wish satisfied, Cassandra Cain won and became the first to defeat Lady Shiva in martial combat. Unfortunately the victory would be short lived for Bruce Wayne was in jail, under suspicion of murder and Cassandra arrived back to the cave in time to see Batman leave. It was during an investigation into the murder that Cassandra discovered that Batman and Bruce Wayne were in fact the same person. Later she, along with Spoiler and Nightwing discovered critical clues that pointed to Bruce Wayne's innocence and, eventaully, incriminating evidense to the real culprit; David Cain.

Her father safely behind bars and no battle-to-the-death with Shiva to train for Cassandra focused on her crime fighting career.

Batman regarded Cassandra very highly. During War Games, he relied heavily on her to help control the violence of the gang war in Gotham City.

Following War Games, Batgirl moved to Blüdhaven with Tim Drake at Batman's suggestion and with his financial support (Nightwing had been injured during the War Games, and the Gotham City Police Department had declared all costumed heroes illegal). There, she quickly made a name for herself by defeating the Society of Evil. Deathstroke later took on a contract from the Penguin to kill Batgirl and decided to let his daughter Rose Wilson (the current Ravager) do the job instead. Cassandra beat Rose by critically wounding her and giving Deathstroke no choice but to get her medical attention. It was during fathers' day that Cassandra became infatuated with knowing who her mother was. Interogating all the contacts she had (including Batman and her father, David Cain) she eventually found Lady Shiva.

Cassandra also went undercover in the Justice League Elite masquerading as an assassin named Kasumi. She revealed herself to Coldcast to tell him that he was not a bad person, right before he was accused of murder.

Cassandra has gained control over the League of Assassins. She recently encountered a shocked Robin and nearly killed him in battle. She also fought with Supergirl, during which time both combatants discovered that Supergirl possessed a bio-defense mechansim enabling her to generate Sunstone crystal from her body. Supergirl stabbed Batgirl through the shoulder with one of these crystal spikes. At this time, Batgirl also fell under the sway of Deathstroke who drugged her and used her as a tool in his revitalized Titans East team. Robin provided Cassandra with the antidote and she left the team and fought against Deathstroke.
Superhero Class