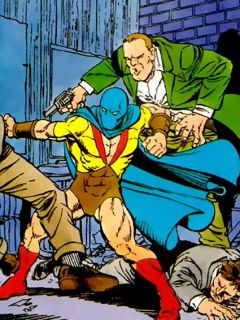 Instead of going into a career in boxing, Al Pratt decided to become a super-hero and took the name Atom. He became one of the founding members of the Justice Society of America and later joined the All-Star Squadron. He was present when the JSA battled Ian Karkull. As a result of the battle, Atom was one of those who was bathed in mystical energy which kept him young for decades. In another battle alongside the All-Star Squadron, Al Pratt fought the reluctant villain known as Cyclotron. Energy released in that battle caused Al Pratt to deveolp super-powers by the late-1940s. In the early 50s, Atom retired along with most of the JSA.

Years later, Atom came out of retirement to rejoin the JSA. He and the rest of the JSA teamed up with the JLA for the first time to battle a group known as the Crime Champions. During this adventure, Atom met Ray Palmer, the Earth-One Atom. Atom continued battling evil alongside the JSA and struck up a friendship with fellow member Wildcat. Atom's bravery inspired Albert Rothstein, the grandson of Cyclotron, to use his powers for good as the superhero known as Nuklon.

Atom joined the JSA and other heroes in the Crisis on Infinite Earths. During the epic battle, Wildcat was severly wounded. Seeing his friend crippled greatly effected Atom, who wondered if he was getting too old for the hero game. In the aftermath of the Crisis, Atom's history was changed so that he was no longer a resident of Earth-Two. Instead, he and the other members of the JSA were heroes that preceded the JLA and other heroes of the Silver Age on Earth-One. Atom and his teammates didn't have time to deal with this new information as most of the JSA was drawn into Valhala to do battle with the forces of evil for eternity

After being gone for several years, Atom and the rest of the JSA returned to Earth. Atom learned that his wife died while he was gone. He and Wildcat remained friends and visited their teammates Flash (Jay Garrick) and Green Lantern (Alan Scott). Despite his reluctance to get back into crime-fighting, Atom joined his teammates in battling a scheme concocted by their old foe, Ultra-Humanite. He stayed with JSA when the group reassembled.

A couple of years later, Atom joined his fellow JSAers in taking part in the event known as Zero Hour. Most of the JSA went to the realm known as Vanishing Point where they were ambushed by the being known as Extant. Extant taunted his foes with boasts about how he could control time. Atom didn't want to hear it and he lunged at Extant. The time-controlling villain fired an energy blast and killed Atom instantly. He then proceeded to decimate the ranks of the JSA. Waverider rescued the heroes and took them and Al Pratt's body back to Earth. Al Pratt was buried in the superhero cematary known as Vallhala.

Al Pratt's legacy lives on in the form of Al Rothstein who renamed himself Atom-Smasher in honor of his godfather. The Atom legacy is also carried on by the young hero Damage, who is the son Atom never knew he had.