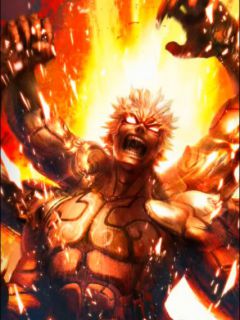 Due to his extensive training as a soldier and a member of the Eight Guardian Generals, Asura is one of the most well-accomplished fighters in the series. Unlike refined and strategist fighters like Yasha or Augus, Asura has no finesse or technique at all (although he demonstrated to have a certain degree of martial arts on several situations), his fighting style resolves about pure aggression and brute force without the use of weapons. Coupled with centuries-worth of battle experience and his unlimited power and rage has made Asura a force to be reckoned with, even to such formidably skilled warriors as Yasha, Augus, Deus and even Chakravartin himself, and additionally making him fearsome enough to decimate an army of enemies. The years of training also allowed Asura to read his opponent's moves, and thus, effectively counter-attack their attacks without sustaining damage. On several moments, Asura has shown to have significant coordination and dexterity in combat, and also be able to fight without his arms, attacking with kicks and headbutts.

Of all of the powers he possessed, his strength remains the most impressive. Asura was possibly the physically strongest demigod, and his strength has peerless destructive scales. His fists generate large shockwaves, he can shatter and defeat gigantic Gohma with a single blow and subdue Gohma Vlitra, managed to stop and lift Gongen Wyzen's finger (which had a volume of thousands of miles), and entirely destroy Gongen Wyzen afterward by punching his finger repeatedly and with devastating force. He countered and subsequently shattered Augus' Wailing Dark, a sword whose blade was strong and resilient enough to rupture the Moon and pierce the Earth from side to side, with a single bare-handed punch and being heavily injured. He reflected missiles as big as himself with ease and his blows were equal to some of the strongest Demigods in existence. Some of these feats had been achieved in his Six-Armed Vajra state. As further proof of his overwhelming physical strength, Asura killed Demigods with a single blow in his Wrath Asura form and his blows were able to harm Chakravartin, the creator of reality. In addition, Asura is able to fight opponents far stronger than him.

Another one of Asura's most prominent features: Asura has undergone a monstrous amount of mental and physical stress and has managed to survive: He has been punched, kicked and crushed by beings of similar power; he has been crushed by Wyzen's colossal finger which weights hundred of thousands of metric tonnes; he has been impaled and has survived falls from orbit several times; he has lost his arms on several occasions; survived huge beams of mantra without an injury; endured a direct hit from the Brahmastra and resisted blows from the maker of reality. Asura has also shown to be able to survive attacks with Planet busting capabilities such as Gohma Vlitra's energy beams, Wyzen's finger and even The Brahmastra. Asura in his Destructor form was capable of enduring planets and even stars thrown at him with only sustaining little damage. In terms of psychological wounds, Asura has suffered an indelible amount of emotional stress, since his wife was murdered by his fellow comrades who cruelly betrayed him, his daughter being kidnapped and a girl who accurately resembled her being killed in front of him, witnessing villagers die, meeting the one who caused all of his anguish and suffering, and losing his "brother" Yasha and his own life later on by sacrificing himself.

While not as impressive as his strength, Asura is still one of the fastest and agile beings on the universe, and it's theorized that Asura's speed is on a relativistic level by the way he was flying across space, and also whilst fighting Ryu, by going from the Earth to the Moon in roughly 10 seconds. At regular speed, he was incredibly faster than a human, and his reflexes are extremely sharp, enabling him to react, block and counter attacks from insanely fast enemies in less than a second and even from opponents theoretically capable of stopping time such as Chakravartin. However, his different forms also upgraded his velocity: on his Mantra form, Asura was fast enough to avoid and outrun hundreds of Vlitra's laser attacks launched simultaneously. He has also been seen able to easily keep up with Yasha despite his particularly extremely high speed and agility in battle. During his Destructor form, it is also theorized that Asura left the solar system in a matter of seconds, thus making him vastly faster than the speed of light.

His Mantra affinity is Wrath. This signifies that Asura's strength and power are proportionate to his level of rage and anger. This plays a major role in the series as it allows Asura to constantly build up and increase his Mantra output to what could be infinite levels the more rage he builds up. Yasha once questioned Deus as to how Asura's Mantra levels could match those of the Seven Deities, even after accumulating over seven trillion human souls worth of Mantra to enhance their powers. Even the Mantra God Chakravartin was appalled by the full ferocity of Asura's Mantra. Using his Mantra, Asura could manifest his halo to acquire greater power and his capabilities includes producing fist-channeled blasts of varying size and intensity with homing properties, enhanced striking strength by concentrating mantra in his fist, multiple mantra based attacks (such as powerful shockwaves, beams, and bursts), jumping ability of extraordinary distances, flight at insane speeds, even the generation of colossal Mantra-based arms constructs. But as incredible his power may be, Asura's only flaw is that his Mantra is too fierce for his body to contain alone and due to this it can make him unconscious and at extreme cases death. This was later remedied when Yasha installed the Mantra Reactor into his body to regulate the flow. Asura is also one of the rare entities capable of numerous transformations, which trigger as his Mantra levels escalate. He could also accumulate massive amounts of mantra in his fist and then release it when striking his target, generating an enormous mantra beam which could greatly weaken foes with extreme amounts of resistance and durability such as Deus and Chakravartin. Asura has also shown to be able to resurrect after death via his sheer rage, determination and thirst for vengeance not letting his physical body and spirit die, which lead him back to the world of the living angrier and stronger than before.

Such as the other demigods, Asura had longevity and was unable to age. Furthermore, he could also survive in areas such as outer space or the moon without any form of discomfort. Also, Asura could release himself from being petrified within a few seconds. He couldn't be killed by normal means and can only be destroyed by other deities or the Gohma. Asura also possessed regenerating abilities that allowed him to regenerate his six arms if one or more of them were destroyed.