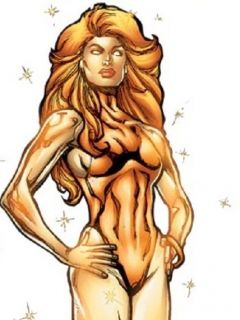 Ardina was created magically, by stabbing Silver Surfer with a ritually prepared dagger, in order to create a female counterpart for him. This was done as part of a plan to restore Surfer, Namor, Dr. Strange, and the Hulk to sanity.

The Defenders are the banished to a far off land but are rescued by Christopher Ganyrog and Pamela. They are informed by their rescuers that the are on the planet Yann, and the it was Yandroth who was manipulating the The Order.

As most of the heroes of Earth battle the Order, the Defenders and the Warriors of Yann join the fight. After Yandroth's manipulations are revealed the Order break the mind control and help the other heroes take down the threat. The people of Yann return the creature to their world, and Papa Hagg invite the female Defenders to a spa two dimensions over which they accept..

After the Civil War, Ardina was considered by Tony Stark as a potential recruit for the 50-State Initiative