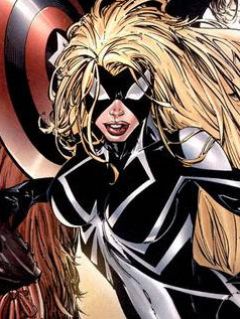 A secretive government group called the Commission decided to create their own superhero. Val Cooper met college friend Julia Carpenter in Denver, and convinced her to be part in an "athletic study". She was unknowingly a test subject in their experiments. During the experiment, they "accidentally" injected Julia with a mix of spider venom and exotic plant extracts, which gave Julia powers very similar to those of Spider-Man. Not long after she was given identity of Spider-Woman, she was drawn into the first Secret Wars. After returning to Earth, Julia joined Freedom Force but much like her predecessor, found herself on the wrong side of the law. She teamed up with Spider-Man occasionally, but eventually found herself as a freelance hero. When one of her assignments led her to California looking for a team of Asian super-villains, she met and assisted the West Coast Avengers several times.

She then found her place with the West Coast Avengers and once they disbanded, joined their spin-off team Force Works. Julia's main enemies were the arachnid-based team called Death-Web, which consisted of three super-villains who were created by the Commission, using a variation of the same serum that transformed Julia. When Mike Clemson, founder of Death-Web, captured Spider-Woman's daughter Rachel, he blackmailed her into fighting Spider-Man, even though she nearly killed Spider-Man, she couldn't commit murder, and Spider-Man helped her rescue Rachel. Eventually, Julia walked away from the superhero business to concentrate on raising her daughter. Like Jessica Drew (the original Spider-Woman), Julia was also attacked by Charlotte Witter and had her powers stolen. After the loss of her superpowers, Julia returned to the life of a normal mother.

Julia was paralyzed for several months after she lost her powers, even though all of her other injuries had healed. The Shroud's company synthesized a duplicate of the serum that originally provided Julia with her powers, and these returned several days after it was administered to her. With the Shroud's help, Julia underwent intense physical therapy and was soon able to walk again. It was during this time that she and the Shroud fell in love.

Her powers now restored, Julia returned using the codename "Arachne" (which she originally intended to use). During the Super-Human Civil War, Julia registered under the Superhuman Registration Act, and she and Wonder Man aided Ms. Marvel in the training of novice superheroes.

However, Julia was actually a double agent; when she first responded to Iron Man's request, she thought they would be helping people escape registration. She tipped off several targeted superheroes who had refused to register with the government, such as the Prowler. She was romantically involved with the Shroud, an opponent of the Superhuman Registration Act.

Julia was found out when a captured Prowler revealed under interrogation that she had tipped him off. A government strike team led by Ms. Marvel, including Wonder Man and Arańa, attacks Julia at her home just as she was about to flee the country with her daughter. Julia was captured and summarily incarcerated. However, Julia escaped captivity during the Negative Zone prison break, and returned to Colorado in search of Rachel. A S.H.I.E.L.D. Psy Ops team telepathically traced her to Brooklyn, where she furiously confronted Arańa, demanding to know where her daughter had been taken.

She spent some time living in Canada and working with the Canadian government as part of Canada's new superhero team Omega Flight. She was given the option of having her outstanding charges dropped in exchange for her participation on the team. After a battle against the Wrecking Crew, Julia decided to stay on the team. She helped the team expose Dr. Benning who was using her position with the Canadian government to force an addiction on the new Guardian, Michael Pointer, by feeding him the mutant energy of captured criminals.. With the departure of most of Omega Flight's members, Julia eventually returned to America.

Julia was dragged into Sasha Kravinoff's Grim Hunt of Spider-Man as a means to resurrect her husband Kraven the Hunter. After the unsuccessful attempt at resurrection through the sacrifice of Mattie Franklin, the third woman to take the name Spider-Woman, Julia was captured by the Kravinoff family alongside Arańa to be further sacrifices. As Spider-Man put a stop to their scheme, the Kravinoffs' most important prisoner, Madame Web was mortally wounded. In her final moments Madame Web transferred her telepathic, precognitive and astral projection powers into Julia - making her blind, the new Madame Web and weaver of the Spider family.

Julia's first action in this role was to prevent Peter from killing Kraven, explaining to Peter that he was the center of a moral web that would be destroyed if he killed Kraven, advising him that this murder, however justified, would turn him into a ruthless destroyer. After burying Kaine and Madame Web in a potter's field, she explained her new purpose to Spider-Man and Arańa before teleporting away. Afterwards, Julia gave her Arachne costume to Anya so she could become the newly christened Spider Girl.

When the population of Manhattan developed spider-powers, Julia observed the crisis with Shang-Chi, preventing him from intervening until Spider-Man was accidentally attacked by the New Avengers when he tried to help out. Later, as Anti-Venom worked on curing the individuals affected of their spider-powers, she reflected on the need for both Venom and Anti-Venom to fix the Spider-Island problem. At the final battle of the Spider-Island, she soon realized that Kaine (who had been cured) was the one who was willing to kill, unlike Peter, thus seeing him as the last hope of killing the Spider-Queen.

After the Spider-Island events, Julia aided Spider-Man during a "race against time" mission to stop a catastrophe that could destroy the entire city. She warned him that he had to do this work by himself without the aid from either the Avengers or the Future Foundation. After the danger was averted, Julia congratulated Peter for the efforts.

Shorlty before Doctor Octopus swapped his mind with Peter Parker's and temporarily became Spider-Man, Madame Web suffered an overload of her powers as a consequence of presaging the death of Spider-Man, witnessing every point in the future for a split second before falling into a coma. Luckly, she had previously foretold this event, for which she called for an ambulance before she collapsed, and was taken to a hosptial.