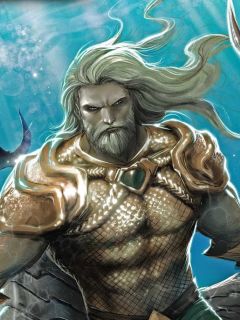 The Atlanteans are an offshoot of humanity that is biologically adapted to the deep ocean environment. For most Atlanteans, this means that can breathe underwater, endure the pressures of the deep (among other adaptations), and can only spend a very limited time out of water. He also possesses superhuman levels of strength, speed, endurance and durability, all by-products of his body being adapted to survive unprotected in the tremendous pressures of the ocean depths. Although other Atlanteans possess similar adaptations, Aquaman's royal lineage makes him a super-Atlantean as well as super-human, and as such he has greater physical capabilities than does a typical Atlantean.

Aquaman, as an Atlantean, can breath underwater and on land. He can be immersed indefinitely without suffering any ill effects but being super-Atlantean due to his royal lineage, he can survive on land longer than an average Atlantean. This length can be extended by the humidity in the atmosphere but eventually prolonged dehydration will weaken him thus he must return to aquatic enviroment at various period.

His ability to see in the murky depths of the ocean allows him exceptional night vision while on land. He has claimed that his eyes are adapted to see at 6,000 fathoms (or 36,000 feet below the surface of the water).

Aquaman possesses superhuman strength on the order of 150 times human maximum, but his strength is always underrated, considering the company that he keeps. His strength is more than a match for most barriers such as wood, metals, brick or concrete walls. Only extremely durable metal reinforced barriers, have any chance of slowing him for any length of time. Aquaman frequently displays feats of Super-Atlantean (the average Atlantean can lift/press approximately 2 tons) and Superhuman strength. While not on par with Superman, he has proven capable of performing standing high jumps of 4 stories (both on land and from water), lifting and throwing a tank (at least 25 tons), and even managed to hold out for an incredible length of time against Wonder Woman in combat. His strength would appear somewhat dependent on how hydrated he is as he was capable of lifting a considerable chunk of a city block in Sub-Diego, and has proven capable of shifting an oil rig platform which would weigh thousands of tons as well.

Aquaman possesses strength and stamina that allows him to swim up to 150 mph for at least a 4 hour period without significant breaks for rest or recuperation.[citation needed]

Aquaman's enhanced physiology enables him to withstand impacts that would kill and ordinary human, and critically injure an average Atlantean. He has been seen in ocean depths as deep as 20,000 feet (3.79 miles) below the surface of the water.It seems that Aquaman has been able to travel as deep as 36,000 feet (6.82 miles) considering that he claims that his eyes have been adapted to see at that depth. He is not completely durable against large fire arms, but is able to take a direct hit by small arms fire without incapacitation. Regular bullets are shown to make him bleed but otherwise glance off his thick skin.[citation needed]

Aquaman is extremely resistant to energy/heat based attacks as he has with stood multiple blasts from Amazo's heat vision, Black Manta's heat beams, and energy blasts from an OMAC.

Aquaman's regular speed is approximately 100mph swimming underwater, although slightly less on the surface. In times of distress this has shown to drastically increase, and he has reached 1,000 knots.

While no speedster, Aquaman's reflexes are superior to even near metahumans such as Deathstroke the Terminator, and his reflexes are on the order of 12-15 times faster than a normal human. Aquaman is probably the greatest swimmer in the world.[citation needed]

Aquaman has the ability to communicate directly with sea life and has done so throughout most of his life. Lately he possesses a greater range of control that can actually force sea creatures to obey his whims. Currently, he requests their assistance and they comply. He has chosen to continue to request since, if he forces them to comply, they will ultimately lose respect for him. He now also has access to a quantum field phenomenon called "the Clear". "The Clear" quantum phenomenon has been observed with the subject called the Swamp Thing who called it the Green or the Morphogenic Field of Animal Man (also called the Red). Aquaman is also an accomplished telepath in general and can perform such telepathic feats as mind to mind communication, mind probes, mental domination of a non-aquatic mind, and mental attacks. The potency of such mental domination is unclear but he has been seen to use his powers to great effect against the White Martians and Doctor Polaris.[citation needed]

Aquaman has the ability to sense the primal emotions of aquatic creatures through "The Clear". The Clear seems to function as a universal consciousness of all sea life. Via it he can communicate or command sea life on the other side of the planet. He can see what they see and much more what he is only beginning to realize. He can also push his telepathic powers to reach out to the higher land creatures to find that element of their brains that was once an aquatic dwelling creature. This may account for Aquaman's facility with language.

Aquaman is a master swimmer. Perhaps the greatest there is.

He has an advanced strategic sense, and has natural leadership qualities.

His natural autocratic nature does not suit him well in environments where democracy is an issue but Orin is a natural commander and his ability has served him well in the protection of Posidonis.