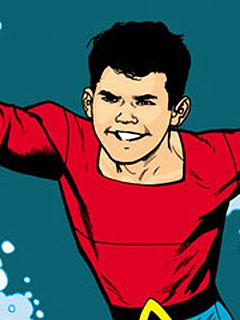 Garth's origin is similar to that of his mentor. He is an amphibious humanoid who was left to die because of ancient Atlantean superstition and prophecy. Tempest was a prince of the Idyllists, a colony of Atlanteans that settled in the Hidden Valley 4,000 years ago. There, nestled in the capital city of Shayeris, the pacifist Idyllists became rabid builders and collectors, architects and artisans, and eschewed physical violence at all costs. The Idyllists were also practitioners of magic and kept an extensive library of mystical texts and scrolls.

Approximately four decades ago, King Thar and his wife Queen Berra, became the reigning monarchs of Shayeris. Thar had inherited the throne and access to ancient magical energies that his brother Zath, a powerful magician in his own right, believed to be rightfully his. Zath practiced dark sorcery and necromancy, the raising of the dead, and was eventually banished from the Hidden Valley. His body transformed into disgusting, half human form, Zath, renamed Slizzath, returned to Shayeris twenty years later with an army of undead. He planned to invade the Hidden Valley and transform it into a necropolis he would rule.

King Thar knew of this and assembled an armory of robots and weapons to stop his demented brother. But the Idylist radicals killed him and banished his pregnant wife Berra back to Atlantis. Before Thar was killed, however, he was able to cast a magical spell that trapped Slizzath in an otherdimensional prison. Unfortunately, this spell was linked to a magical ritual which would give his offspring access to incredible mystical powers and accessing that ritual would give Slizzath the energy required to break free of his prison. So word was sent out that all babies born with purple eyes, the Idylist mark of power, should be banished and killed, lest they try to perform the access ritual and accidentally free Slizzath and his undead army. The Idylists also claimed that Thar had gone insane to hide their complex, fearful plan.

In Poseidonis, one of the domed cities of Atlantis, Queen Berra gave birth to her baby boy, Garth, who was born with purple eyes. The Atlanteans claimed Garth had been born genetically inferior and sentenced him to death on a seabed leagues away from Atlantis. But, with the secret help of Aquaman's father, the Atlantean sorcerer Atlan, the young Garth not only survived but thrived. It was Atlan who taught Garth language and survival rituals and kept the young boy from going feral as he scavenged his way through the undersea. Garth did develop an intense fear of schools of fish, however, that haunted him into his teens.

He was one of the founding members of the Teen Titans, and has been been a member of that team in many of its incarnations although later as a reservist since he began to feel he was of little help out of the water. His girlfriend for many years was Aquagirl, until her death during the Crisis on Infinite Earths.

As a result of his grief and repeated telepathic abuse by Mento, among other factors, Aqualad lost his ability to control marine life. While he later regained this power during the Millennium event, it came with the condition that his commands must now be phrased as requests to the creatures to perform desired actions, although the animals apparently need little persuasion.

Shortly before Zero Hour, it was Garth who convinced Aquaman to come out of his depression and back into action. The two of them investigated a down submarine and fight a villain named Charybdis. During the battle, Garth at one point thinks he spots Tula in the distance. After disagreeing with Aquaman leaves his mentor swimming off with Dolphin, Garth decides to investigate the Tula sighting. It was not, in fact, Aquagirl, but a "shark-girl". Garth is captured by her people and chained up to a rock, left to be killed by a deadly whirlwind. He is rescued by Aquaman's father,Atlan, who transports him to another dimension.

Atlan takes Garth to the Grotto, a convergence between difference dimensions, and spends the next several months to a year(although only days or weeks pass on Earth) training Garth in his mystical heritage, preparing him for his eventual role as the guardian of all undersea humanoid communities. In addition to other magical abilities, Garth can affect the water with blasts of freezing or boiling energy. He returns to Earth and helps Aquaman fight off an invasion of the Hunter/Gatherers. When they are victorious, he leaves with Atlan again for a new mission.

Atlan takes Garth back to the Hidden Valley where he has to battle Slizzath, who has intentions of conquring all the oceans. Garth adopts his new name, Tempest, and is confronted by a resurrected Tula (only to have her die again) and comes out of the experience older and more mature, with a new confidence in himself (and a new uniform).

Tempest resumed his role as Aquaman's right hand man and also joined the newly reformed Titans along with his old friends. Some friction arose between the two heroes when Aquaman's lover, Dolphin, left him for Tempest, but the two have since resolved their differences.Tempest proceded to get Dolphin pregnant and temporarily freaks out over it. Tempest and Dolphin decided to get married shortly thereafter. The Titans came to Atlantis to attend the wedding. (See the Talk section for more on this plot twist)

Dolphin gave birth just as Atlantis was being attacked by the island nation of Cerdia. The baby was kidnapped by Ocean Master, who had orchestrated the war, but was successfully rescued. After the war, when Atlantis annexed the island, Garth decided to name the baby Cerdian as a gesture of goodwill (nicknamed Ian).

Garth had recently assumed the duties of king of Atlantis after Aquaman had abandoned both the kingship and role as Aquaman.

Garth was recently attacked by the possesed Aquaman, Tula and Dolphin who were Black Lanterns. Garth fought off Tula and Dolphin until he was stabbed in his chest and died instantly, Aquaman left him to fight Mera. Upon his death, a Black Lantern Power Ring flew onto his finger and attached itself bringing him back from death as a possessed being. Garth then stood beside his deceased wife, former girlfriend and adopted father as part of the Black Lantern Corps.