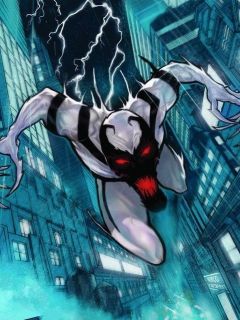 The Symbiote has augmented all of its host's physical abilities to superhuman levels equal to, and in some cases greater than, Spider-Man's.

Superhuman Strength: Before the symbiote was created Brock had conditioned himself to lift (press) 700 lb. Once it was created, the symbiote added Spider-Man’s superhuman strength to Brock’s vast human strength, enabling him to lift over 70 tons. However, this is not his true limit as his strength increases with his variable muscle mass.

Superhuman Durability: Anti-Venom's body is highly resistant to physical injury, capable of withstanding assault from high-caliber bullets as well as attacks from super powered individuals. When distributed at a typical thickness over Brock's body, the Symbiote is capable of absorbing bullets from small-arms weapons firing conventional ammunition. The Anti-Venom symbiote is invulnerable to the traditional weaknesses of symbiotes, fire and sonics.

Superhuman Stamina: Anti-Venom is also capable of surviving in harmful areas for long periods of time such as underwater or in toxic gases, the symbiote filtering breathable air to the host.

Accelerated Healing Factor: Additionally, the symbiote is capable of healing injuries in the host at a faster rate than normal human healing allows. The symbiote is also capable of healing injuries and illnesses that current human medical care cannot such as cancer. This is even more advanced for Anti-Venom, such that it can regenerate from a shotgun wound to the head in a matter of seconds. The symbiote produces antibodies that can "cure" a person afflicted by radioactivity, parasites, diseases, and drugs.

Genetic Memory: The symbiote possesses some limited psychic ability, making it capable of obtaining information from its hosts and even other people and symbiotes simply by touch. It can however, be forced to forget information if the symbiote is inflicted with heavy trauma.

Offspring Detection: The symbiote is also capable of psychically detecting its offspring, however with effort this ability can be blocked.

Wall-Crawling: The symbiote is capable of Spider-Man’s ability to cling to walls by controlling the flux of inter-atomic attraction between molecular boundary layers.

Webbing Generation: Anti-Venom can shoot strands of the alien’s substance. The symbiote’s substance seems to be composed of tough, flexible fibers of organic polymers, which regenerate swiftly after "shedding". The one limitation to this ability was used to Spider-Man's advantage during their second bout; since the webbing itself comprises the costume, if Anti-Venom uses too much it will be rendered vulnerable since the symbiote is unable to replenish its lost mass for a short period of time while exhausted. Brock implements the symbiote to form webbing, as well as tentacles or tendrils that he would use to attack or ensnare his opponents.

Constituent-Matter Generation: Anti-Venom can also use the same substance comprising the symbiote in the form of constituent white matter or tentacles, and uses it in this method for lethal force against criminals. Anti-Venom can send a part of the symbiote and direct its movements into a victim's body, smothering them from the inside.

ESP: Anti-Venom also possesses an extrasensory ability similar to Spider-Man’s spider-sense. This response is not as complicated as Spider-Man’s inherent sense since the symbiote can detect danger from every direction and conduct giving Brock plenty of response time. This is a lot more efficient than Spider-Man’s spider-sense because it takes less time to sense the danger, and Brock’s reflexes are faster than Spider-Man’s when the symbiote enhances them. Note, for instance, how Anti-Venom can dodge a gunshot or a relatively close barrage of bullets.

Camouflage Capabilities: The symbiote is capable of mimicking the appearance of any form of clothing, camouflaging with its surroundings rendering him invisible, and even mimicking other people. Brock's preferred form of clothing was a white shirt, jacket and pants.

External Symbiote Rejection: Upon being assaulted by Mac Gargan, the Venom symbiote attempted to leave Gargan to bond with Brock again. However Brock's skin was caustic to his former symbiote, which means the white symbiote has the ability to reject the Venom symbiote and presumably all of its children as well. However, it was later revealed that, if Eddie releases too many anti-bodies while curing people, it is possible for this power to be weakened and another symbiote can bond with him, as the Venom symbiote did for a while.

Constituent-Matter Manipulation: Anti-Venom can manipulate its matter to enlarge or stretch its body in order to augment its attacks. For example, it enlarged its host's fist and slammed it into Mac Gargan, magnifying the impact of the blow. Anti-Venom is capable of morphing its host's hands into objects, such as to form a blade (similar to its symbiote nephew, Carnage) or fabricate a shield.

Impurity Sense: Anti-Venom can sense foreign substances within a person's body. This includes symbiotes, radiation, narcotics, viruses, and other diseases.

Internal Bodily Cleansing: After sensing an impurity such as toxins, drugs, diseases, and other malignant substances, Anti-Venom can forcefully "cure" the substance from the person's body using antibodies produced by the symbiote. Eddie Brock used this ability to almost completely destroy his old symbiote and to cure a teenaged girl from her heroin addiction. This power can also be used to depower some superhumans, in one case almost ridding Spider-Man of the radiation in his blood when attempting to destroy remnants of the Venom symbiote, and nearly cleanses Radioactive Man of his powers in a similar fashion. Following Anti-Venom's use of this ability on him, close proximity to the symbiote causes Spider-Man's powers to diminish and disappear (this is also why the symbiote does not trigger Spider-Man's spider-sense).

Spider-Power Negation: After attempting to cleanse Spider-Man of his symbiote remnants and nearly purging the radiation from his blood, whenever Anti-Venom is too close to Peter, his powers are effectively canceled until enough distance comes between Peter and the Anti-Venom Symbiote. Alternatively, when Anti-Venom ensnares Spider-Man by binding him with the bits of matter fired off as webbing, it negates Spider-Man's powers until he breaks free from it.

Fire immunity: In contrast to the other symbiotes, Anti-Venom is immune to fire and extreme heat. Examples of this include withstanding the full force of one of the Punisher's flamethrowers and enduring a super-hot, radioactive blast from Radioactive Man, which was meant to immobilize Venom if that symbiote went out of control.

Sonic immunity: Besides immunity to fire and heat, Anti-Venom also shows strong resistance against sonic-based attacks. For example, it was capable of withstanding Songbird's sonic-blast with little discomfort.