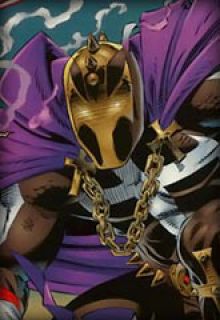 The first Redeemer, or Anti-Spawn, as he was referred to at the time, was Jason Wynn, the very man responsible for Al Simmons' death, and therefore indirectly responsible for his transformation into a Hellspawn. Through nuclear diffusion, his body and soul were melded with Angelic Fire, Heaven's answer to Hell's Necroplasm. The Angelic Fire causes Wynn a great amount of pain and suffering, which can supposedly only be alleviated by Spawn's defeat. Frenzied with pain, the Anti-Spawn mercilessly attacks Spawn, who is seemingly unable to defend himself against this new threat. As the Anti-Spawn was about to deliver the killing blow, a distraction provided by the bums in the alley gave Spawn an opening to defeat the Anti-Spawn. Wynn was recalled to the space station, where he was to be infused with even more Angelic Fire seemingly due to his lack of purity preventing him from harnessing its true power. This apparently failed and Wynn was returned to earth with his mind wiped of the events.